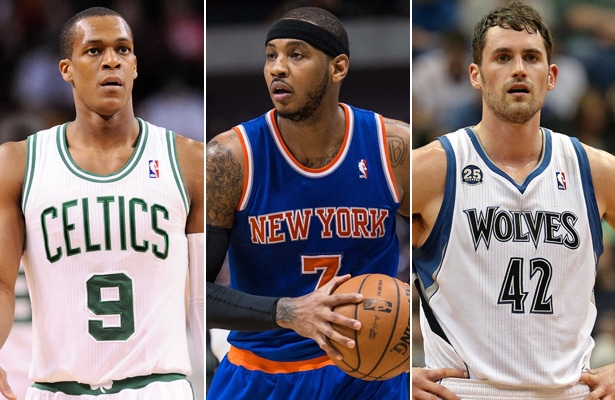 The NBA offseason is almost here, which means trade talk will start to heat up once again. Who will be the biggest name on the move in the near future? Lang Greene, Eric Pincus and Tommy Beer weighed in for this week’s Head to Head.

The Boston Celtics (25-55) are in the midst of just their sixth 50-loss campaign in franchise history. The woeful 2013-14 campaign also marks the first time in the last six seasons the team has failed to reach the playoffs. Make no mistake, the Celtics didn’t enter the this season with any false notions of grandeur but dwelling in the league basement is not a position Boston fans will ever grow accustomed to enjoying.

Gone are future Hall of Famers Kevin Garnett, Paul Pierce and Ray Allen, who led the Celtics to the 2008 championship and another Finals appearance in 2010. Gone is veteran head coach Doc Rivers, who is now preparing the Los Angeles Clippers for a playoff run on the west coast.

The new-look Celtics feature a 37-year-old rookie head coach in Brad Stevens and are led at the top of the rotation by Jeff Green, Avery Bradley and Jared Sullinger. Not surprisingly, the team finds itself headed to the draft lottery in full rebuild mode.

However, the unit isn’t devoid of an elite talent. Former All-Star point guard Rajon Rondo is still in the fold, but many are wondering if the playmaker is truly part of Boston’s long-term plans or if he will ultimately be exiting the organization much like Allen, Garnett, Pierce and Rivers.

Rondo is still regaining his form from a torn ACL suffered in January 2013, but has significantly improved since his first action of the season. The guard has appeared in only 29 games this season and is averaging 11.8 points, 9.7 assists and 5.3 rebounds.

But is Rondo truly part of the Celtics’ long-term vision, or will the team look to secure some assets for him this summer?

Celtics president of basketball operations Danny Ainge has remained consistent in his public message, which implies Rondo is definitely part of the team’s future and he won’t be dealt. However, there remains plenty of whispers around the league that Ainge continues to listen to overtures for Rondo and may be willing to part ways with the former All-Star for the right price.

Complicating matters for the Celtics is the fact Rondo will be entering the final year of his deal next season. Rondo is set to earn $12.9 million in 2015 and unrestricted free agency awaits next summer where the team could possibly lose him for nothing in return.

Rondo recently told the Boston Globe that the mounting losses this season were taking its toll on him and there are sure to be a few contenders who will give him a call if he does indeed hit free agency next summer.

The question is will Ainge roll the dice on Rondo? The Celtics, in all likelihood, won’t be in contention next season so Boston has to at least explore the option of dealing Rondo this summer.

The Minnesota Timberwolves (40-39) haven’t made the playoffs since 2004, the longest drought for any team in the NBA.

Kevin Love is finishing up his sixth NBA season, with nothing to show for it outside of individual accolades.

The Wolves won’t have cap room this summer and, barring a lucky lottery win against long odds, the franchise will have the 13th pick in the 2014 NBA Draft.

Is there a path to playoff success for the Wolves over the next year or two — one that Love can buy into?

The All-Star forward can opt out of his final year at $16.7 million after the 2014-15 season.  It may be a tall task for Minnesota to give him a significant reason to stay.

Big market franchises like the Los Angeles Lakers and New York Knicks expect to have cap room over the summer of 2015, with Love a serious target.  The Wolves can’t afford to let one of the top power forwards in the league walk without some sort of compensation in return.

Minnesota can try to milk one more season out Love, but to what end?  The Wolves can try to deal him before the trade deadline in February of 2015, but in-season trades have greater restrictions (no sign and trade, roster max at 15 player).

Will teams give their best offers to Minnesota mid-season, to rent Love for a few months — especially teams who can just wait to try and sign him in July?

Now is the time for the Wolves to cash out Love.  A number of teams might be willing to trade draft picks for this June’s solid class of prospects.

The Boston Celtics and Lakers should have at least top-seven picks.  The Phoenix Suns can offer multiple picks, although not quite as high as Celtics or Lakers.

A deal might need to be agreed to before the draft, but executed in early July, after the NBA’s moratorium, where a team like the Lakers will have significant cap room.

Other teams that may also have interest and assets to offer include the Cleveland Cavaliers, Charlotte Bobcats, Dallas Mavericks, Detroit Pistons, Orlando Magic, Washington Wizards and Utah Jazz — although most would be hesitant to give up much without a strong belief that Love is willing to commit long-term.

They might not get that promise from Love (shown perhaps through an extend and trade, or contract opt in on his final year), which might limit Minnesota’s choices.

That issue only grows the longer they wait, which is why it should be a priority for the Timberwolves to move Love this summer, before they lose one of the league’s best players without compensation.

Carmelo Anthony is the Knicks best player. He is playing arguably the best basketball of his career.

When he opts out of his contract this July and becomes an unrestricted free agent, the Knicks can pay him $30 million more than any other team.

Carmelo was born in New York and always wanted to play for his hometown team. The Knicks organization has benefited greatly from Anthony’s arrival, as he helped return respectability to a wayward franchise. Yes they struggled mightily this season, but to prior Carmelo coming to NYC the team hadn’t won a playoff round since 2001, nor had they captured the Atlantic Division crown in nearly two decades.

So, it’s fairly obvious that Knicks should do everything possible to keep their superstar; and that Anthony should quickly sign an incredibly lucrative long-term contract keeping him in New York for another five years, right?

As has been detailed in previous columns on this site, committing upwards of $110 million dollars to a 30-year old Carmelo Anthony is probably not the Knicks most efficient use of funds. It may seem counter-intuitive, but when the big picture is put into focus, resisting the urge to retain their best player is likely the Knicks best course of action.

New York will shed major salary from their books in July of 2015. The 2014-15 season is the final year on the contracts of Amar’e Stoudemire, Tyson Chandler and Andrea Bargnani. New York will clear a whopping $49.6 million in salary in one fell swoop. As a result, the Knicks could potentially enter July of 2015 as major players in the free-agent market – when such stars as Kevin Love, LaMarcus Aldridge, Rajon Rondo, Paul Millsap, Marc Gasol, Al Jefferson, Tony Parker, Goran Dragic, Roy Hibbert, DeAndre Jordan, etc. may be up for grabs as unrestricted free agents.

If Anthony is not taking up $22+ million, New York could be looking upwards of $45 million in cap space, which would allow them to go on quite the shopping spree that summer.

From Anthony’s perspective, it also makes sense for Carmelo to fully explore his options as well. The Knicks will be over the cap next season, which means next year’s roster will look eerily similar to the year’s edition, which will finish this season at least eight games under .500. And, as result, Anthony will miss the playoffs for the first time in his NBA career.

Might it make more sense for Anthony to join a contender this summer, instead of sacrificing another year of his prime on a Knicks team that will be scratching and fighting for an eighth seed?

If both Anthony and the organization come to a mutual understanding that it’s best for both parties to part ways, agreeing to a sign-and-trade this summer could be beneficial to both the Knicks and Carmelo.

In such a scenario, Anthony could ink a much preferred five year deal (as opposed to just four seasons), which would enable him to earn far more money.

The Knicks could potentially receive a couple of draft picks, or a promising young player in exchange for Anthony, as opposed to watching him walk out the door and receive nothing in return.

For instance, if the Bulls wanted to sign Carmelo, they would likely have to amnesty Carlos Boozer to make it happen. What if the Knicks help facilitate the deal by agreeing to a sign-and-trade with Chicago, where the Knicks would take back Boozer’s contract (which expires in 2015 – so as not to clog up NY’s cap space next summer) and a draft pick or two.

While it’s hard to imagine Carmelo Anthony not in a Knicks uniform next season, a sign-and-trade may be the best possible outcome for Anthony and his hometown team.