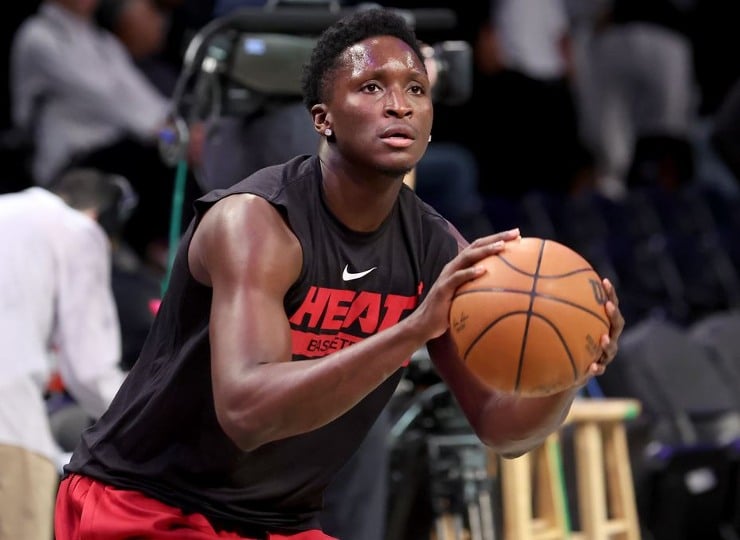 Miami Heat guard Victor Oladipo only played a combined 12 games the last two regular seasons with the team. In May 2021, the guard had season-ending surgery to repair his re-injured right quadriceps tendon.

While with the Indiana Pacers in the 2018-19 season, Oladipo suffered a ruptured quad tendon in his right knee, and this injury ruled him out for the remainder of the season.

A few NBA betting sites are giving the Heat the 11th-best odds to win the championship in 2023. After starting the season 4-5, some sportsbooks dropped their odds below the Philadelphia 76ers and Brooklyn Nets.

Now, according to Brian Windhorst of ESPN, the two-time All-Star is still not close to returning. “I don’t think he’s anywhere close, sad to say,” said Windhorst on Oladipo’s injury.

“They haven’t put a timetable on it, but I was kind of led to believe that it ain’t happening in the near future.”

When healthy, the Indiana product is a serviceable guard for a contending team. However, he has not appeared in at least 70 games since the 2017-18 season with the Pacers.

Last season, the guard played eight games at the end of the regular season and 15 games during the playoffs.

During the first round of the 2022 NBA Playoffs, the 10-year veteran recorded 23 points in Game 5 of the Heat’s 97-94 win over the Atlanta Hawks. He succeeds as either a starter or as a sixth man option.

Then, in Game 4 of the Eastern Conference Finals against the Boston Celtics, the guard finished with 23 points, 4 rebounds, and 6 assists in 30 minutes off the bench.

If Victor Oladipo is unable to stay healthy this season, the Heat might decide to trade him. In July, the guard signed a two-year, $18.2 million contract extension with the team.

Though, his new deal includes a trade restriction. He cannot be traded until January 15, 2023.