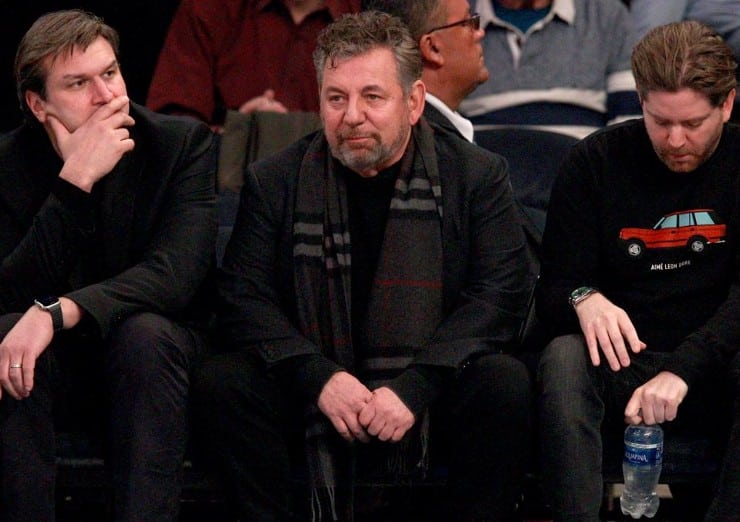 New York Knicks owner James Dolan is now denying rumors of selling the team in the upcoming future. When asked by a TMZ cameraman on whether or not he would sell the Knicks, Dolan replied, “no.”

However, the billionaire was also asked the question after Noah Tepperberg’s birthday party. Outside the office around dozens of people, no NBA team owner would ever confess a rumor to a media reporter or cameraman.

When Natalie Ravitz, the MSG senior vice president of communications and marketing, was asked the same question by The New York Post, she said, “We have no plans to sell either of the teams.”

Additionally, MSG analyst Jonathan Boyar told his side of the story to CNBC.

“The current case is right now the enterprise value is $4.7 billion,” explained Boyar. “The Knicks, uh, were just valued at $6 billion. So essentially, you’re getting paid to own the [New York] Rangers.”

“We think it’s likely that after that is done, James Dolan, who controls the company, will sell the teams”

“Their sister company, Madison Square Garden Entertainment, is currently, uh, about to finish a project in Las Vegas called the Sphere,” continued Boyar. “And we think it’s likely that after that is done, James Dolan — who controls the company — will sell the teams.” MSG Sphere will open in 2023.

“And what’s really interesting is private equity has gotten involved in a big way. It wouldn’t surprise us to put a marker on one or both of the teams, if private equity decides to take a stake.”

Will James Dolan sell the Knicks?

Aside from winning an NBA championship this 21st century, nothing would make Knicks fans happier than to see Dolan sell the team. During a timeout at a Knicks-Grizzlies game, fans were heard chanting, “sell the team.”

Per multiple reports from MSG Network, three years ago, fans were banned from attending Knicks games at Madison Square Garden for telling Dolan to his face to sell the team.

Ever since their loss to the San Antonio Spurs in the 1999 NBA Finals, the Knicks have fallen short every season. Since then, the team has had five first-round exits in the playoffs.

More importantly, the Knicks have not won an NBA championship since 1973. They defeated the Los Angeles Lakers in five games to win their second title in franchise history.

As stated once before, in one 2018 interview with ESPN’s Ian O’Connor, James Dolan released this statement to the analyst: “I can tell you that nobody in my family wants to sell the Knicks and Rangers. It’s not just my dad. It’s the whole family; my [five] brothers and sisters. They like being owners.”

He seems content right now. Knicks fans should not get their hopes up.