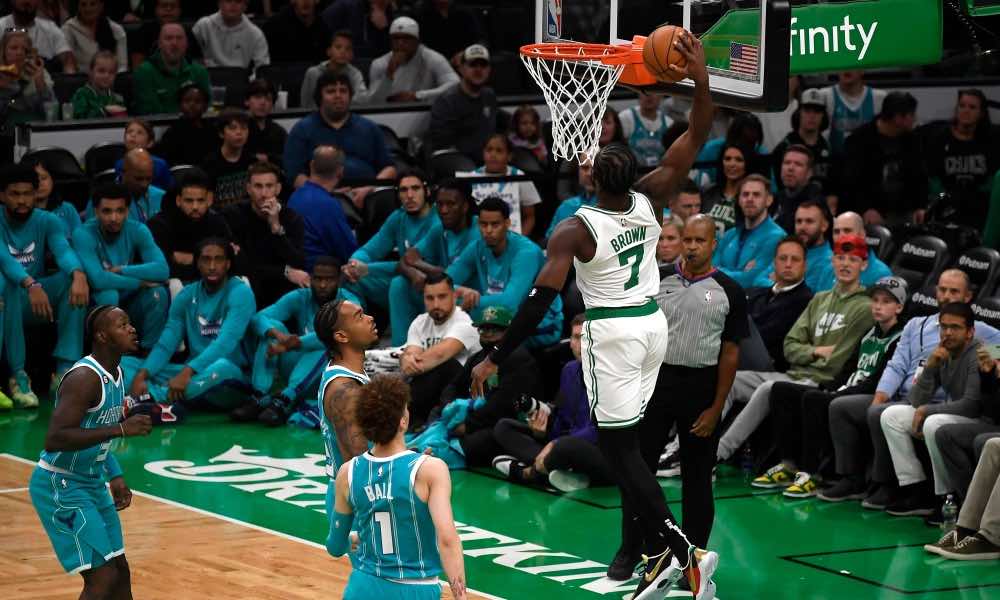 Jaylen Brown scored a game-high 24 points as the Boston Celtics cruised past the Charlotte Hornets in Joe Mazzulla’s first outing as head coach of the 17-time NBA champions.

TD Garden welcomed the reigning Eastern Conference champions back home on Sunday afternoon in Boston’s first preseason game ahead of the upcoming 2022-23 campaign and the team didn’t disappoint.

Jaylen Brown shot 8/11 from the field including 3/5 from downtown for 24 points, five rebounds, and one assist in just 23 minutes. His sidekick, Jayson Tatum, added 16 points, six rebounds, and three assists to lead the Celtics to an emphatic 134-93 win.

“He’s not a yeller; he’s not a screamer. He’s very deliberate; he’s very direct. He’s not a guy that’s going to over-talk you and tell you too much because he wants you to go out and have a clear mind. He’s going to be very direct and very honest with what he expects from you, which I think is everything an NBA player wants in a coach.”

Boston has a chip on their shoulder this year after a 4-2 defeat in the NBA Finals in June at the hands of Steph Curry’s Golden State Warriors, but a less-than-ideal offseason has raised questions over whether the team can replicate last season’s success.

All-Defensive center Robert Williams will miss 2-3 months after undergoing knee surgery which kept him out of a handful of playoff games against the Brooklyn Nets, Milwaukee Bucks, and Miami Heat.

Free agent signing Danilo Gallinari ruptured his ACL whilst playing for Italy in the FIBA World Cup qualifiers this summer and has begun rehab ahead of a possible return in the 2023 playoffs, however there is no timeframe for a return at this moment.

Boston recently added Blake Griffin on a one-year minimum deal which offers the team enhanced depth at the forward position and adds veteran leadership to a contending side.

The Celtics are sure to be a leading candidate to lift the Larry O’Brien trophy next June, but face strong opposition from the likes of the Warriors, Bucks, Los Angeles Clippers, and Phoenix Suns.