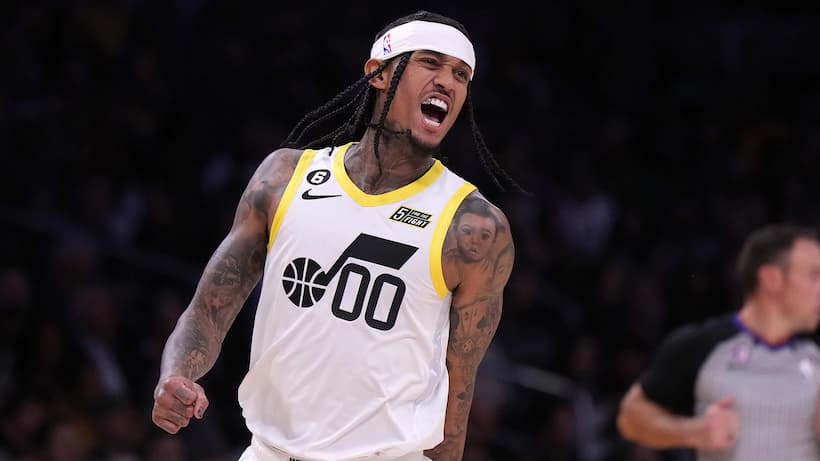 Jordan Clarkson and the Utah Jazz were the surprise of the year at the start of the NBA regular season. Since then, the team has fallen back down to earth. After spending many weeks as the first seed in the competitive Western Conference, Utah is now currently at the 10th seed. If the playoffs were to start to today, they would have to try and make it via the play-in tournament. Per BetOnline, Utah has +25,000 odds to win this year’s NBA Finals. Still, the Jazz have overcame expectations after trading away Donovan Mitchell and Rudy Gobert in the offseason. With that in mind, the organization would like to solidify their current core with how bright the future is for them. Recently, they offered a contract extension to former Sixth Man of the Year, Jordan Clarkson. Unfortunately for them, Clarkson reportedly turned it down per Marc Stein.

While Jordan Clarkson may not be having the career-year that Lauri Markannen is having, he is still a solid piece for the Jazz second unit. So far this year, he is averaging 20.5 points, 4.5 assists, and 3.9 total rebounds per game. While there is still plenty of season left to play, one should know this is a career-high scoring average as of right now. Clarkson is also shooting an effective field goal percentage of 52.8 percent. On top of this, he is also tallying a true shooting percentage of 56.4 percent, an assist percentage of 21.5 percent (his highest total in this regard since his Los Angeles Lakers days), and an offensive rating of 111. It should be noted that this offensive rating is also tied for a career-best thus far this year.

These are interesting numbers when you compare them to the season when he won the Sixth Man of the Year award. During that campaign, Clarkson averaged 18.4 points, 2.5 assists, and 4.0 total rebounds per game. He also came away with an effective field goal percentage of 52.2 percent. His true shooting percentage was 54.9 percent coupled with an assist percentage of 15.3 percent. When one looks at the numbers Jordan Clarkson is putting up this year, it is easy to see why he would want to test free agency and see where his value is at in today’s NBA.

Potential Destinations for Jordan Clarkson if He Tests Free Agency

If Jordan Clarkson does decide to forego Utah and truly test the free agency waters, there will be plenty of suitors vying for his services. In today’s offensive oriented league, no team can have too much offensive firepower. That is exactly what Jordan Clarkson is, instant offense. One potential destination is a reunion with his old squad, the Los Angeles Lakers. The Lakers are in desperate need of perimeter shooting which is something Clarkson can provide. Another team he would be a good fit for is the Dallas Mavericks. What better weapon to have when Luka Doncic needs a breather? Last, but not least would be the Philadelphia 76ers. The 76ers’ bench could use some work and Clarkson would certainly improve their chances. All in all, Jordan Clarkson turned down the contract extension for a reason and clearly knows his worth.