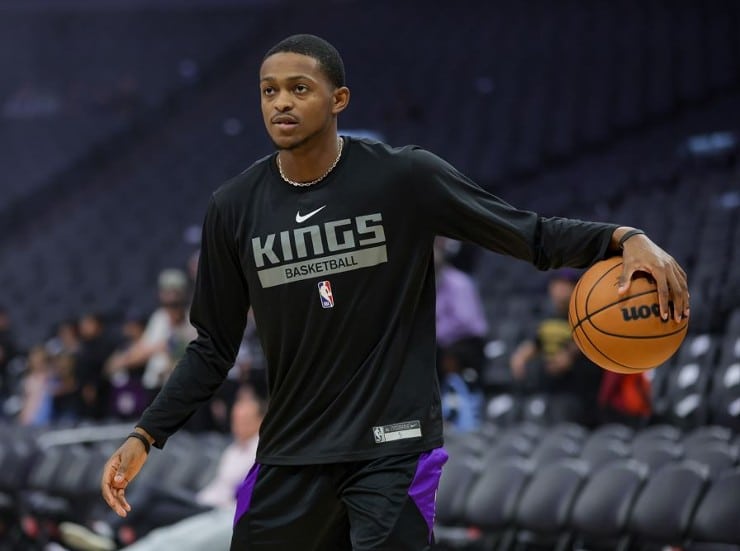 Sacramento Kings guard De’Aaron Fox has been diagnosed with a right knee bone bruise after bumping into Charlotte Hornets forward Nick Richards on Monday night. He played only nine minutes.

According to Shams Charania of The Athletic, an MRI revealed no structural knee damage for the sixth-year guard. Though, Fox will miss Wednesday night’s game against the Miami Heat. He should return soon.

A few NBA betting sites are giving the Kings the third-lowest odds to win the championship this season. Some sportsbooks dropped their odds of making the playoffs after starting the season below .500.

De’Aaron Fox underwent an MRI of the right knee which revealed a bone bruise and no other structural damage. He sustained the injury in the 2nd quarter of the Kings win at Charlotte on Monday night.

Fox is listed as OUT at Miami. Further updates will be provided as appropriate. pic.twitter.com/6P3xiJ5yXP

During the second quarter of the Kings’ 115-108 loss to Charlotte, the guard sustained the injury. Sacramento’s medical staff anticipated a knee sprain as the worst-case scenario.

Kevin Huerter scored a team-high 26 points in 36 minutes. Davion Mitchell also contributed 23 points and 4 rebounds. The Kings rallied from a 15-point halftime deficit to defeat the Hornets for their second straight win.

Without Fox around, Huerter and Mitchell were forced to carry the load. “He brings a leadership presence from the bench,” Kings coach Mike Brown said of Mitchell after the win.

“He brings an understanding of what his role is and embraces his role. He’s a guy that I know anytime we call his number he is going to be ready to play.”

In addition to De’Aaron Fox being out of Wednesday’s game in Miami with the bone bruise in his knee, Kings also list Trey Lyles as questionable for that game with right foot soreness.

Furthermore, in the 2021-22 season, Domantas Sabonis suffered a bone bruise in his left knee. Of course, Sabonis’ injury was re-evaluated after 10 days. Sacramento fans are glad that Fox’s injury isn’t more severe.

On Monday, Sabonis finished with 16 rebounds against the Hornets before fouling out with 2:24 left in the game.

To add to Fox missing tomorrow’s matchup in Miami, Kings forward Trey Lyles is listed as questionable due to right foot soreness. Lyles is averaging 6 points, 3.5 boards, 1 assist, and 1 steal this season.