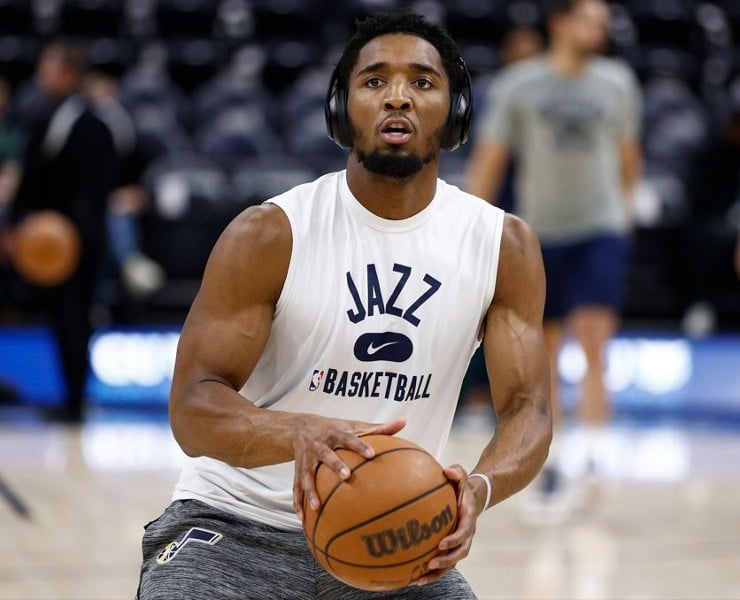 The Los Angeles Lakers are now among the teams interested in trading for Utah Jazz guard Donovan Mitchell. According to Marc Stein, Lakers G.M. Rob Pelinka still wants to bolster his team’s backcourt.

“If the Knicks manage to win the trade race for Utah’s Donovan Mitchell, or even if another team unexpectedly beats them to Mitchell, league sources say there’s a decent chance that the Lakers will be involved in the deal,” explains Stein.

“The two future first-round picks that the Lakers possess in 2027 and 2029 are the kind of top-shelf draft picks that Jazz CEO Danny Ainge is believed to covet.”

“Russell Westbrook’s $47 million expiring contract and those picks could be the Lakers’ entree to a potential three-team swap… depending on the players that would land in Los Angeles.”

A three-team trade involving the New York Knicks is a possibility. If the Lakers can land Jazz forward Bojan Bogdanovic and the Knicks guard Evan Fournier, their future will be set.

Would Lakers trade Russell Westbrook to Jazz for Donovan Mitchell?

This is a low-risk, high-reward trade. Both Westbrook and Mitchell are solid options. Mitchell sustained an ankle injury during the 2021 NBA Playoffs. Having said that, he’s been healthy throughout most of his five-year career.

Last week, the Lakers traded Talen Horton-Tucker and Stanley Johnson to the Jazz for Patrick Beverley. Would the front office really make another trade with Jazz executive Danny Ainge?

After missing the playoffs last season, they don’t have much to lose. Though, expectations are always high with LeBron James.

Around-the-league NBA notes on a Sunday with all the latest buzz … as it should be: https://t.co/RMiizOAnFM

With Beverley and new head coach Darvin Ham, the Lakers are already in better shape now than they were at the end of the 2021-22 season. But one more addition to the roster wouldn’t hurt.

Imagine Anthony Davis, James, Beverley and Mitchell together on the same team. For Lakers fans, it sounds too good to be true.

Not to mention, Ainge’s asking price for Mitchell is high. The Lakers would have to surrender multiple first-round draft picks and Westbrook for this deal to happen. Plus, the two-time scoring champ is entering his 15th season.

Westbrook exercised his $47,063,478 player option with the team in late June. While the triple-double king had a down year offensively with the Lakers last season, he could have a bounce-back season under Ham.

However, if one had to decide between the two, Mitchell is better than Westbrook right now. Last season, in 67 starts with the Jazz, the three-time All-Star averaged 25.9 points, 4.2 rebounds, 5.3 assists and 1.5 steals per game.

During the first round of the 2022 NBA Playoffs, Mitchell recorded 32 points in the Jazz’s 99-93 road win over the Dallas Mavericks in Game 1.

Furthermore, Mitchell is eight years younger than Westbrook. For any general manager, it’s a no-brainer. Having a younger star can be the difference-maker between losing in the first round of the playoffs and advancing to the NBA Finals.

More trade rumors on Donovan Mitchell and the Lakers are on the main page.