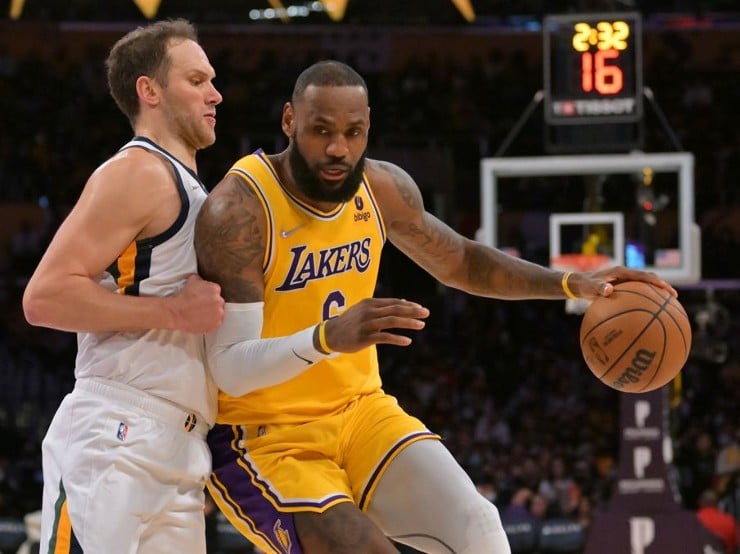 The Los Angeles Lakers are targeting Bojan Bogdanovic, Jordan Clarkson, and Malik Beasley from the Utah Jazz. Now, according to Jovan Buha and Sam Amick of The Athletic, the Lakers remain interested in these said players.

In their story, Buha and Amick mentioned, “One preliminary iteration of a four-team deal would have had Bojan Bogdanović and Terry Rozier going back to Los Angeles.”

In recent conversations with the Jazz, the Lakers have targeted Bojan Bogdanovic, Jordan Clarkson and Malik Beasley, sources tell @sam_amick and @jovanbuha.

But a trade remains unlikely, and it has everything to do with the future.https://t.co/Mbk8k22NgY pic.twitter.com/et1ziAGHsj

Additionally, the Lakers are aiming to improve their perimeter shooting. Therefore, another trade could be in the works for at least one other player.

“The Lakers’ desire to land the Pacers’ Buddy Hield has also been well-chronicled, with the former Kings guard nearly coming their way via trade last summer,” posted Buha and Amick.

“The 29-year-old 3-point specialist has been a focal point in the Lakers’ offseason talks with Indiana as well — alongside Myles Turner — but a deal is not expected on that front.”

Though, is a deal expected on any front in the near future? After the front office hired Darvin Ham as the 28th head coach in Lakers franchise history, the former assistant coach promised a culture change within the organization. For the bottom line, he wants to win.

Last month, the Lakers traded Talen Horton-Tucker and Stanley Johnson to the Jazz for Patrick Beverley. While with the Minnesota Timberwolves last season, Beverley averaged 9.2 points, 4.1 rebounds, 4.6 assists, and 1.2 steals per game.

It was the first time Beverley averaged nearly double-digit points since his 2017-18 season with the Los Angeles Clippers. Even with a solid defender in Beverley, the Lakers want to improve their 3-point accuracy. The 10-year veteran shot 34.3% from downtown with Minnesota. It’s nothing to celebrate.

Out of the three targeted Jazz players, the Lakers could make it work with Malik Beasley. In the 2021-22 season, the sixth-year shooting guard averaged 12.1 points, 2.9 rebounds, 1.5 assists per game with the Timberwolves. More importantly, Beasley shot 37.7% from beyond the arc.

If Pelinka can trade for Bogdanović, Clarkson, and Beasley, then kudos to the Lakers executive. It’s wise for a general manager not to put all his eggs in one basket. LeBron James and Anthony Davis are injury-prone players at this point of their playing careers.

For a team to succeed, it’s best to throw enough at the wall and hope that something will eventually stick. In the coming years, will fans wonder how great the Lakers could have been with another reliable superstar?

If the Westbrook experiment fails, that’ll be the case. During this offseason, the team could have traded for Kyrie Irving and/or Kevin Durant. Perhaps it’s not too late. An in-season trade is also possible.