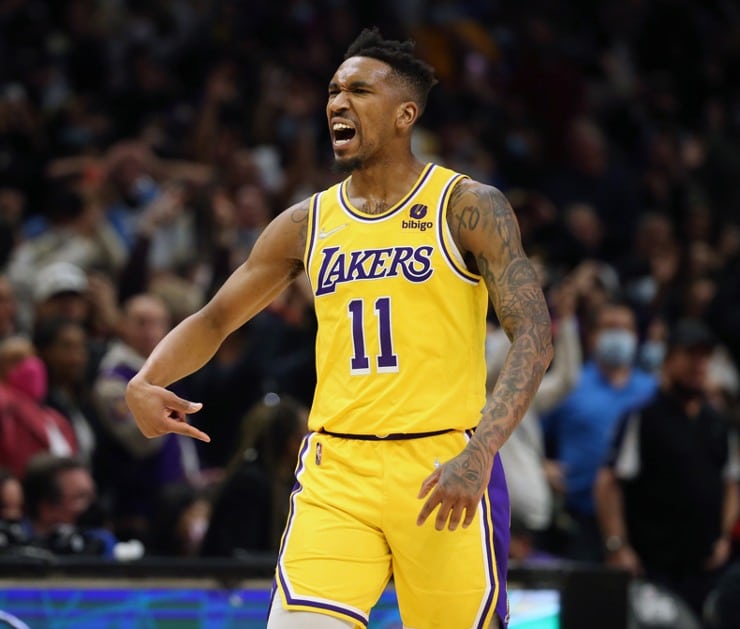 Malik Monk commented on the Lakers’ big three: LeBron James, Anthony Davis and Russell Westbrook. When asked about whether or not the team is capable of winning a championship with its current players, Monk replied, “They grown men. Especially when they have convos like that, it’ll work out for them. They all great.”

The fifth-year guard signed a two-year, $19 million contract with the Kings last week. In the 2021-22 NBA season, the Lakers finished 33-49 (.402) and ranked 11th overall in the Western Conference. After losing 121-110 to the Suns on Apr. 5, the team was officially eliminated from play-in contention.

Malik Monk believes LeBron James is the key to winning

As long as the Lakers have LeBron James, they will remain competitive. At least that’s what Monk believes. “LeBron had a big part of everything,” explained the guard. “He had a big part in me coming to L.A. It’s Bron, bro. He gon’ try to help every teammate he comes in contact with.”

“So, I have nothing bad to say about him. You got to play at a level he plays at. If not, you going to get surpassed. That’s why he’s so great.”

While the general manager side of LeBron has held back the Lakers, the player is still dominating the league. Last season, the four-time MVP averaged 30.3 points, 8.2 rebounds, 6.2 assists, 1.3 steals and 1.1 blocks per game. He averaged 52.4% from the field and 35.9% from 3-point range.

In addition to missing time due to an ankle injury in the 2021-22 season, James was also forced to sit out multiple games due to an abdominal strain, left knee swelling, a league suspension and for a positive COVID-19 test. The 18-time All-Star played 56 games.

Anthony Davis has to stay healthy in the 2022-23 season

Davis played 40 games last season. He averaged 23.2 points, 9.9 rebounds, 3.1 assists, 1.2 steals and 2.3 blocks per game. In mid-February, the forward/center went on to miss multiple weeks after sustaining a mid-foot sprain.

The 10-year NBA veteran has dealt with numerous injuries over the course of his playing career. While on the Pelicans in his rookie 2012-13 season, Davis suffered a season-ending left knee medial collateral ligament sprain injury.

On Mar. 20, 2016, the forward/center was ruled out for the remainder of the season with a left knee injury and a torn labrum in his shoulder. The eight-time All-Star has also struggled to overcome ankle and groin injuries throughout the course of his playing career.

During the first round of the 2021 NBA Playoffs, Davis suffered a left groin strain in Game 4 against the Suns. Of course, the Lakers lost the series in six games. If he can stay healthy next season, the Lakers should at least qualify for the playoffs under new coach Davin Ham. More news articles related to Malik Monk or the Lakers are on main page.