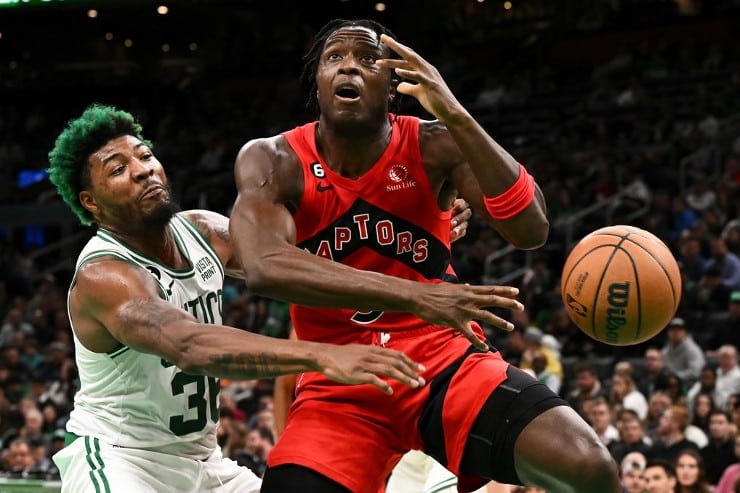 Marcus Smart is impressed by the Celtics’ 3-1 start to begin the 2022-23 season, but the Defensive Player of the Year wants the C’s to play better defense.

On Friday, following a shootaround with the team, Smart spoke with reporters. “We have to start defending like we used to,” said Smart.

Based on a few NBA betting sites, the Celtics are the favorites to win the championship in 2023. However, some sportsbooks are showing higher odds for the Golden State Warriors and Los Angeles Clippers.

Marcus Smart says we have to “start defending like we used to.”

“We've got all the tools. We know what it takes. We know the mindset we have to have. We’ve just gotta go do it.”

“We’ve got all the tools, and we know what it takes,” continued Marcus Smart. “We know the mindset we have to have. We’ve just gotta go do it.”

Through four games this season, the Celtics are surrendering 115.3 points per game, ranking 19th overall in the NBA. With a rating of 1.147, Boston also ranks 27th in defensive efficiency.

Last season, the C’s led the league in opponent points per game, allowing 103.9 points. Plus, they ranked No. 1 in defensive efficiency (1.036). For good news, there is still a lot of basketball left to be played.

Tonight at 7:30 p.m. ET, the Celtics play the Cleveland Cavaliers at TD Garden. This matchup can be watched live on NBC Sports Boston. Marcus Smart hopes to see better defense from his teammates.

The top-3 offense is facing off against the top-3 defense.

Of course, Boston will be without Grant Williams. The forward is serving his one-game suspension tonight for “recklessly making contact with and directing inappropriate language toward a game official” during Monday’s loss to the Chicago Bulls.

According to ESPN NBA Insider Bobby Marks, Williams’ suspension is costing the forward $29,698. And the Celtics are receiving a tax variance credit of $14,849.

In the Celtics’ 120-102 loss against the Bulls, the C’s led 35-16 with 3:30 left in the opening quarter after Marcus Smart sank a 3-pointer. Though, Boston slacked off defensively.

Prior to halftime, the Bulls led 65-51 before Smart banked in a 3-pointer at the buzzer. Overall, Smart feels the Celtics should be 4-0 right now.

While off-the-mark performances usually fall on players, the team’s defensive issue can be corrected by interim head coach Joe Mazzulla. The Eastern Conference contender is more than capable of winning a championship this season.