Russell Adjusting to Life With Lakers

A number of NBA players have told me that there’s nothing quite like being a member of the Los Angeles Lakers. While every NBA player receives a certain amount of attention regardless of which team they’re on, being on the Lakers is different from playing for just about any other franchise in the NBA.

During Ramon Sessions’ his lone season as the starting point guard of the Lakers, he says he was chased through a hotel hallway by a horde of fans trying to get his autograph and take pictures with him.

Vander Blue, who appeared in just two games for Los Angeles last season, told me he went from being a relatively unknown player to being stopped by TMZ’s paparazzi just because he was on the Lakers. 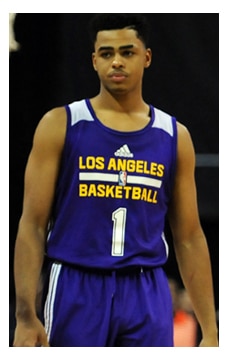 If lesser known players like Sessions and Blue experienced those things during their time donning a purple and gold jersey, just imagine what it’s like to be a star for the Lakers.

For D’Angelo Russell, the No. 2 overall pick in the 2015 NBA Draft, his life changed overnight when L.A. selected him on June 25. He’s now a cornerstone for the Lakers and fans hope he can become the team’s next star, guiding the franchise in the post-Kobe-Bryant era. That’s a lot to ask of a 19-year-old who would be entering his sophomore year of college had he not entered the NBA.

Russell is doing his best to adapt to the NBA lifestyle and deal with the pressure that comes with being a top pick (and a Laker). Rather than worry about all of the high expectations and intense scrutiny that comes with being in his position, he’s embracing all of the positives that his new-found fame have yielded. For example, he has received a ton of exposure and new fans since being drafted.

“I feel the love from fans already,” Russell told Basketball Insiders through his agency, CAA. “My fan base has grown enormously, starting with draft night. My social media following [which is now over 211,300 Twitter followers] has gone up a lot since being drafted by the Lakers.”

In addition to growing his fan base, playing for the Lakers has allowed him to ink a number of endorsement deals. Recently, he signed a deal with Nike, which was a dream come true for him.

“I am so happy to have the opportunity to work with Nike,” Russell said. “Their technology and products are the best in the game. I always wanted to be part of the Nike family and I am honored to represent them on the court.”

In addition to the Nike endorsement, he has agreed to a deal with the monthly subscription service Birchbox.

“[I teamed up with Birchbox] because I love fragrances and picking a scent for my mood; I always need to smell fresh!” Russell said. “Birchbox gives guys the opportunity to change up their routine and try new products all the time. They offer brands I don’t normally get to see while shopping.”

Becoming a household name, landing lucrative endorsements and getting to throw out the first pitch at a Dodgers game are just some of the perks that come with being a Laker and playing on one of the biggest stages in basketball.

Fortunately, Russell doesn’t lack confidence (to say the least), so performing on that big stage shouldn’t be a problem for him. While some rookies might doubt themselves or buckle under the extreme pressure, Russell is so confident that he isn’t afraid to predict he’ll have a monster 2015-16 season.

For example, when asked if winning Rookie of the Year is among his goals this upcoming season, Russell responds as if the answer is obvious.

“Of course,” Russell said. “I have been grinding all summer to put myself in that position.”

As far as team goals go, Russell essentially guaranteed L.A. will make the postseason next year.

“Expectations are high,” Russell says, “but this Lakers squad will most definitely be a playoff team.”

Lakers fans will love these quotes and there’s nothing wrong with being extremely confident. While many NBA fans will scoff at Russell’s predictions, keep in mind that he’s used to outperforming expectations.

Last year, he entered Ohio State as a five-star recruit, but he wasn’t being talked about as a top 2015 draft prospect. While other players like Karl-Anthony Towns, Jahlil Okafor and Emmanuel Mudiay had been projected as top picks for years and seemed like obvious one-and-done candidates, Russell wasn’t getting that kind of buzz initially.

That is, until he turned in a dominant season for the Buckeyes and emerged as the best guard in the country. He averaged 19.3 points, 5.7 rebounds, 5.0 assists and 1.6 steals throughout the season. Russell led Ohio State to the round of 32 in the NCAA Tournament, beating the higher ranked VCU Rams in overtime with a 28-point, six-rebound, two-steal, two-block performance (like I said, he thrives on the biggest stages).

He was one of the most exciting players to watch throughout the college basketball season and it was easy to forget that he was just a freshman with how productive he was during the year.

Now, he’s hoping to duplicate that success in the NBA and propel the Lakers up the Western Conference standings after they finished last season with a 21-61 record (the second-worst mark in the conference).

While it seems unlikely that the Lakers will be able to crack the top eight in the brutal West, it’s good to see that Russell has confidence in himself and his teammates and that he is entering this season feeling optimistic. The offseason is the time when every team is still undefeated so everyone – from players to fans – can feel like their team has a legitimate chance to be successful.

At this point, Russell is tired of talking about the upcoming season and just can’t wait for the campaign to start. He’s thrilled to make his NBA debut and he’s counting down the days until training camp begins.

“I’m excited to play everyone,” Russell said. “Really, I just can’t wait to get on the court.”

And fans in L.A. are just as excited to see what he does when he steps onto the Staples Center floor.

On Tuesday, the latest episode of the Basketball Insiders Podcast was posted. This installment featured NBA TV’s Kristen Ledlow and I discussing a wide range of topics including her career and predictions for the upcoming NBA season.

Kristen also answered various questions submitted by listeners, discussing what it was like to play in two Celebrity All-Star Games, her experience going to high school with T-Pain’s rap group, how she developed her close friendship with LeBron James and much more. Listen here:

To listen to older episodes of the podcast, subscribe on iTunes or go to our SoundCloud page.