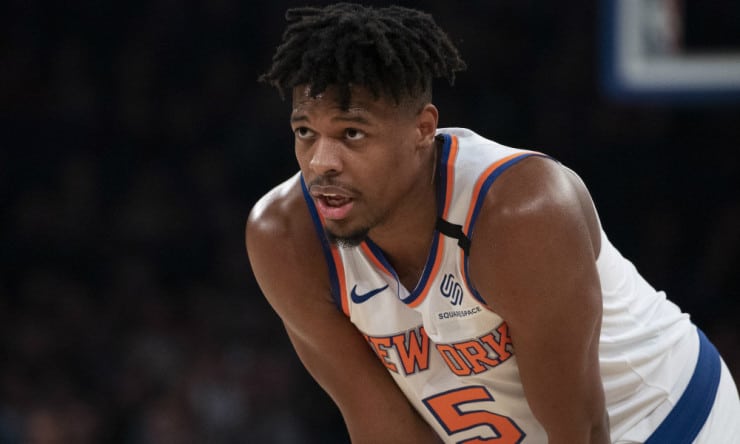 Dennis Smith Jr. sits at his locker, checking his phone and listening to music before most games. He’s available to the press in the locker room more than most Knicks, but he’s looked increasingly forlorn. It wasn’t supposed to go like this.

“I’m thinking exactly what you’re thinking,” Smith Jr. told Basketball Insiders. “I had a good rookie year. Sophomore year was solid, too. I played well when I got here last year. Now to have things going the way they are…You just can’t dwell on it – positive or negative. You can’t change it. All I can do is focus on the right now.”

Smith Jr. is presently a reserve guard for the New York Knicks, but it wasn’t long ago that he was the Dallas Mavericks’ point guard of the future.

He was drafted by the Mavericks with the ninth overall pick in 2017 after demonstrating elite athleticism and leaping ability at NC State. There was a lot of speculation that the Knicks would draft their point guard of the future, and Smith Jr. looked like the obvious pick. But the team ultimately decided on Frank Ntilikina over Smith Jr. Considering the franchise’s draft mishaps, Smith Jr. was unsurprisingly playing well, whereas Ntilikina struggled. Adding insult to injury, LeBron James and others piled on by publicly supporting Smith Jr.

“The Knicks passed on a really good one, and Dallas got the diamond in the rough,” LeBron James said after a game against Dallas in November 2017. “He should be a Knick. That’s going to make some headlines, but he should be a Knick. Dallas is definitely, I know they’re excited that he didn’t go there.”

Smith Jr. had a successful rookie season, averaging 15.2 points and 5.2 assists per game. As expected, he had some jaw-dropping highlights, but struggled shooting the ball – posting a field goal percentage of 39.5 percent. Still, the future looked bright.

But things quickly became complicated. The Mavericks executed a draft-day trade in 2018, which enabled them to select Luka Doncic. Doncic had been (and continues to be) otherworldly as the Mavericks’ lead guard since his very first game. So just like that, Smith Jr. was expendable.

Fast forward to Feb. 1, 2019 – Smith Jr. was dealt to New York along with Wesley Matthews, DeAndre Jordan and two future first-round draft picks in exchange for Kristaps Porzingis, Courtney Lee, Trey Burke and Tim Hardaway Jr.  And serendipitously, the Knicks got their guy.

Smith Jr. continued his fairly strong play in New York for the remainder of last season. In 21 games with the Knicks, he averaged 14.7 points and 5.4 assists in 28.6 minutes per game after seeing dips in points (12.9) and assists (4.3) with Dallas. The key takeaway for the Knicks pertaining to Smith Jr. was that he showed promise. Still, there was enough doubt that the Knicks signed free agent point guard Elfrid Payton.

Then-head coach David Fizdale spoke highly of Smith Jr.’s performances in training camp, but the third-year guard’s back injury flared up, causing him to miss seven consecutive games after struggling in the first three games of the season.

But Smith Jr.’s role remained unclear after he returned. On the whole, 2019-20 has been tough on him. He is posting only 5.5 points and 3 assists per game, and he’s shooting only 34 percent from the field and 29.6 percent on three-pointers. But most alarmingly, he’s really struggled to secure playing time.

While it’s logical to assume he’s suffering from residual setbacks related to his preseason back injury, Smith Jr. is quick to distance himself from that excuse.

“There’s no physical limitations on me,” Smith Jr. told Basketball Insiders. “I’ve been practicing, haven’t missed any practices. My wind is good, too. Last time we played the Pacers, I played big minutes. So I’m definitely good.”

While he may be healthy, it’s hard for anyone to develop a rhythm when minutes are limited.

“It’s been tough on me for a while,” Smith Jr. explained. “I’m just looking for an opportunity. Even if my minutes are limited, I can’t worry about going out there and worry about trying to play perfect. It’s hard to do, especially when your time is cut. It’s something I gotta get better at. It’s just another challenge.

“But I’ve had a lot of challenges in my life, whether it’s basketball or not. And I ain’t never quit at nothing. I’m gonna keep pushing. Like I always say, my faith in myself is always high.”

It might seem as if Smith Jr. is surprisingly upbeat considering the uncertainty surrounding his role, but he’s been blessed with a new perspective and approach.

“I’m still only 22 – but I understand how important the mental part of the game is,” Smith Jr. told Basketball Insiders. “And I’ve been working at that, at staying positive and waiting for my chance.”

Chances have been few and far between for Smith Jr. this season. But fortuitously, an opportunity recently presented itself when Ntilikina aggravated a groin injury that’s resulted in him missing the last four games. Ideally, Smith Jr. and Ntilikina should play alongside one another; Smith Jr. will take any playing time however he gets it.

Prior to Thursday night, when Smith Jr. suffered a concussion and did not return to the game, he appeared more comfortable in the last few games. He led the Knicks in assists (6) last Friday against Indiana, scored 15 points in a loss to Houston on Monday and posted a huge highlight dunk on Wednesday again Charlotte.

“I know I’m fully capable,” Smith Jr. said. “The NBA is a lot about opportunity. We all know I’m more than capable.”

While Smith Jr. remains positive about capitalizing on opportunities, he was clearly less enthusiastic about discussing the reasons behind why he may not be playing. It could be indicative of a rift between Smith Jr. and Miller. It could be that he understands that Miller might not return as coach next season. Or it could mean that he’s simply focused on improving and tuning out all of the background noise.

“The rotation is the rotation and that’s out of my control,” Smith Jr. said.

“I just have to focus on the things I can control,” Smith explained. “Maintain my work ethic, my physical, my mental – definitely my mental. Understanding the differences in my actual life, dealing with ups and downs. Take my lumps like a champ and keep moving.”

So while Smith Jr. has struggled to carve out a role in the league this season, lots of accomplished people close to the game believe in him. James’ quote from 2017 is the highest profile example, but there’s numerous others. Elfrid Payton was a 2014 lottery pick himself and played alongside another uber-athletic point guard for nearly four seasons in Victor Oladipo. And Payton’s still impressed with what he’s seen from Smith Jr.

Doug McDermott, his former Dallas teammate and current Indiana swingman, also spoke highly of Smith Jr. and his abilities after the Knicks-Pacers game on Friday. He sympathizes with Smith Jr. sadly losing his stepmother last October. He was inactive for the seven games before returning to action.

“We all loved Dennis. He’s a hell of a player,” McDermott told Basketball Insiders. “He’s gone through a lot this year on and off of the floor, and with some family stuff. I’m not super close with him, but it must be weighing on him. He’s got a lot of talent. People have to stay patient with him. It’s a tough market to play in (New York), especially when you’re struggling. I went through it in Chicago. But I know he’ll have a long career. I believe in him. He’s too talented not to be in this league.”

Smith Jr. approaches the game differently these days, but as he indicated, he’ll never quit. Yes, the road has been windier than expected, but the destination remains.

It might not be on everyone’s preferred timeline, but the flying 22-year-old point guard will make his mark on the NBA.