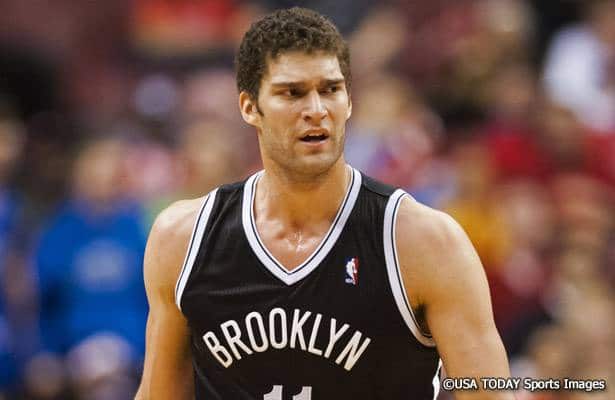 There are several factors behind the Nets’ resurgence, starting of course with their play of the defensive end. After their early season struggles, everyone appears to be much more willing to buy into the role that Kidd has for them, and the team, outside of Brook Lopez, has started to get healthier.

Lopez was playing the best basketball of any Net before going down with a season-ending foot injury on December 20. He was putting up 20.7 points a game along with six rebounds and nearly two blocks. His play was so strong that the Nets were still rejecting trade offers for him after even his severe injury.

However, with how well the team has been playing without him, Lopez’s stock may have actually dropped a bit in the eyes of the Nets.

As Zach Lowe of Grantland revealed in his new piece that is a must-read, Lopez doesn’t necessarily fit in with this style of play that the Nets have adopted in his absence.

“We’ve found our personality,” Nets GM Billy King told Lowe. “Brook is a great scorer, but now, when we’re smaller, defensively we are a little better.”

“You have to have a sense of structure and identity,” Kidd added. “You have to know who you are and how you’re going to play both ends. And now we do.

“I don’t think the team with Brook is built to be a hybrid like this. Now we are, because we have no choice. We have a structure, and Brook going out has helped us define that.”

It’s rare for executives to tip their hand or admit that they would trade one of their best players, but King came right out and did so.

“We are not shopping Brook Lopez,” King said. “Our goal is to get Brook as healthy as possible. But if deals present themselves, we’ve got to look at them. If we can get draft picks back at some point, that would help.”

Lopez could be a free agent at the end of next season, in which he is scheduled to earn $15.7 million, if he declines his 2015-16 player option that is worth $16.7 million. His contract pays him $14.6 million this season; while it’s a hefty deal, it’s only a bad deal if he can’t get healthy. When at full strength, he’s the league’s premier center offensively and someone you can run your halfcourt offense through, something you can do with few five men in the league today.

Whereas the Nets were in win-now mode this offseason willing to sacrifice all future assets in order to be more competitive this season, they now are likely to have the opposite approach. They’re going to want some youth, draft picks and cap relief to come their way as they look to ease what is going to be a massive tax bill for a team unlikely to get out of the first round, let alone the second round, no matter what they do.

Truth be told, there really isn’t an untouchable piece on the Nets roster. There’s not a fire sale going on, but in a market where star players are difficult to acquire, Lopez, Deron Williams, Paul Pierce and Joe Johnson could likely be obtained for less than their true value because the Nets are clearly sellers with the NBA’s February 20 trade deadline fast approaching.

Gasol’s Return Delayed, Suns Deal In Jeopardy: According to ESPN, who was first to report that the Phoenix Suns and Los Angeles Lakers were discussing a deal centered around swapping Emeka Okafor for Pau Gasol, the Suns wanted to make sure that his current injury is only of the minor variety before further advancing talks.

We’re going to find out how big of a sticking point that really is because since then news has broke that Gasol is going to at least be out for two more weeks, which will keep him out past the All-Star break and until right up to the trade deadline. If he gets to play before the deadline it will be a game, maybe two.

As far as risk is concerned, the Suns really have nothing to lose by this deal except for some of owner Robert Sarvar’s money – and who cares about that besides him? Even if Gasol doesn’t contribute at all, it’s not like they were going to get anything from Okafor, who is expected to miss the entire season with a neck injury. With him though comes the potential reward of adding in a two-time champion big man who is as skilled as he is unselfish, making it easy to assume he could assimilate himself into what is already a very good Suns team without him. All the talk is that they’re looking for a piece that can help solidify their spot in the playoffs and make them a factor in the postseason, none fits the billing more than Gasol.

Even with the news of the latest Gasol setback, this deal just appears to make too much sense not to happen. It could get dragged on until closer to the deadline as the two team’s haggle over whether other players or draft picks are included in the deal. Remember, the Lakers are trying to acquire draft picks and get under the luxury tax. An Okafor-Gasol swap gets them about $3 million shy of the right side of the tax threshold. If they can expand the deal to get them underneath the line without another move, that’s the right way to go. You only get to trade away a future Hall of Famer and champion like Pau Gasol once, officially at least, and the Lakers should do what they can to answer as many needs as possible if they do so.

Sanders Not Available: This offseason the Milwaukee Bucks rewarded Larry Sanders with a four-year, $44 million contract extension, despite the fact that they had the entire offseason to evaluate and the ability to make him a restricted free agent, where they could have let the market dictate the price. Sanders made serious strides last season, though, and they felt comfortable making him the face of their franchise.

The extension doesn’t even kick in until next season, but the contract is already in question as Sanders missed a large portion of the season due to an injury suffered in a fight at a nightclub, and has not played at a high level since his return.

However, according to Eddie Sefko of the Dallas Morning News, the Bucks are maintaining faith in their decision, not trying to run away from it by trading Sanders now. Even as they get set to give him a sizable raise, they’re banking on him getting back on track rather than trying to move him while his value is at its lowest.

The Bucks are on pace to have the best odds at winning the 2014 NBA Draft, where the top prize is expected to be Kansas center Joel Embiid. If the Bucks end up adding Embiid, Sanders’ days could be numbered, but until then they appear to be committed to him.