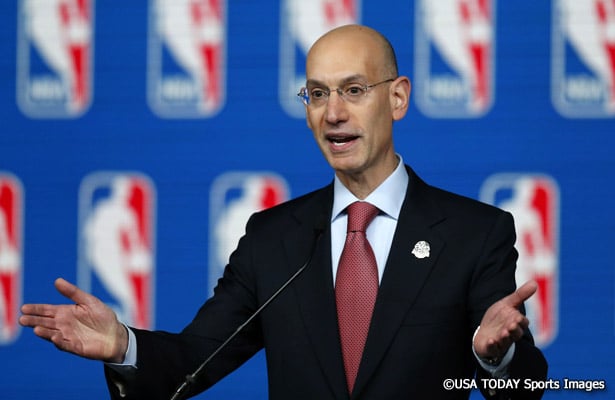 Get ready to see sponsors’ logos on NBA jerseys. They’re most likely coming in the next five years, commissioner Adam Silver told an audience at the IMG World Congress of Sports on Wednesday.

“It just creates that much more of an opportunity for our marketing partners to get that much closer to our fans and to our players,” Silver said at the conference, put on by the Sports Business Daily/Journal. “It gives us an opportunity just to have deeper integration when it comes to those forms of sponsorship.”

In 2011, as deputy commissioner, it was Silver who said putting logos on jerseys would be worth about $100 million a year to the league. But Silver told ESPN.com last month that the discussion over the logo patches on jerseys had slowed in recent years because it was unclear how advertising on jerseys might compromise the advertising being sold by the league’s national television partners, Turner and ESPN.

via Darren Rovell of ESPN

Silver said that it is “inevitable” that sponsors’ logos will be added to NBA jerseys, so don’t be surprised when your favorite team has a patch added to their uniform in the next few years.

According to Rovell, the NBA is planning to implement “a single patch for each team” that “would be 2½ inches by 2½ inches.”

The WNBA already allows sponsors’ logos on the jerseys (in fact, many of the ads are actually bigger than the team logos).

This is a way for the NBA to make a lot of money without having to give up much. Some fans may get upset initially, but everyone will quickly forget that the logos are there. It won’t impact the game; it’ll just make some advertiser happy when he’s watching on television and briefly sees the logo.

“We know what the value is to advertisers in a world of 1,000-plus channels to be able to show fans in-game branding,” Silver said, according to Rovell.

Fred Hoiberg’s future as an NBA coach rests with him — and him only — says a former NBA player and executive.

“I’ve talked to a lot of people in the NBA. The minute he says he’s interested, he’ll have some offers,” said Steve Kerr, part of the television crew calling this weekend’s NCAA Tournament for TNT.

Hoiberg has acknowledged that he had head coaching inquiries from NBA franchises that he would not identify. He said he hasn’t let it extend beyond the inquiry stage.

“Nothing got to the point where there was an offer,” Hoiberg, 41, said when his contract was re-worked last summer.

via Randy Peterson of the Des Moines Register

Hoiberg has done an excellent job in his four seasons as head coach of Iowa State, leading the team to an 88-46 record during that span.

The 41-year-old played 10 seasons in the NBA before getting into coaching. He worked with the Minnesota Timberwolves’ front office prior to getting the job at Iowa State.

Last April, Hoiberg restructured his contract with the Cyclones, signing a 10-year extension worth $20 million. The deal would keep him in Ames through 2023. The deal is actually structured so that leaving for the NBA is easier than leaving to accept another NCAA position.

If Hoiberg accepts a head coaching or general manager position in the NBA, his contract buyout is $500,000 whereas it is $2 million if he leaves to take another Division I head coaching position.

Hoiberg seems happy at Iowa State, but the NBA presents an intriguing challenge for coaches (especially one who spent a decade in the league). NBA teams have already started calling and that will likely continue in the years to come. It’ll be interesting to see what Hoiberg decides to do.

Free agent guard/forward Mickael Pietrus has opted to sit out the remainder of the 2013-14-basketball season to focus on returning to the NBA next year, his agent Bill McCandless informed CSNNW.com.

Pietrus, 32, had multiple overseas offers on the table; however, the swingman declined those preludes in hopes that a NBA team would pick him up.

via Chris Haynes of CSNNW.com

Pietrus last played with the Toronto Raptors in the 2012-13 season, when he averaged 5.3 points in 20.3 minutes per game. He started 16 of 19 games with the Raptors down the stretch, but hasn’t been able to find a new team since.

Over the course of Pietrus’ 10-year career, he has averaged 8.3 points and 3.1 rebounds. Pietrus has also had stints with the Golden State Warriors, Orlando Magic, Phoenix Suns and Boston Celtics.

Pietrus, like many veterans, decided to turn down overseas offers in an attempt to resume his NBA career. Other notable free agents who haven’t been able to ink a new contract this season include Richard Hamilton, DeShawn Stevenson, Josh Howard, Corey Maggette, Stephen Jackson, Dahntay Jones, Chris Duhon, Tyrus Thomas and Kwame Brown among others.