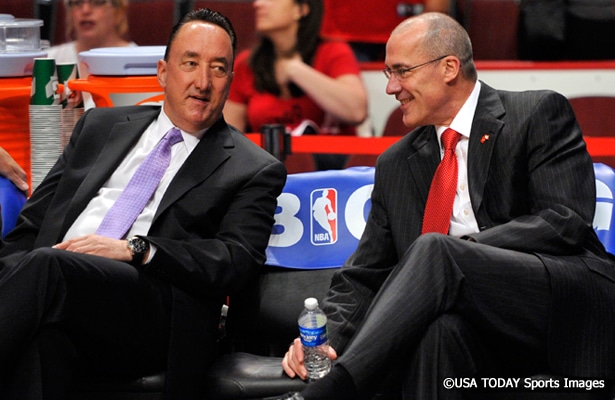 Bulls management remained quiet on the possibility of signing Ronnie Brewer and/or Mike James, but sources said the team will beef up its roster next week. After waiving rookie forward Erik Murphy, it’s even possible the Bulls will add three prorated veteran minimum contracts to bring the roster to 15. James is a virtual certainty to return. Signing Brewer also is being considered as a way to reduce the workload of Jimmy Butler, whose 41.9 minutes per game in March was the NBA’s most.

via Teddy Greenstein of the Chicago Tribune

The Chicago Bulls have played well recently, even after trading away Luol Deng earlier this season. But in doing so, the team has heavily relied on D.J. Augustin and Jimmy Butler.

It makes sense that Mike James and Ronnie Brewer are on the team’s radar considering that the playoffs are right around the corner. Both are veteran players who have previously played for Tom Thibodeau in Chicago and are familiar with his offensive and defensive systems.

Brewer has struggled to find a home after spending two seasons in Chicago, drifting from the New York Knicks to the Oklahoma City Thunder to the Houston Rockets earlier this season. Brewer is a gritty defender and at 29 years old can still contribute. His jump shot has never been consistent, but Brewer could still fill in spot minutes behind Butler.

James seems to always be ready to fill in as needed for teams in search of veteran help at the point guard position. James played for the Bulls earlier this season, but was waived after just seven games. In January, he signed a 10-day contract to return to the Bulls, but was not offered a second 10-day contract. Now it seems the Bulls are again looking to James as insurance at the point guard position to back up Augustin and Kirk Hinrich. James can still shoot, hitting on 38.4 percent of his shots from beyond the arc in 45 games with the Dallas Mavericks in the 2012-13 season.

For a second time, Phil Jackson met with a former Laker at halftime during a game as Knicks president. This time, it was a sit-down with Lamar Odom during Wednesday’s Knicks-Nets game. The troubled Odom, 34, is sitting out this season after being arrested over the summer on a DUI charge and spending some time in drug and alcohol rehabilitation. He played last season with the Clippers and met with them in November but never signed. He played five seasons for Jackson with the Lakers, winning two titles. The Queens product also was the NBA’s Sixth Man of the Year in 2011.

Odom played with the Los Angeles Clippers last season, averaging 4.0 points, 1.7 assists and 5.9 rebounds in 19.7 minutes per game. Odom mainly produced on the defensive side of the ball, but struggled with conditioning throughout the season, limiting his offensive effectiveness.

This last offseason, Odom went through a highly publicized separation and eventual divorce with Khloe Kardashian, and was rumored to be struggling with drug use. Odom was also arrested and charged with drunk driving on August 20, 2013.

Odom met with Clippers head coach Doc Rivers earlier in the season, leading many to believe that he would eventually return to the team. However, nothing ever materialized and Odom eventually signed with Laboral Kutxa of the Spanish ACB League on a two-month deal, but returned home after only a month due to a back injury.

Odom is far removed from his days as Sixth Man of the Year with the Los Angeles Lakers, but could be an interesting fit in New York if Jackson implements the triangle offense next season, considering Odom’s unique skill-set and unselfish style of play. The question with Odom is whether he is emotionally, mentally and physically engaged, which has not been the case since being traded from the Lakers to the Dallas Mavericks.

Note that Metta World Peace, longtime friend and former teammate of Odom, is also interested in a return to New York now that Jackson is in charge.

The Golden State Warriors have relieved Assistant Coach Darren Erman of his duties with the organization due to a violation of company policy, it was announced today. Erman, 37, was in his third season with the Warriors after spending four years with the Boston Celtics.

Warriors general manager Bob Meyers released this statement: “This is the type of decision that would be made across the board and irrespective of position within the organization. Obviously, the timing is unfortunate, but we hold all of our employees, whether in Basketball Operations or other aspects of the business, accountable for their actions and to the same standard. We move forward and thank Darren for his contributions.”

It is not immediately clear what company policy Erman may have violated. Erman was considered the top X-and-O coach on staff and is the second assistant coach to suddenly leave the Warriors’ bench after Brian Scalabrine was demoted to the Santa Cruz Warriors in recent weeks. Head coach Mark Jackson stated that the decision to demote Scalabrine stemmed from a “difference in philosophies.”

This latest shakeup in the organization comes with the playoffs right around the corner. Removing Erman adds more instability to the organization after rumors suggested that the Warriors’ front office was frustrated with Jackson’s inability to create cohesion within his coaching staff and had no immediate plans to offer Jackson an extension. Jackson has one year remaining on his current contract.

The Warriors are currently sixth in the Western Conference. Jackson’s future with the Warriors likely depends on how far the team advances in the playoffs, but this latest incident is another distraction that has surfaced at the wrong time for the franchise.