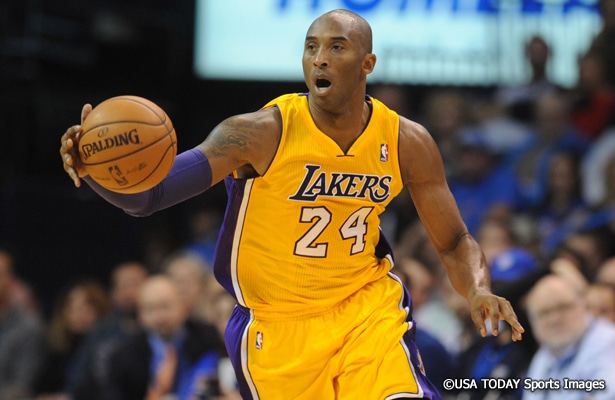 Kobe flies in to meet with Melo

Los Angeles Lakers superstar Kobe Bryant flew in late Wednesday night from a European vacation so he could play a key part in the team’s pitch to free-agent forward Carmelo Anthony on Thursday, according to sources with knowledge of the situation.

Bryant has a long history and friendship with Anthony and has been courting him for some time, but he felt it was important to be there when the Lakers made their pitch to him at an undisclosed location in Los Angeles.

via Ramona Shelburne of ESPN

Kobe has always been one of the lead recruiters in free agency for the Lakers. Typically, though, he’s been called on to help deliver quality role players for the mid-level exception, or veterans in that later stages of their careers willing to play for cheap in order to compete for a championship. This is the first time in the Kobe era that the Lakers have had significant cap space to go after a max level free agent, and it happens to come at the most crucial time of his career.

With two years remaining on his current contract, Kobe is looking at potentially being on a middle-of-the-road team or worse if the Lakers aren’t able to land Carmelo. If Carmelo signs elsewhere, there’s a good chance that Pau Gasol could follow suit, with several contenders like the Oklahoma City Thunder, San Antonio Spurs and Chicago Bulls after him. That’s going to leave the Lakers only second and third tier free agents to try to form a contender around Kobe with, a hard task to say the least.

The addition of Carmelo though gives them one of the league’s elite players right now. Carmelo, a healthy Kobe and Gasol could at least be competitive in the Western Conference, perhaps even good enough to truly contending depending on how they mesh and what pieces are added throughout the rest of free agency.

For so many years Kobe has had a reputation as someone who other players in the league don’t want to play with. The argument was never stronger than last summer when Dwight Howard walked away from a five year max contract offer to take less money and years from the Houston Rockets. Convincing Carmelo to join forces with him, though, would not only prove that he can get guys to come to L.A. to play with him, but insure that he is going to be competing for a championship during the final stretch of his career.

The Lakers have been trying to set a meeting with LeBron James as well, with the best-case scenario hopes of luring both him and Carmelo to Hollywood. Kobe has reportedly reached out to them and told them it would be just like it was on the Olympic team in 2012, where they were the stars and Kobe focused primarily on defense. Up to this point, though, LeBron has shown no desire to leave Miami. As a result, the Lakers are all in on Carmelo, hoping that playing with Kobe and Gasol on a max contract is enough to bring him cross country from New York. Besides, LeBron has made it clear that he is only going to pay for the max, basically torpedoing the Lakers’ chances at signing them both, which would require them to accept a starting salary somewhere in the $16-17 million range, well short of the max.

The Knicks are going to meet with Carmelo after the Lakers, so all of his meetings will be in the books on by the end of Thursday night and we should be only a couple of days at worst from him making a final decision.

Kyle Lowry has agreed to a 4 year, $48M contract to stay with Toronto, sources tell Yahoo.

This was the move the Raptors had to make, and they were able to do it without giving a fifth year to Lowry. Lowry has the ability to get out of the deal after the third year, giving him the opportunity to become a free agent when the league’s salary cap is expected to be it’s highest at 30 years old. That means potentially one more big pay day for Lowry, should he continue on his current level of play.

Letting Lowry get away meant a big step backwards for the Raptors, who lacked quality contingency plans in the case of his departure. The Miami HEAT were reportedly hot in pursuit, while the Los Angeles Lakers and Houston Rockets were also trying to sign him.

This move guarantees that the Raptors will be able to pick up where they left off last season. Raptors GM Masai Ujiri came with the hopes of returning the franchise back to relevance and that part of the job already seems complete, as they’re poised to make consecutive postseason appearances for the first time since the Chris Bosh era.

This spells the end of the Isaiah Thomas era in Sacramento. With Rudy Gay opting in the Kings’ chances of keeping Thomas were low to begin with, but now it is all but official that he’ll be playing elsewhere next season.

The Kings still hold the ability to offer him more money than any team and could sign-and-trade him. The Boston Celtics, Detroit Pistons, Los Angeles Lakers and Miami HEAT have all contacted him to voice interest. He’s poised to receive a big pay increase no matter where he goes.

Meanwhile, the Clippers are going to scour a thin point guard market in search of a backup for Chris Paul. Paul has had some durability issues in the past, so finding a quality backup is going to be important for them. They’ve been quietly active in free agency so far, making it clear that they would move mountains to make room for Carmelo or LeBron. But once they make their intentions known, finding a backup point guard will become a priority for them.