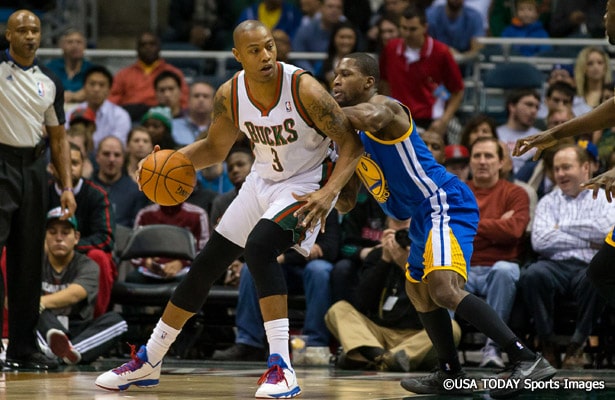 Bucks and Raymond Brothers, agent for Caron Butler, in discussions to buy out Butler’s contract.

Via Gery Woelfel of the Racine Journal Times on Twitter

At the beginning of the season Butler was excited to play just 28 miles away from his hometown, but the season is now lost for the Bucks. They currently sit in last place and they have their starting small forward for many years to come in rookie Giannis Antetokounmpo. There’s was no future for Butler with the Bucks past this season, so rather than letting him play it out they are going to cut ties, allowing him to potentially catch on with a contender for the rest of the season.

Butler will be mentioned amongst all of the contending teams, but Bleacher Report’s Ethan J. Skolnick mentioned on Twitter that there are few people that the HEAT organization hold in higher regard than Butler.

The HEAT has 15 players under contract currently after signing DeAndre Liggins to a 10-day contract today. Butler has to be bought out before March 1 in order to be playoff eligible. As long as he is, the HEAT can sign him after Liggins’ deal expires and have him eligible for the playoffs.

Butler was averaging 11 points, 4.6 rebounds and 1.6 assists for the Bucks this season. He was only shooting 38 percent from the field, but he’s still a viable threat from beyond the arc, where he was hitting at a 36 percent clip.

The New York Knicks will sign Shannon Brown to a 10-day contract on Thursday.

Brown was previously with the San Antonio Spurs on a 10-day deal.

The New York Knicks freed up two roster spots by buying out Beno Udrih and Metta World Peace. Brown will help fill in while Iman Shumpert recovers from a knee injury, his chance to stick with the team may be limited, though, due to the fact that their bigger need beyond these next 10 days is at point guard.

Clark is a versatile defender who really came into his own last year with the Los Angeles Lakers. He struggled with the Cleveland Cavaliers before being traded to and bought out by the Philadelphia 76ers. They’re thin on the frontline right now, though, and Clark can defend either forward position.

“No one at the NBA, nor the competition committee, has had any serious conversations about increasing the size of the floor or adding a 4-point line. Rod Thorn and Kiki VanDeWeghe were entertaining a line of questioning about out of the box ideas and ESPN.com chose to make a story that doesn’t exist.”

It would be cool to see it in an exhibition contest, or especially an All-Star game, but based on how much the league has separated itself from this concept, we’ll probably never hear them talk about it again.