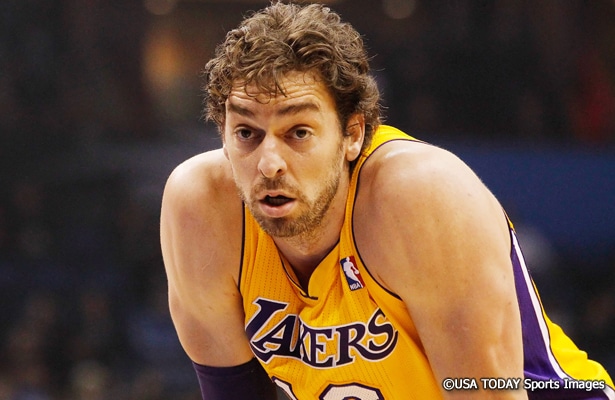 The NBA’s trade deadline is next Thursday. Will Pau Gasol still be with the Lakers?

“My preference would be to stay,” Gasol said Thursday. “That’s what I’ve been saying all year, though the circumstances are difficult right now for our team and nobody’s too happy. But it’s still my team and I still want to be here.”

But after so many false starts and trade rumors over the years, does he even feel wanted by the Lakers?

“I think I feel wanted. Otherwise I wouldn’t be here,” he said. “The team would have pulled the trigger with prior opportunities that I’m sure had been on the table. I feel like the team appreciates me. It’s just a tough moment, I think, as far as the franchise losses. That always is going to stir things up and you’ve got to look at options and possibilities to get better as a team, a franchise.

“I don’t take it personal. I appreciate that a lot of teams have showed a lot of interest in me and believe in my abilities to make them better and help them be a better team.”

Despite all of the rumors, Gasol has spent six seasons with the Lakers and enjoyed a lot of success in purple and gold, so it’s understandable that part of him wants to remain in L.A. However, both sides likely see that the marriage is going to come to an end in the near future.

If Gasol doesn’t get traded before the deadline, it seems pretty likely that he’ll walk as an unrestricted free agent this summer. It’s hard to imagine Gasol wanting to re-sign with the Lakers given his relationship with head coach Mike D’Antoni and his desire to play for a winning team at this stage in his career. It’s also hard to imagine the Lakers wanting to re-sign Gasol since they’re trying to preserve their cap space and bring in younger players.

That’s why trading Gasol now seems to be the best move for L.A. Rather than losing him for nothing over the offseason, they should try to get some assets back for the big man while they can. The Lakers’ asking price remains very high for Gasol, but as the deadline gets closer, L.A. should settle for one of the offers that they receive and pull the trigger.

Thunder Want to Acquire a Wing

Armed with trade exceptions, OKC has been active in search for a shooter to fortify them for title run, league sources tell Yahoo.

To be exact, the Thunder are shopping more for a two-way wing player than simply a shooter.

Evan Turner and Gary Neal are two wing players who have been linked to the Thunder at various points this season. I’m sure other names will surface in the days to come as well.

The defending Western Conference champion Spurs offered point guard Beno Udrih a chance to return to San Antonio this summer, but he declined, signing a free-agent deal instead with the Knicks.

Now that Mike Woodson has banished Udrih and he has asked for a trade, the Spurs might be a candidate for the Slovenian point guard who has two rings from his time in San Antonio.

Yesterday, the Wizards were rumored to be expressing interest in the veteran point guard and today add the Spurs to the list of teams that may be pursuing the point guard before the deadline.

Other teams will likely inquire too, since there are a number of teams that need a reserve floor general and every team in the league knows that Udrih is available since he is out of Woodson’s rotation. The Knicks have no use for Udrih at this point, so it shouldn’t take much to acquire him.

In New York’s game on Wednesday, the Knicks were without J.R. Smith and then Iman Shumpert left the game with an injury in the second half, and Udrih still didn’t see the floor.

Teams are interested in the 31-year-old Udrih since he’s a reliable reserve. Over the course of his 10-year NBA career, he has averaged 8.9 points and 3.6 assists in 23.3 minutes.

»In Related: If you love NBA trade talk, be sure to pick up Basketball Insiders’ 2014 NBA Trade Deadline Guide. It is 100 pages of new content, with 30 team profiles, tons of features and much more. Download it here!
Join our Telegram channel for our exclusive free betting tips, picks and offers.