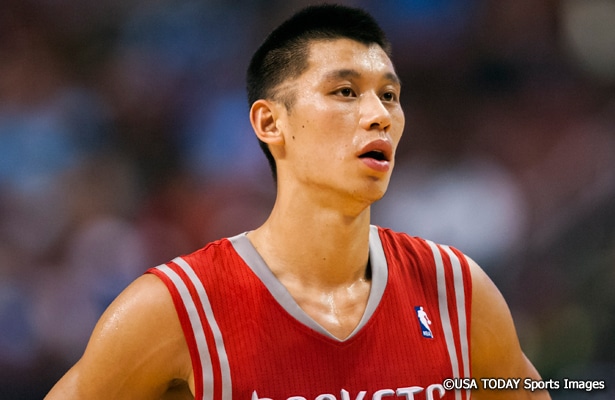 The New York Knicks are interested in trading for Jeremy Lin.

The Knicks let Lin sign with the Houston Rockets in the 2012 offseason.

New York has been searching for trade possibilities at point guard.

Lin’s contract expires after the 14-15 season, which preserves their cap flexibility for 2015.

via Chad Ford of ESPN (on RealGM)

As a guest on Bill Simmons’ podcast on Tuesday, Chad Ford mentioned one of the strangest rumors to emerge this trade season. He said that the Knicks have expressed interest in trading for Jeremy Lin, just two years after letting him walk to the Rockets as a restricted free agent.

This rumor is a head scratcher, to say the least.

The Knicks decided that Lin wasn’t worth the poison pill contract that Houston signed him to when he was coming off of the best stretch of his career, so why would they decide he’s worth it now (and worth giving away assets for) when he’s been relegated to the Rockets’ bench? Sure, New York needs an upgrade at the point guard position, but it’s surprising that they’d come full circle to Lin, especially since his salary is on verge of ballooning to $15 million (which was the number that kept the Knicks from re-signing him in the first place).

It certainly seems that the Rockets are open to moving Lin if the right offer comes along, but it’s unclear what New York would offer for the point guard. Anything can happen around the trade deadline so this isn’t impossible, it just seems very strange.

Toronto would love to make a deal for Rajon Rondo, but I’m told Rondo would not re-sign a long-term contract in Toronto after next season…

via Chris Broussard of ESPN

Yesterday, a report surfaced that the Sacramento Kings and Boston Celtics had discussed a potential blockbuster deal involving Rajon Rondo, but that the talks ended when Rondo made it clear he wouldn’t be interested in re-signing with the Kings after his current deal expires after next season.

Now, it appears Rondo feels the same way about inking a long-term deal with the Toronto Raptors, which will likely kill any chance of Rondo being traded to Canada despite the Raptors’ strong interest.

Similar to Carmelo Anthony back in 2011, Rondo has control in this situation because teams won’t want to meet Boston’s high asking price and part with significant assets without a long-term commitment from the veteran point guard. This is the exact same way that Anthony got himself traded to the New York Knicks.

At this point, we don’t know which teams are on Rondo would be open to re-signing with, but it’s likely only a matter of time until this information comes out.

Hearing Thunder has interest in Gary Neal, who would give them a nice perimeter shooter.

via Gery Woelfel of the Racine Journal Times

Hearing Charlotte continues to pursue Bucks guard Gary Neal, who has been openly shopped by Milwaukee since January

As Stein mentioned, the Milwaukee Bucks have been shopping Neal for quite awhile and it seems likely that he’ll be dealt before Thursday’s deadline.

Neal hasn’t really fit in with the Bucks this season and he hasn’t the team’s struggles well. He was also reportedly involved in an altercation with Larry Sanders following one of Milwaukee’s losses, which increases the likelihood of his days with the Bucks being numbered.

It’s well-documented that the Thunder and Bobcats are each looking for a shooter, and Neal makes sense for both teams.