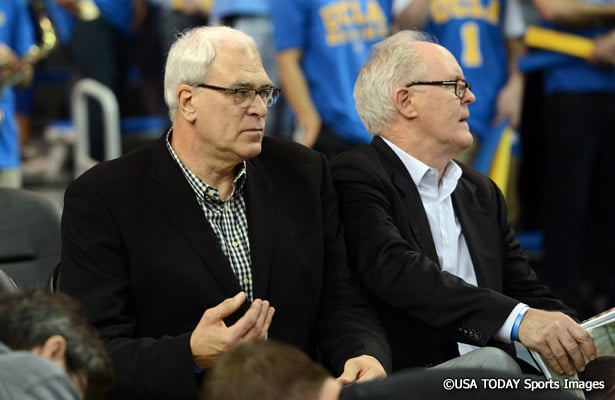 There are several opportunities that intrigue and await him, ongoing discussions about a possible return to the NBA that are real enough that he won’t reveal which teams he might be talking to and what the timeline might be. But lest anyone think we’ll see him sitting in that padded throne on the bench anytime soon, think again. His twice-a-week sessions with a trainer and chiropractor have worked wonders for his health after all those hip and knee replacements, but it appears he’s eyeing a bigger prize these days.

“I don’t want to be on the sidelines,” Jackson says with a grin as he heads for the elevator and disappears yet again. “That’s for damned sure.”

Jackson has been maintaining this tune since the Lakers decided to hire Mike D’Antoni instead of him after firing Mike Brown last season.

What appears far more likely is that he’s going to join a team’s front office, perhaps as a President of Basketball Operations or General Manager. The Cleveland Cavaliers are one team in particular that could make a run at him, and then of course there’s the team at the center of our second rumor who makes a great deal of sense for him as a potential GM as well.

Isiah Thomas, Pistons not reuniting [Pistons owner Tom] Gores has given no indication about Dumars’ future, and Dumars hasn’t given any of his own to date.

Sources told The Detroit News the only conversations Gores and Thomas have had revolved around the Bad Boys reunion, when Gores stepped in financially, listing himself and the Detroit Pistons organization as presenting sponsors for the events.

Via Vincent Goodwill of the Detroit News

While Joe Dumars did put together the last Pistons’ championship team back in 2004, he’s completely lost all the stature and credibility that came with the accomplishment. Not only has Dumars run through head coaches like he’s handing out 10-day contracts for them rather than multi-year deals, the Pistons haven’t made the playoffs for four seasons.

There are big decisions to be made this offseason with the pending free agency of Greg Monroe and another head coaching search to conduct. However, Dumars may not be calling the shots as his deal is set to expire at the end of the season.

It’s expected that the team will go in another direction, but Thomas is not one of them. As much history as he has with the Pistons as a player, his reputation as an executive is worse than Dumars and would not be a step in the right direction. That’s why they’re publically willing to get in front of this rumor now.

“With the recent acquisition of additional backcourt depth to our roster, we believe this is in the best interests of both parties,” Higgins said.  “We want to thank Ben for his contributions over the past two seasons and wish him the best as he moves on in his career.”

Because Gordon was waived after the March 1 deadline to be playoff eligible, he’s ineligible for the postseason. That takes every potential playoff team off his list of teams to join, because no team is going to sign a player right now who can’t play for them in the postseason.

Gordon’s only chance to catch on with a team is with one that is lottery-bound, but in that case most of them have young players they’re dedicated to giving minutes to the rest of the season.

He’ll most likely have to wait until the offseason to be picked up.