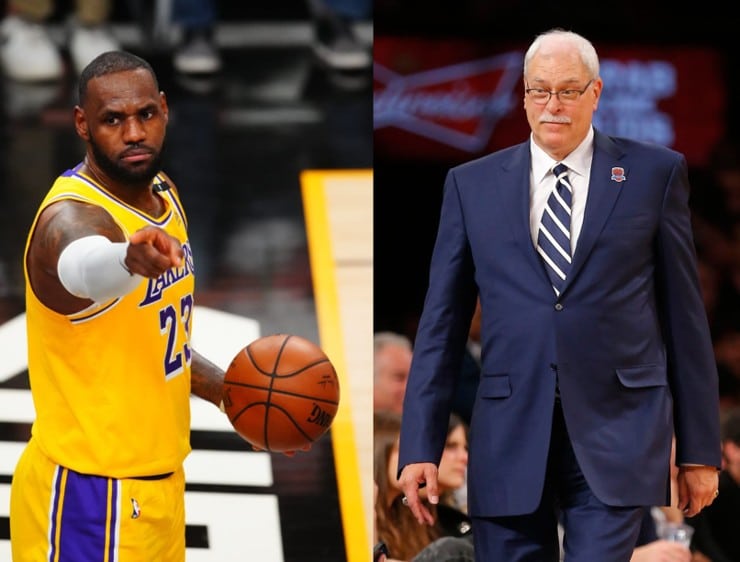 NBA rumors are a dime a dozen each season, and this one particular story pertains to Phil Jackson wanting the Lakers to trade LeBron James. As ridiculous as it sounds, maybe it’s not far off from the truth. When Bill Plaschke of The Los Angeles Times went on “The Doug Gottlieb Show,” he discussed this latest gossip.

“I’ve heard that Phil would like LeBron traded. I’ve just heard that, but I’ve got nothing to back that up. No on-the-record stuff to back that up,” said Plaschke. Of course, Plaschke opened up about his one-on-one interview with Lakers owner Jeanie Buss.

Other NBA news, trade rumors and betting content is on the main page.

Though, Plaschke’s response is confusing. Did he hear this story from Jeanie Buss? If he heard this rumor from someone else within the Lakers organization, Plaschke is likely covering for him or her. Or maybe folks are just reading too much into it. Every reporter wants to be the first one to break a news story.

LeBron James had a great season statistically, and does Westbrook stay put?

Furthermore, although LeBron James is turning 38 years old this December, he is still playing at a high level. If the Lakers do trade him, now is the time. His value is high. In a total of 56 games played during the 2021-22 regular season, the 18-time All-Star averaged 30.3 points, 8.2 rebounds and 6.2 assists per game. LeBron averaged at least 30 points per game for the first time since the 2007-08 season.

However, James did attempt 21.8 field goals per game. For any general manager or coach to ask one player to do this much work on a loaded roster at his age is quite puzzling. He missed time because of a knee injury he sustained in January. He suffered from swelling in his left knee. Not to mention, Anthony Davis only appeared in 40 games due to injuries.

And Russell Westbrook averaged 18.5 points, 7.4 rebounds and 7.1 assists per game as well. Speaking of Westbrook, according to this same source, the Lakers front office are aiming to retain the guard.

A month ago, rumors were mounting in league circles that general manager Rob Pelinka would trade Westbrook during the offseason. Honestly, trading the triple-double king makes more sense than shopping LeBron. Like him or not, James is a better team player.

Additionally, if this LeBron James trade rumor is true, then Phil Jackson better hope the Lakers can win a championship with Russell Westbrook, Anthony Davis and a couple of other superstars. Otherwise, a decision like this could go down in NBA history as the worst trade ever. If the plan failed, Buss would not hesitate to can Jackson and Pelinka.

An owner always needs a scapegoat or a fall guy. Remember when the Hornets traded Kobe Bryant to the Lakers? How about when the Supersonics traded Scottie Pippen to the Bulls? Yeah, moving LeBron right now would be dumb.

He could go on to win another ring with some other contender, such as the Celtics, Grizzlies, Warriors, Suns or Bulls. Also, it would come as no surprise if LeBron wanted to return to the Heat.

BetOnline is one of the best NBA betting sites | NBA Rumors