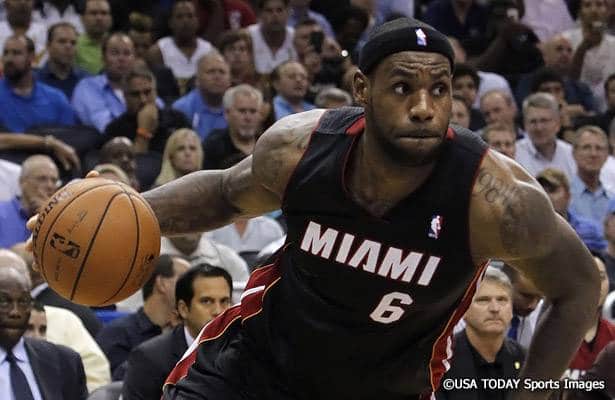 via Marc Stein of ESPN.com

On Wednesday night, ESPN released USA Basketball’s 28-man talent pool from which they’ll select players for the next three summers.

Some of these players – like LeBron James, Carmelo Anthony and Chris Paul – won’t participate in the 2014 World Cup of Basketball, opting just to play in the 2016 Olympics, assuming the team qualifies.

There are some surprises from the 28-man pool, including Kyle Korver, Bradley Beal, Gordon Hayward and Deron Williams. There are also some obvious snubs, most notably John Wall.

Derrick Rose is in the pool, which makes sense because he’s one of the NBA’s best players when he’s completely healthy. Since this is the talent pool for the next three summers, Rose should be able to participate once he returns from his recent meniscus injury.

An official announcement from USAB chairman Jerry Colangelo and head coach Mike Krzyzewski will be made today.

Green Wants to Remain in Phoenix

Green faces the Indiana team that traded him away on Wednesday night. Playing a team that recently gave up on him would be a bigger deal if he had not already done this five times in his career.

“I was not mad at all,” Green said. “Obviously, I wanted to play. This second time around, I’m more of a professional. I understand if I play or if I don’t play. I was on a winning team last year. I was fine if I was giving people water. Now, I’m here and I’m glad to be here. I don’t want to ever go anywhere.”

Green has started 22 of 40 games due to the Suns’ injuries but also has fared better with Phoenix’s shooting freedom, averaging 13.4 points and making 37 percent of his 3-pointers.

via Paul Coro of AZCentral.com

This has been a huge season for Gerald Green, the best of his NBA career. He was given a significant role on the Suns and he has taken full advantage of it.

And it makes sense that the 27-year-old wants to find one team he can stick with and one city he can call home. Green’s journey to Phoenix included stints in Boston, Minnesota, Houston, Dallas, Russia, China, New Jersey and Indiana as well as several D-League assignments. Green hasn’t had a typical playing career since being drafted with the No. 18 pick in the 2005 NBA Draft. He’s sick and tired of moving around and would like some stability.

After this season, Green has one more year on his contract at $3,500,000 and then he’ll become an unrestricted free agent.

When the Suns landed Green in the Luis Scola trade, it was mainly to acquire the first-round pick and Miles Plumlee from Indiana. Green was a veteran on a team that was clearly rebuilding and it didn’t seem like he’d have much a future in Phoenix. However, with the team’s surprising success and Green’s breakout season, it’s certainly possible that both sides decide to continue this marriage.

Los Angeles Clippers point guard Chris Paul, who has been sidelined since Jan. 3 with a separated right shoulder, said he hopes to be back on the court in time for the NBA All-Star Game on Feb. 16 and would like to play in the game.

“If I can play, I’m going to play, I love to play that much,” Paul said Wednesday. “The All-Star Game is in New Orleans and that’s part of me. That’s where I played my very first All-Star Game at. Anytime you have that opportunity, I’m not going to pass that up because it’s not guaranteed to happen next year.”

via Arash Markazi of ESPNLosAngeles.com

This is great news for Clippers fans, because it sounds like Chris Paul will be returning sooner rather than later. It’s also nice to see an NBA superstar taking the All-Star Game seriously – determined to give the fans what they want to see.

Later in the interview, Paul said that he will be attending the event even if he isn’t able to play.

Paul doesn’t need to rush back from injury because L.A. has played very well with him sidelined. As Markazi noted, the Clippers are 7-2 without Paul with their only two losses coming against the San Antonio Spurs and Indiana Pacers on the second night of road back-to-backs.

Paul can take his time, but it’s understandable that he wants to get back on the court as quickly as possible, to help his team and participate in the All-Star festivities.