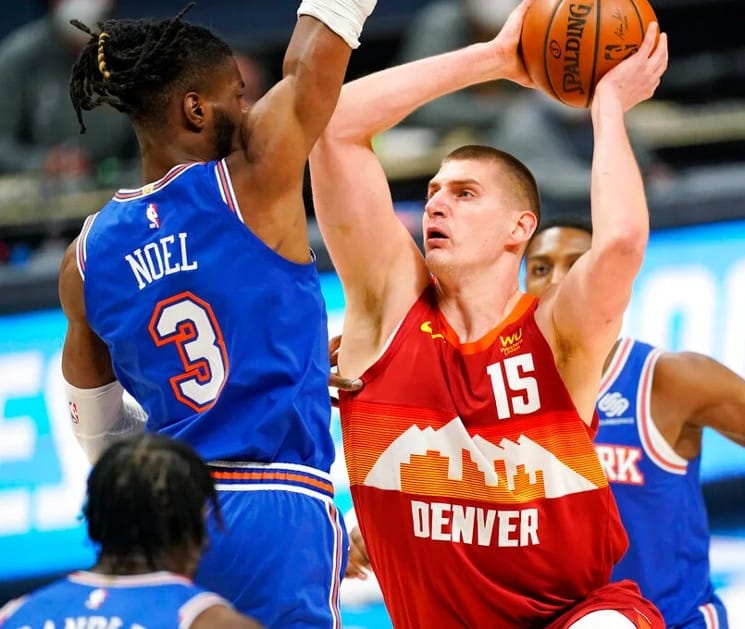 The Denver Nuggets and Portland Trail Blazers will meet at the Moda Center in Portland in the fourth and final meeting between these two teams. Will the Nuggets continue their five-game winning streak? Or will the Trail Blazers get back on track after losing to the warriors by 37 points on February 24th? Below, we’ll preview the Nuggets vs Trail Blazers game and give free NBA picks for tonight’s clash in Oregon.

The Nuggets are 28-31 against the spread this season, while the Trail Blazers are 25-35. Denver is currently the 6th seed in the Western Conference, sitting just 2.5 games behind the Utah Jazz for the 4th seed and the top spot in the Northwest Division. The Trail Blazers, on the other hand, are 25-35 and are fighting for a spot in the Postseason Play-In Tournament. They currently sit in the 10th seed, so would be ‘in’ if the season were to end today.

In news not so directly related to a handicap in this game, the Denver Nuggets are on pace to have the lowest local NBA television rating in 15 years. Even with probably the best player in Nuggets franchise history gracing the court every night, they are struggling to draw eyes to the team. A lot of that has to do, though, with people in the area not having access to Altitude TV in Denver and the surrounding area.

This is stunning. The Nuggets’ 0.19 local TV rating is the lowest in the league and on pace to be the lowest NBA local rating in at least the last 15 years, per @sbjsbd. The glory years of Nuggets basketball led by the best player in franchise history continue to go unwatched. pic.twitter.com/ioOosodDhE

The Trail Blazers, on the other hand, have effectively begun a new generation of Blazers basketball. They traded CJ McCollum to the New Orleans Pelicans, and Damian Lillard is likely to miss the remainder of the season. It”s unclear which direction the Trail Blazers will go in regards to their star guard.

Below, we’ll go over the injury news for the Nuggets Trail Blazers game on  Sunday night. While these are the injuries as of now, we may see the Nuggets rest guys on the second night of a back-to-back. The Blazers shouldn’t have many late scratches as they haven’t played since the 24th.

Check out a complete breakdown of both teams below.

The Denver Nuggets are streaking, having won their last five games and going 7-3 over their last 10. Over those last ten games, they’ve done a good job defensively, ranking 8th in Defensive Rating. They are also 11th in Offensive Rating. The defensive improvement for the Nuggets throughout the season has been a welcome sight, as this team could not get stops at the beginning of the year, as they ranked 27th in Defensive Rating in November. The Nuggets are also the best team in the NBA in limiting second chance points, ranking 1st in opponent Offensive Rebound %.

Prior to getting walloped by the Golden State Warriors on the 24th, the Blazers had won four straight games against the Lakers, Knicks, Bucks and Grizzlies. Those are some serious wins. They did so without Damian Lillard, and are instead getting major contributions from Josh Hart, Anfernee Simons and Justice Winslow. Winslow is averaging 12.3 points and 6.6 rebounds per game as a member of the Blazers, and may be looking to revive his career after originally looking like an early-round draft bust.

If we give the Blazers a mulligan on their loss to the Warriors, they were top 10 in both Offensive and Defensive Rating in their previous five games. Even without their star players, Portland has been playing scrappy, inspired basketball as a group of players that have been rejected by other organizations.

I think the Portland Trail Blazers are catching too many points tonight. The Nuggets will be playing their third game in four nights and played a close game just last night, squeaking out a five point win against the Sacramento Kings.

The Blazers, on the other hand, haven’t played since the 24th and will be motivated to bounce back after their embarrassing loss that night. I also don’t completely buy the ‘tank’ narrative. If you’ve watched the Blazers play basketball the last six games, they play inspired.

Also, they are right in the hunt for a play-in game, so technically still have something to play for. I’ll take the team with fresh legs, fresh off of humiliation getting 8 or more points. Back Portland to keep it close at home, I have this line closer to 4.5/5.

I also like the Under in this game, as over the last five games both of these teams rank in the top 10 in Defensive Rating.

Get free NBA bets for the Nuggets vs Trail Blazers game at BetOnline below.