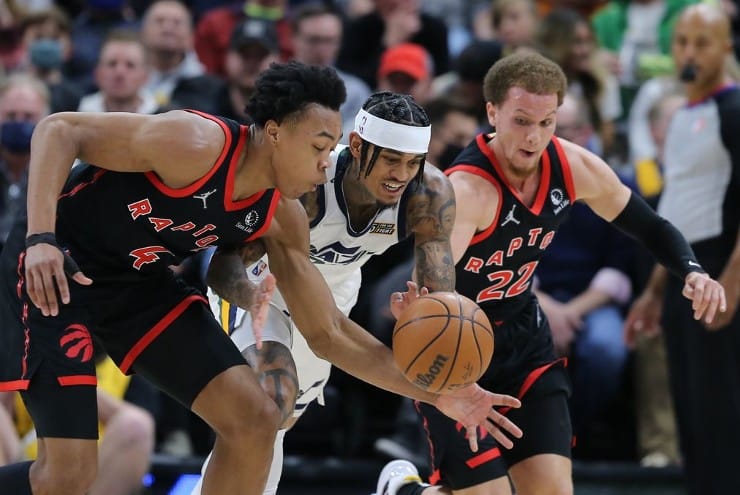 The Toronto Raptors have picked up the options of Malachi Flynn, Scottie Barnes, and Precious Achiuwa. Flynn’s $3,873,025 team option for the 2023-24 season was exercised.

According to a few NBA betting sites, the Raptors have the 16th-highest odds of winning the championship in 2023. Their title odds are low, but some sportsbooks are anticipating another playoff appearance.

The Raptors have picked up the fourth-year option on guard Malachi Flynn, sources tell ESPN.

Flynn was selected 29th overall by the Raptors in the 2020 NBA Draft.

In the Raptors’ 119-114 win over the Philadelphia 76ers on April 7, 2022, Achiuwa recorded a season-high 20 points in 40 minutes played. He ended the regular season with six double-doubles.

During the first round of the 2022 NBA Playoffs, the center logged playoff career highs of 10.2 points, 4.8 rebounds, and 27.8 minutes per game against the 76ers.

Not to mention, Barnes’ third-year club option of his rookie contract was exercised as well. He is projected to earn $8,008,680 with the Raptors in the 2023-24 season.

His team options are part of the four-year, $33.06 million deal he signed with the team last August.

The Raptors selected Barnes fourth overall out of Florida State in the 2021 NBA Draft. In 74 starts of his rookie season, the guard averaged 15.3 points, 7.5 rebounds, 3.5 assists, and 1.1 steals.

He won Rookie of the Year and was selected to the NBA All-Rookie First Team.

Entering the 2022-23 season, the Raptors are aiming to improve upon last season’s 48-34 (.585) record and fifth-place finish in the Eastern Conference.

With Malachi Flynn, Scottie Barnes, and Precious Achiuwa present to support Zach LaVine and Pascal Siakam, anything is possible. But the team has to stay healthy. That should go without saying.