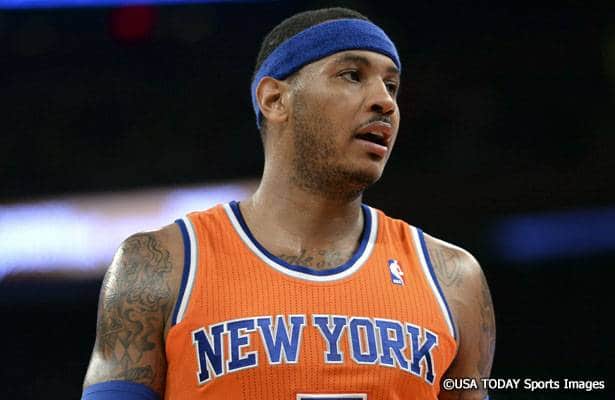 Only now, the gloom of the Knicks’ season – the uncertainty of the franchise’s future – left that man to believe it’s possible Carmelo Anthony could leave New York in free agency.

“Chicago is much more in play for him than L.A.,” the source said.

The Bulls traded Luol Deng for draft picks and are leaning strongly toward using the amnesty provision on Carlos Boozer. They could create a maximum contract slot for Anthony, pairing him with Derrick Rose. For Anthony, it is leaving a cap-strapped team through 2015 for a Chicago proposition with significant risks of its own. No one can be sure of Rose’s return to his MVP greatness, but everyone can be sure of one thing: The franchise’s mandate isn’t winning championships, but sidestepping luxury and repeater taxes to turn the fattest possible profits for the owner

While the Bulls may be the favorite in the eyes of Wojnarowski’s source, what really separates them from the New York Knicks or Los Angeles Lakers? And as Wojnarowski alludes to, of the three, the Bulls’ commitment to winning is most in question on the heels of the Deng trade. Say what you want about the personnel move the Lakers and Knicks have made, they’ve proven that money isn’t an object in their pursuit of success.

One of the main drawbacks of the Knicks and Lakers is the internal turmoil, but the between Tom Thibodeau’s top assistant Ron Adams being dismissed and the Luol Deng trade the Bulls’ are at least as dysfunctional (maybe even more so publically) than either. Anthony has always maintained a desire to stay in New York, and the Lakers will have one of his best friends in Kobe Bryant serving as a lead recruiter. Add in the uncertainty surrounding Rose and Thibodeau’s futures, and the Bulls could be trying to get involved in a race they don’t stand a very good chance in.

But hey, it’s a gamble worth taking. If you can potentially turn Luol Deng and Carlos Boozer into a few draft picks and Carmelo Anthony along with the temporary cap relief they’re currently enjoying, you have to go for it. However, the Bulls aren’t putting all their eggs in this basket. They’re likely going to be realistic about their chances at Anthony, and line up several quality contingency plans for the most likely outcome: Anthony ending up elsewhere.

The Cavs will have to overpay him. He turned down a three-year, $30 million deal from the Bulls before they traded him.

What if the Cavs offered a three-year, $36 million deal? Would he consider it?

If he reaches free agency, some believe the Cavs’ odds to signing him drop considerably.

The Bulls could conceivably re-sign him this summer.

Via Bob Finnan of the News-Herald

The notion that the Cavaliers’ odds to sign him drop significantly if he hits free agency is not exactly correct, because they’re going to retain his Bird rights and have the ability to offer him more than any other team. Because Deng is in the final year of his contract, the Cavaliers can offer him up to a three year contract prior to June 30.

By becoming a free agent, he’d be eligible to receive a five year deal from them. So their chances are actually better, unless of course they’re not willing to offer him more than three years. At 28 years of age, it wouldn’t be unreasonable for Deng to ask and holdout for a four/five year deal in order to stay in Cleveland.

The main thing to take away from this report is that the Cavaliers want to keep him, and short of LeBron James returning, the only thing getting in the way of the two parties coming to an agreement is the Cavaliers. They have no restrictions in what they can offer Deng. If they let him go, it’s because another team in the league is willing to pay what they aren’t.

I’m told the #Celtics will have two tribute videos tomorrow, one each for Kevin Garnett & Paul Pierce

Via Baxter Holmes of the Boston Globe

Considering their somewhat abrupt and unrequested trade last summer, this is a bit surprising. Pierce is one of the greatest Celtics ever, so it was always inevitable that eventually have his day where his jersey is retired. And even though he wasn’t there long, Garnett left a lasting impact on the franchise that deserves to be honored as well. But, paying tribute to them just months later in their return as members of the Brooklyn Nets? It’s the right thing to do, but it also would have been understandable if they decided to wait until a more fitting moment, like not right before Garnett and Pierce look to hand them a loss. It’s going to be an awkward night at the Garden to say the least.