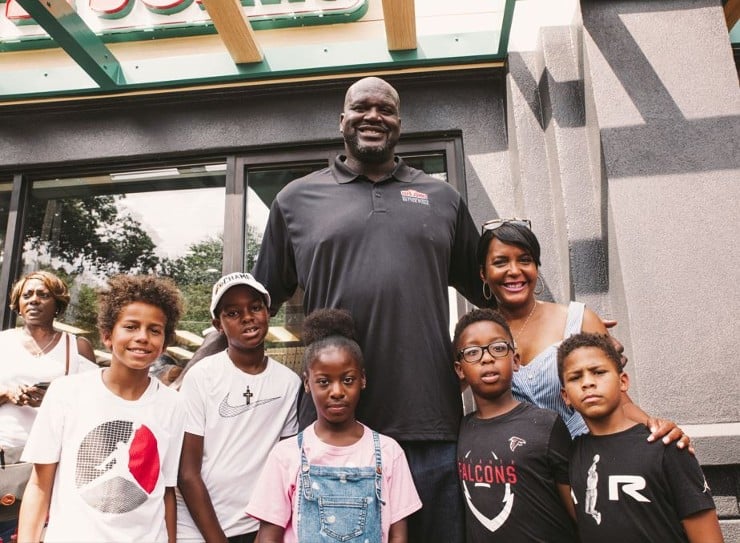 Shaquille O’Neal is a part-time businessman and full-time philanthropist. One of his favorite hobbies is giving gifts to kids in need. But his generosity is not exclusive to children. He also enjoys helping the homeless.

In an interview with People, the retired four-time NBA champion said, “I try to make every day a meaningful moment for a fan, and especially a kid.”

“My favorite thing to do is when I’m in Best Buy, Walmart, if I see a kid, get them something that I see he’s looking at,” continued O’Neal.

“Oh, like yesterday I saw a couple kids. I bought a couple bikes, a couple more scooters.”

When asked what he would do if parents refused a gift, O’Neal responded, “Well, first I always tell them to ask their parents if they’re going to take things from strangers.”

“You don’t want kids to get used to having a stranger come up and say, ‘Hey, I got a whole lot of money. Can I buy you something?'”

Shaquille O’Neal blessed a family of 11 with a new 15-passenger mini van & a new truck for the father, took the entire family out to dinner, & even paid for a different table’s meal, while leaving a $1,000 tip.

Shaq is one of the best humans on this planet! 👏❤️ pic.twitter.com/scMGSoMKhz

In February, O’Neal also bought a family of 11 a new 15-passenger minivan and a new truck for the dad. Plus, he took the family out for dinner, paid for another family’s meal and left a $1,000 tip.

The three-time Finals MVP also recalled a time when he helped a homeless woman on the streets outside of a restaurant in Texas. According to the Instagram post, it was in early July. 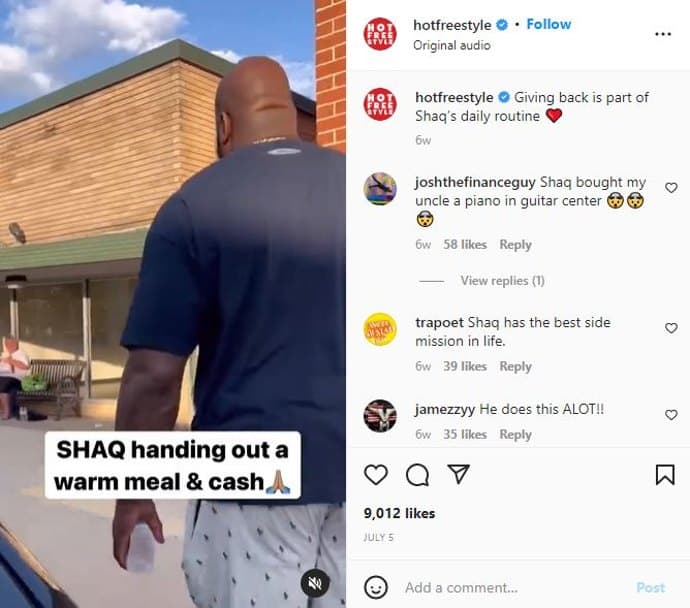 “There was a homeless lady in front of one of my favorite restaurants in Texas called Bigs,” O’Neal explained to People. “And I just gave her a plate of food, and somebody recorded it and posted it.”

His generosity didn’t go unnoticed. “Her sister had come in crying to the owner, saying, ‘Oh, my god, we’ve been looking for her for six months. We couldn’t find her. We didn’t know if anything was wrong with her.'”

“They tried to take her to get help. She didn’t want to get help, so she’s still out there, but at least her sister knows where she is. Her sister could bring her clothes and water or something. But, when I do stuff like that, I never record it.”

On Oct. 1, O’Neal and his Shaquille O’Neal Foundation are hosting The Event, the non-profit’s second fundraising gala, in Las Vegas. For live entertainment, John Mulaney, Maren Morris and Maroon 5 are scheduled to perform.

When asked about the foundation, O’Neal replied, “Our main goal is to provide resources to kids in need, especially in Las Vegas and Atlanta, where I live at.”