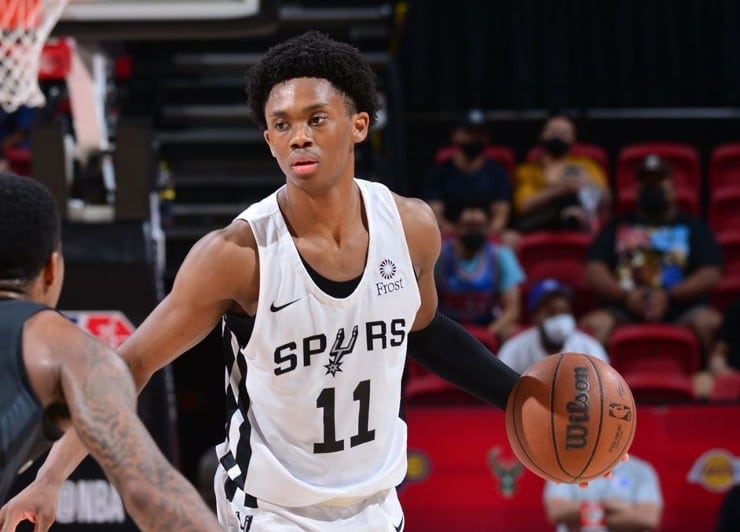 On Friday, the San Antonio Spurs waived 2021 first-round pick Josh Primo, according to sources. The reason for the guard’s release is unknown at this time.

Spurs CEO R.C. Buford released this statement: “It is our hope that, in the long run, this decision will serve the best interest of both the organization and Joshua.”

According to some NBA betting sites, the Spurs now have the third-lowest odds to win the championship in 2023. A few sportsbooks have dropped their odds of qualifying for the playoffs this season.

Waiver claim order is based on the final 2021-22 regular season standings.

That gets adjusted to the current standings starting on Dec. 1. https://t.co/fOHpdBJlWt

Primo was the youngest player of the 2021 NBA Draft. He was selected 12th overall out of Alabama. This roster move came as a shock for Spurs fans and NBA analysts alike. ESPN’s Adrian Wojnarowski said it best.

“His on-court development absolutely had the organization excited about his NBA future,” explained Wojnarowski. “Waiving Primo so abruptly without explanation is fairly unprecedented — and jarring.”

Two weeks ago, the Spurs exercised Primo’s $4.34 million team option for the 2023-24 season. This is part of the four-year, $18.42 million rookie scale contract he signed with the team last August.

Following this decision, the Spurs are leaving behind $4.14 million for the 2022-23 season and $4.34 million in dead cap space for the 2023-24 season. Needless to say, the guard had to have done something questionable to warrant this release.

“He’s a talent,” an anonymous NBA executive texted. “Everyone is trying to find out what the hell happened.” Spurs head coach Gregg Popovich declined to issue a statement to the media on Primo.

For right now, everyone is left to play the guessing game.

Lot of scrambling among NBA executives trying to figure out why the Spurs waived Primo. "He's a talent," one exec texted. "Everyone is trying to find out what the hell happened."

The 19-year-old is now in his sophomore season.

In losses against the Charlotte Hornets and Minnesota Timberwolves this season, Primo finished with 10 points and 3 rebounds in both appearances.