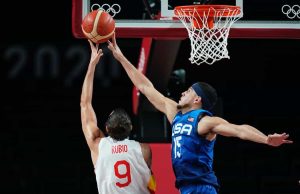 Team USA survived a first-half scare to beat Spain for the fourth Olympics in succession last night. The 95-81 win ensures the American team will now move onto the semi-finals in Tokyo.

It wasn’t all plain sailing for the hotly-tipped American outfit, though: at one point in the second quarter, Spain held an 11 point advantage over their opponents, leading 40-29, thanks to a great all-around performance from Minnesota Timberwolves point guard Ricky Rubio.

Rubio would finish up as the game’s top points scorer with 38 points to his name, hitting 8/8 from the free-throw line.

Ultimately, the fine performance from Rubio wasn’t to be enough though. The remaining four players who started the game for Spain had issues finding the hoop, amassing just 8 points between them. The usually reliable Spanish 3-point shooters never got going either, finishing up with just 7/23. 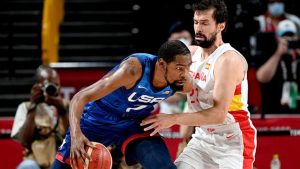 With this level of shooting profligacy on full display throughout, it was little surprise when the defending Olympic champions started to take back control towards the end of the second quarter, leveling things up at 43-43 just before the break.

It was Brooklyn Nets star Kevin Durant who was the main thorn in Spanish sides. His 29 point haul led the American team in scoring. Durant went 5/5 from the free-throw line and chipped in with a tied-game high 4/7 attempts from downtown to boot.

The third and fourth quarter was much more like the one-way traffic expected: inspired by Durant – and an excellent cameo from the Milwaukee Bucks Jrue Holiday (13 points; 5 assists) – team US won out 95-81.

Durant was clearly impressed with his country’s second-half transformation, stating as much in the post-match interview:

“We drove it to the rim at the end of the second,” said Durant, “and were able to get our rhythm back a little bit,”

“I like how we played from the end of the second quarter all the way up to finish the game and that’s how winners play ball.” 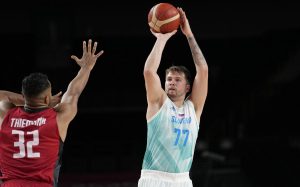 Team USA’s Olympics next opponents will be either Argentina or Australia, with the two sides scheduled to go head-to-head in their quarter-final clash today at 08:00 EST.

The first Olympic basketball semi-final is set for this Thursday, August 5, at the Saitama Super Arena, Tokyo at 1.15 pm local time (or Thursday, 00.15 am EST) and will feature Team USA vs. Argentina/ Australia.

Dallas Mavericks star Luca Doncic, ensured the Slovenians made the semi-finals, with a near-triple double: 20 points, 11 rebounds, and 8 assists, as his team defeated Germany 94-70. Doncic’s team will now duke it out with France in the other semi-final contest later that same day (Thursday). The game is set to tip-off at 8.00 pm local time (07.00 EST).