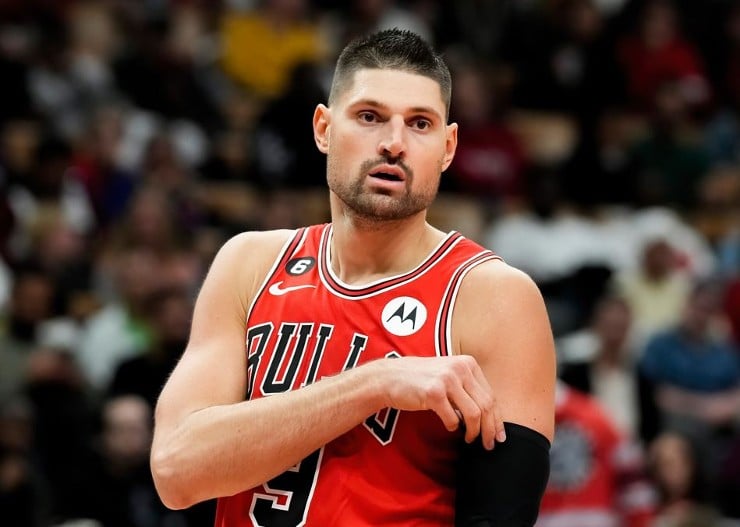 Watch Chicago Bulls center Nikola Vucevic flip off a fan after getting called for a travel during the first quarter of the team’s 115-111 loss to the New Orleans Pelicans on Wednesday night.

The incident occurred at the 4:32 mark of the opening quarter. After DeMar DeRozan passed the ball to Vucevic, the center was then called for a travel. As he jogged to the other end of the court, it appears Vucevic flipped off a fan nearby.

According to some NBA betting sites, the Bulls possess the 18th-best odds to win the championship in 2023. A few sportsbooks dropped their title odds after starting the season 6-7.

Watch Vucevic flip off a fan in the YouTube below.

Watch the video above. While some angles show one of the officials already beyond half court and away from the center, other clips show Vucevic directing his middle finger at the courtside seating area.

During Game 1 of the first round of the 2022 NBA Playoffs, in the Brooklyn Nets’ 115-114 loss to the Boston Celtics at TD Garden, Kyrie Irving flipped off Celtics fans after a shot.

Considering the evidence of Vucevic flipping the bird is all over social media right now, Bulls fans can expect a similar fine for the two-time All-Star.

New Orleans outscored Chicago 36-29 in the fourth quarter. Watch the game highlights below. DeRozan scored a season-low 9 points in Monday night’s win over the Toronto Raptors.

However, the forward led the Bulls in scoring on Wednesday with 33 points. DeRozan also logged 3 rebounds, 3 assists, 1 steal, and 1 block in 37 minutes played.

Late in the fourth quarter, Brandon Ingram hit a clutch 3-pointer, giving the Pelicans a 109-107 lead. DeRozan’s dunk then evened the score. Though, Ingram responded with a mid-range basket. DeRozan committed a turnover with 17.4 seconds left.

To watch other NBA miscellaneous videos, go to the main page.