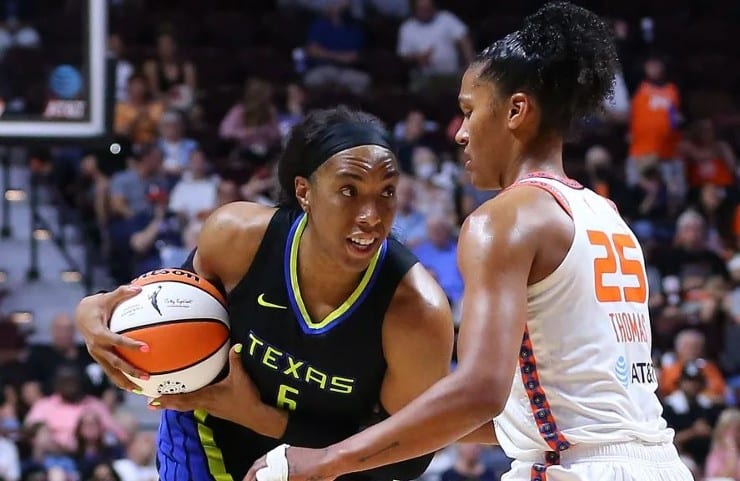 The Dallas Wings played the Connecticut Sun on Sunday, August 21st, and this Wings vs Sun matchup became the most-watched WNBA playoff game in 15 years. NBA fans probably tuned in as well.

According to Boardroom via Nielsen ratings, about 795,000 people watched Game 2 of the WNBA first-round playoff series. At home, the third-seeded Sun lost 89-79 versus the sixth-seeded Wings. In this best-of-three series, both teams are now tied at one game apiece.

Kayla Thornton led the Wings in scoring with 20 points. She also finished her performance with 5 rebounds and 4 assists in 28 minutes played. Thornton shot 8-for-12 from the field and 4-for-6 from 3-point range.

Furthermore, teammate Teaira McCowan ended her outing with a double-double. She amassed 17 points and 11 rebounds in 24 minutes of action. The center shot 8-for-13 from the floor.

After the game, McCowan told reporters, “I think we have to learn to capitalize. With us being a young team, you know, sometimes we get a little sloppy — as you could see at the end.”

“But, I mean, once we tighten that up, it’ll be good for the next game,” continued McCowan.

Meanwhile, Jonquel Jones and Brionna Jones scored team-highs 20 points with the Sun. Jones also ended her Game 2 performance with 9 rebounds in 22 minutes played. She shot 6-for-12 from the field.

While the Sun outscored the Wings 32-13 in the fourth quarter, most of the scoring came during garbage time. By the end of the first quarter, Dallas had a 22-7 lead over Connecticut. And the visiting team outscored the Sun 30-17 to start the second half.

However, the Sun’s 31-point deficit was cut to just 9 points with two minutes left in the game. Had the Sun won Game 2, not only would the Wings have lost the series, but the team also would have blown one of the largest leads in WNBA playoff history.

At College Park Center, Game 3 begins on Wednesday at 9 p.m. ET. This WNBA playoff game can be watched live on ESPN. Sun guards Bria Hartley and Jasmine Thomas are listed as out. Of course, Wings guard Arike Ogunbowale is listed as a game-time decision.

More news stories concerning the Wings vs Sun matchup are on the main page.