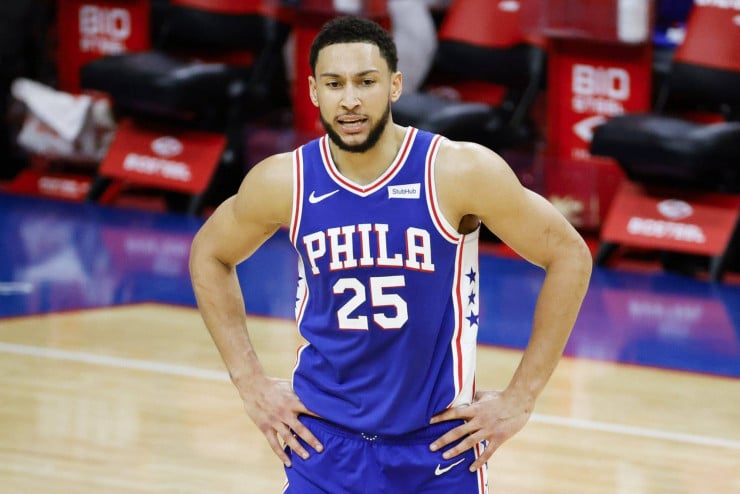 According to oddsmakers at BetOnline, the Portland Trail Blazers are the favorites to trade for Ben Simmons, if the 76ers are still aiming to move on from the three-time All-Star point guard. The Trail Blazers’ front office told reporters a few days ago that the organization has no future plans to surrender a first-round draft pick for the fourth-year player. However, the team has yet to make a big move this offseason. After the Trail Blazers, the Toronto Raptors have the second-best odds (+250) of trading for Simmons, followed by the Golden State Warriors (+300), San Antonio Spurs (+500), Indiana Pacers (+600) and Utah Jazz (+650).

Where will Ben Simmons be playing next season? pic.twitter.com/nJ8biol1PT

Putting aside the inconsistent performances in the playoffs, this is a difficult situation for Philadelphia because of the hefty contract alone. Sixers general manager Elton Brand is demanding a first-round pick for Simmons. He is not blinking anytime soon. There is a possibility that none of these teams trade for the guard. The stubbornness of a select few of general managers in this league can come back to bite them. Los Angeles Clippers small forward Kawhi Leonard opted out of his contract, but he chose to re-sign with the team anyways. Leonard kept his options open. The New York Knicks and Dallas Mavericks were showing interest in the player, though. Although a trade move never manifested, bettors were expecting a potential sign-and-trade. The same thing could happen to Simmons.

For the Trail Blazers, about a week ago, the team signed Hornets free agent center Cody Zeller to a one-year contract. On July 30, 2019, CJ McCollum signed a multi-year extension with the organization. McCollum earned $29,354,152 last season. The guard is set to earn $30,864,198 next season and $33,333,333 in the 2022-23 season. As stated before, Portland general manager Neil Olshey is refusing to give up a first-round pick for Simmons. Olshey would have to package McCollum together with a couple of draft picks, so this trade would certainly favor the 76ers, not the Trail Blazers. Multiple NBA analysts would argue that McCollum is the more dependable, clutch player right now. He averaged 23 points per game last season.

Next, the Toronto Raptors have the second-best odds (+250) of trading for Simmons. Power forward Pascal Siakim has been mentioned in trade rumor topics all across social media. Last season, he averaged 21.4 points, 7.2 rebounds and 4.5 assists in 56 games played. Once again, if Toronto trades Siakim and a first-round pick for Simmons, it sounds unappealing and downright dumb on their part. Siakim has proven his postseason-worth to the basketball world. In the 2020 first-round playoff series against the Brooklyn Nets, he averaged 20.8 points, 7.8 rebounds and 4.8 assists per game. Despite dropping to an average of nearly 15 points per game against the Boston Celtics in the 2020 conference semifinals, at least he averaged more than 10 points in a series these last few seasons. Simmons was shut down versus the Atlanta Hawks in the 2021 conference semifinals.

The Warriors now have the third-best odds (+300) of trading for the guard. On August 6, 2021, Stephen Curry signed a four-year, $215 million extension. Last season, Curry averaged 32 points, 5.5 rebounds and 5.8 assists per game in 63 games played. For free agents, the team signed Moses Moody, Nemanja Bjelica and Otto Porter Jr. this offseason. Yesterday, the signing of Andre Iguodala was made official; he signed a one-year contract. A couple of days ago, the team also signed Chris Chiozza to a two-way deal. Needless to say, the Warriors’ front office have made the necessary moves to transform this team back into old form.

Considering Klay Thompson tore his ACL again in November 2020, sidelining him for the rest of the 2020-21 season and part of this upcoming season, maybe Golden State could work something out for Simmons? The question is, who would they trade and would general manager Bob Myers and head coach Steve Kerr give up a first-round pick? It is not like the Warriors are a bad team talent-wise. They might not play as clean as their 2018-19 season championship team, but if Thompson can stay healthy after he returns from his ACL injury, they could return as a top contender in the Western Conference again. All things considered, Portland has the highest odds for the most logical reason: someone in their front office could be bluffing. Portland GM Elton Brand could give Simmons a chance with new head coach Chauncey Billups.