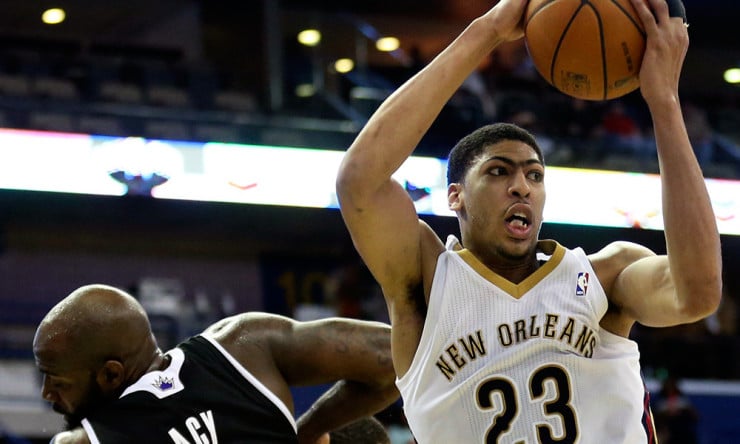 People who play fantasy basketball know that Kevin Durant is, without question, the best player in the game today. Nobody else is so well-rounded and so dominant in so many categories, even though as recently as a year ago there was a real debate over whether he or LeBron James should be drafted with the top selection in fantasy drafts.

Not that James had a bad year last season; it’s just that Durant pushed himself ahead. In some ways, New Orleans Pelicans forward Anthony Davis did, too.

Now entering his third year, Davis has made it clear that, for the first time in a long time, the top three picks in this year’s draft will carry massive value rather than just the top two. In fact, there’s even a pretty convincing argument that Davis should be the second pick of your fantasy basketball draft instead of James.

Of course, it all depends on what your draft strategy will be. Each player has pretty distinct advantages in certain categories, as you can see:

Davis is better in rebounds, blocks, free throw percentage and turnovers, while James is better in points, assists, field goal percentage and threes (steals were sort of a wash, at least last year). If you’ve got keepers and know where you’ll have some strengths, that could answer the question right away as to whom you should draft. If you’re starting from scratch, however, the choice can be a little daunting.

Here’s a look at why Davis should be the pick:

1. James could see a drop in usage rate – James was fifth in the league last year in usage rate (29.1), which is what fantasy players want to see from their first-round picks, especially when they’re as efficient as James. However, James will now be sharing the rock with two other players who were in the top nine in usage last season, and at this point it’s hard to predict how this new Big Three will work together on the offensive end of the floor. It’s not insane to think James could see a drop in points and/or assists for this reason alone. Also, playing alongside the best rebounder in the NBA, his boards could potentially see a dip, as well. On a brand new team, James just is not as known a commodity as Davis or Durant. He’ll be worth a top three pick, obviously, but there’s plenty of reason to believe Davis is safer at No. 2.

2. Davis’s age suggests a jump is still possible – At only 21 years old, Davis is doing some ridiculous things statistically. Last season he averaged 20.8. PPG, 10.0 RPG and 2.8 BPG in just his second year in the league. James, coincidentally, had his best statistical season in his own third year, when he was also 21 years old, and it’s not uncommon for players to settle into their statistical groove right around this time. That doesn’t mean, however, that Davis won’t get better. Durant continues to do so at age 26, and even he could do more if he wanted to. It’s not often that players as young as Davis are this good this early, and while James offers the same high floor, he doesn’t quite offer the same statistical ceiling.

3. James’ playoff schedule is weak (and he might play less) – One of the more challenging aspects of fantasy basketball is squeezing as many games worth of good players into a week of head-to-head as possible. Knowing that, it’s worth noting that the Cavaliers don’t play a week of four games after the week of March 16, 2015, and in fact they even have one playoff week (March 30, 2015) in which they play only two games—the only team in the league for which that is the case. To make matters even worse, new head coach David Blatt has said that he could see wanting to rest James more than usual to ensure that he is healthy for the postseason. If the Cavs have run away with the top seed in the East by the last week or two, there’s a strong chance James’ minutes will take a hit. Meanwhile Davis, playing for a team likely to be fighting for a playoff spot in the much tougher Western Conference, will be playing as many minutes as he can stomach.

In all reality, either player could serve as the cornerstone of a championship team, but there are enough reasons in the “Anthony Davis” column to justify taking him with the second pick overall ahead of LeBron James.

It probably won’t be too much longer before we start talking about him as the No. 1 overall pick, either