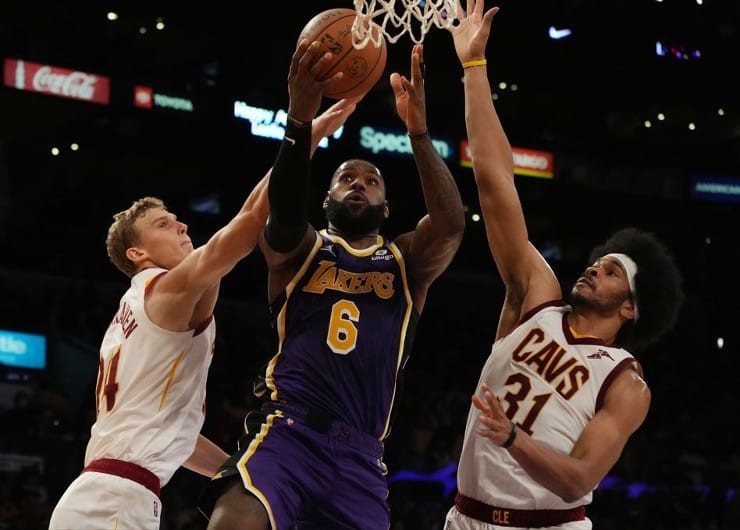 The Cleveland Cavaliers traded Lauri Markkanen, Collin Sexton, Ochai Agbaji, three unprotected first-round draft picks (2025, 2027, and 2029), and two pick swaps (2026 and 2028) to the Utah Jazz for Donovan Mitchell, so could LeBron James return to Cleveland in the coming years?

Let’s say if the Los Angeles Lakers have another disappointing season with James, Anthony Davis, and Russell Westbrook. Would G.M. Rob Pelinka ever consider trading James? After all, Bron cares about winning.

According to Cavaliers reporter Chris Fedor, this trick play is tucked away in the books, but it’s still a possibility. “I think they’d be open to it on their own terms, under the right terms,” explained Fedor.

“Terms that are very different from the ones he came back to in 2014,” continued Fedor. “When you acquire LeBron, there are a lot of things that go with that. He wants power and to help make decisions over the roster and people that are hired within the organization.”

“He wants to be at the center of everything and have a team built around his strengths and things along those lines. The Cavaliers would not sign up for that kind of situation.”

“They feel good about what they have here, especially with the addition of Donovan Mitchell. Back in 2014, they needed a savior and needed LeBron to come back and take them to a different level.”

After Donovan Mitchell trade, could LeBron James return to Cavaliers?

In mid-August, the four-time MVP signed a two-year, $97.1 million contract extension with the Lakers. However, he has the option to opt out for the 2024-25 season.

LeBron signed this particular extension because he might opt out in the future if another team drafts Bronny, his soon-to-be 18-year-old son. James has been vocal about playing with his sons in the NBA.

Even with Mitchell, Darius Garland, and Jarrett Allen, this Cavaliers trade is likely not enough to get the team back to the NBA Finals. James could be the missing piece. It’s not like he’s retiring anytime soon. The 18-time All-Star wants to play into his 40s.

Besides the Miami Heat, the only other team fans could see James playing for again is the Cleveland Cavaliers. Though, the salary cap is one significant factor.

Of course, James’ $97.1 million contract has the potential to increase to as much as $111 million, if the salary cap for the 2023-24 season rises to a considerably larger amount. He’s the highest-paid NBA player of all time.

While the Cavs are without their 2025, 2027, and 2029 first-round draft picks, the front office will find a way to make a blockbuster trade work if James is interested in returning to Cleveland. The Mitchell trade might not be the best long-term solution.

If the Lakers cannot land LeBron’s sons in the future, he would want to play for a playoff contender that would keep his family together. Perhaps the Los Angeles Clippers are another option, if Bronny and Bryce want to remain in the City of Angels.

Sure, it’s mindless speculation, but these rumors are still fun to discuss.