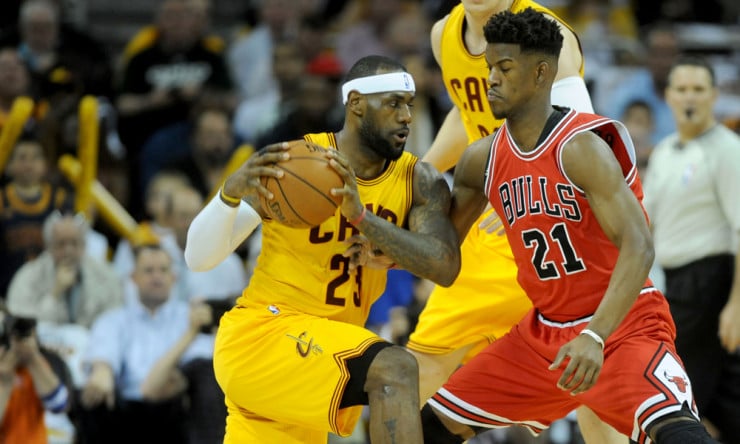 Game 4 was the proverbial tooth for a tooth, courtesy of LeBron James, but how else could that weekend of buzzer-beaters have ended?

However, that game was about more than a game-winning shot, as the Cavaliers had to scratch and claw for a win in one of the uglier contests of the postseason. James himself had another big game, but he also was responsible for eight of the team’s 15 turnovers and the Cavs experienced a couple of offensive dry spells that would have buried them had they not been playing a Bulls team that has been equally inconsistent.

From a game plan perspective, Cleveland saw a lot of success guarding Derrick Rose with Iman Shumpert and James himself, and while Rose still poured in 31 points, the extra defensive attention really threw him off of his game for a lot of the fourth quarter. Tristan Thompson only had a single offensive rebound, but he really frustrated Taj Gibson and Joakim Noah and drew a number of fouls on each. Also, J.R. Smith has added a nice dimension offensively, and that will be important if Kyrie Irving (11.5 PPG over the last two games) continues to struggle.

It was ugly, but they did enough to win. Now that they’re going home, they’ll put the crowd behind them as they try to take a pivotal Game 5 that, historically, decides the series.

Chicago has plenty to gripe about in regards to the end of Game 4 – the missed David Blatt timeout call, then the extra “timeout” they were given anyway while the refs checked the clock. But LeBron hit the game-winning shot, which was much less lucky than Rose’s two nights ago.

Frankly, the Bulls could have put the game away a couple of times, but they went absolutely ice cold in both the second and fourth quarter. For a while in the second, they gave up a 16-0 run to the Cavaliers and failed to score a field goal in seven minutes. An eight-point lead turned into an eight-point deficit, and that sort of inconsistency is what has plagued this team all season.

Chicago kept Thompson off the offensive boards and played really well defensively for big stretches, but they shot way fewer free throws than Cleveland (12 to 24) and couldn’t hit any of those dagger buckets when it would have mattered most. They’ll need to fix both of those problems in Game 5.

Rose hit a couple of great shots in the game’s waning moments, but he disintegrated in the fourth quarter before the final few minutes, and they really could have used some extra buckets in there. In Game 5, Chicago has to ramp up the defense and find ways to avoid the offensive droughts that killed them on Game 4. It was a painful loss, but the loss was their own fault. They had Cleveland on the ropes, and they blew a reasonable opportunity to win. Now, it goes back to Cleveland for two of the final three games of the series. The odds are not with the Bulls.

Cleveland has all of the momentum, and since this series has to go seven games, it makes sense that the Cavaliers win Game 5 to give Chicago a shot to win Game 6 at home. A series this tight seems destined for a deciding Game 7. A slow, ugly, close Game 7.