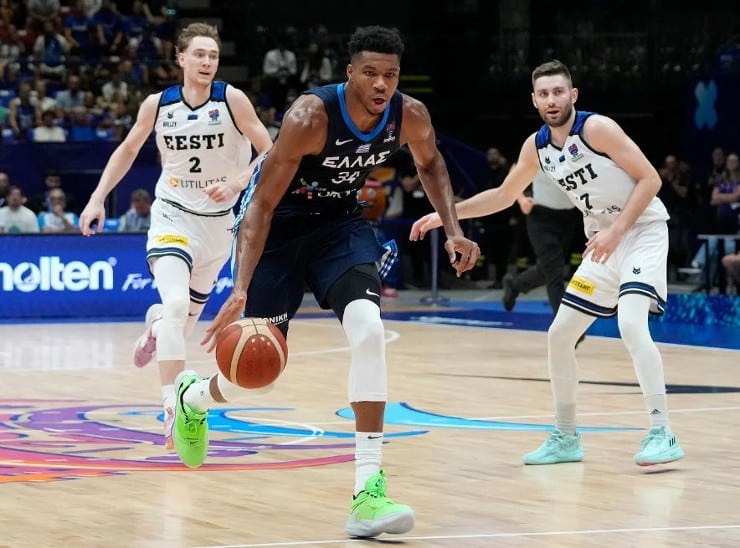 On Thursday, Milwaukee Bucks forward Giannis Antetokounmpo tweaked his ankle at EuroBasket in Greece’s 90-69 win over Estonia. The Greek Freak finished his performance with 25 points, 5 rebounds, and 4 assists.

Eric Nehm of The Athletic watched the play live. “The broadcast just showed the play where Giannis Antetokounmpo got hurt,” explains Nehm.

“Looked like a slight tweak of the right ankle. Seems like they shut him down for the rest of the game to avoid risking further injury.”

🇬🇷 Giannis Antetokounmpo visibly limping as he goes to the fans after the game 😬 #EuroBasket pic.twitter.com/9G38RML2K6

According to Dionysis Aravantinos of HoopsHype, the six-time NBA All-Star suffered a slight ankle sprain. His condition will be monitored by the medical staff.

After the win, Basket News filmed Giannis Antetokounmpo limping around fans outside the arena. He seemed well enough to sign autographs.

Greece’s national team coach Dimitris Itoudis was later asked about Antetokounmpo’s ankle injury and why he left the game. Itoudis replied, “What do you mean? He wasn’t going to play anymore, so he was going through his usual recovery routine.”

“Giannis would not be back in the game, so he got iced as he normally does behind closed doors, only now it was in public. It’s all good.”

In Greece’s 99-79 win over the Ukraine on Tuesday, Antetokounmpo scored an international career-high 41 points for his team. At the time, he became only the second player in the 21st century to score at least 40 points in a EuroBasket game.

Then, Dallas Mavericks guard Luka Doncic put up 47 points against France on Wednesday. Slovenia defeated them 88-82, advancing to the knockout round.

Dirk Nowitzki also scored 43 points against Spain in 2001. Not to mention, Giannis Antetokounmpo is the third Greek player ever to have scored more than 40 points in a EuroBasket game.

For another interesting statistic, the two-time Finals MVP is averaging 1.11 points per minute at the EuroBasket. So far, his performances have been legendary.

On March 2, 1962, in the Philadelphia Warriors’ 169-147 win over the New York Knicks, Wilt Chamberlain scored 100 points. Chamberlain averaged 1.04 points per minute in that game.

For the knockout stage, Greece is scheduled to play the Czech Republic in the Round of 16 on Sunday. Greece finished 5-0 in group play.