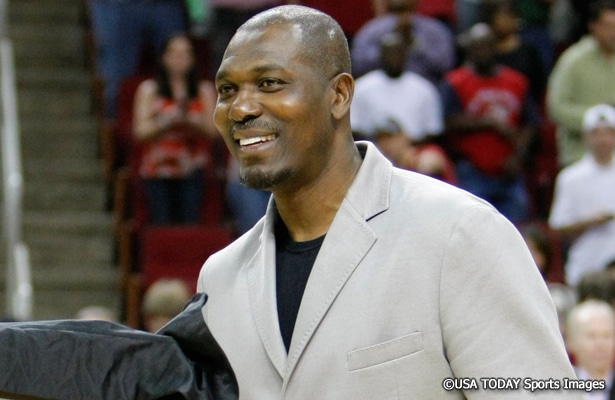 One of basketball’s greatests, Hakeem Olajuwon, believes that Nikola Jokić is the only big man that truly reminds him of the NBA back in the day. Naturally, the legend compared the Serbian with Joel Embiid to further explain his opinion.

You guys know how it is, when legend’s of the game get to talking we are all ears. Most of the time, they are spot on, but sometimes we should simply agree to disagree with respect. In this case, Olajuwon is an expert and deserves to be listened. We are talking about one of the best post players in all NBA history, and two-time title champion and the 1994’s league MVP who’s dedicated his life as a retired basketball player to mentor young athletes.

So what I mean is, when it comes to talking about center position on court, let’s at least hear what the expert has to say! Sports Illustrated just released an interview where Olajuwon was as sincere as could be. “The traditional big-man game is boring! I didn’t want to play center. I wanted to handle the ball like the guards,” Hakeem said.

Jokić on the other hand deserves all the praise, as the two-time league MVP can prove he can do it all from center position and is breaking records by the day.

“He’s playing the game, and you think he’s not serious, but he’s so effective,” Olajuwon told. “He doesn’t look strong, but I see he gets such a deep post position. I think maybe it’s the mismatch, but then he does the same thing against bigger guys. His shot, his fakes, they are very difficult to time. You don’t know when he’s faking and when it’s real. He has tricks!”

Olajuwon finally ended his statement with a bold “He’s the one.” Just this week, the Denver’s big man passed the franchise legend Alex English as the player with most career assists in Nuggets’ history, as you can see in the YouTube link below:

Due to their position on court, Joel Embiid is oftenly compared to the Serbian center. Although fans all over the world shared their soreness over the fact that Embiid didn’t win last year’s MVP throphy, Olajuwon pointed out what he believes is the 76ers star’s biggest weakness.

“He’s got all the moves, but leveraging the moves is different. Why would he be shooting threes? He has the advantage every night, and if I have the advantage, I’m going to wear you out. That’s settling! When I’m tired, I settle,” Olajuwon explained. “You don’t settle when you’re trying to win. You don’t start the game settling!”

Later on in the interview, Olajuwon admits that things have changed and the ”old school” way of playing is simply not as appealing nowadays.

It wasn’t too long until the Philadelphia big man heard what the Olajuwon had to say about him. And the internet is so fast that not even a day has gone by and Twitter already delivered us the French’s response:

The MVP race is on again as Philadelphia’s center just jumped from No.5 to No.3! The Nuggets’ star is still firmly positioned as No.1, but now more than ever both Luka Dončić and Embiid are trailing close by. Some of our favorite sport betting sites consider the 76ers player to be fourth on the ladder to win the race.

Who do you believe will be the new league’s MVP?