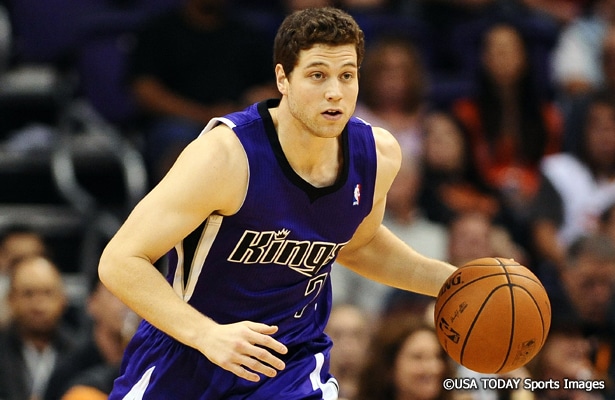 The Sacramento Kings are nearing a buyout with Jimmer Fredette, who was making $2,439,840 this season in the last year of his contract. If he clears waivers, he’ll be an unrestricted free agent.

It wasn’t long ago that Fredette was an NCAA superstar and household name. During his senior year at BYU, Fredette’s games were must-watch TV as he averaged 28.9 points while shooting 45 percent from the field and 40 percent three-point range.

He returned BYU to relevancy and, in the process, became a star. Before long, he was being mentioned in rap tracks by Lil Wayne (“I got a chopper and a trimmer shootin’ like Jimmer”) and spawning tribute songs all about him (“Teach Me How to Jimmer” has received millions of views on YouTube). Many people purchased his college jersey and “Jimmered” entered the national lexicon, when Fredette would light up a team or when a shooter in a random park would knock down a shot in his defender’s eye.

In the 2011 NBA Draft, Fredette was selected 10th overall and traded to the Kings. At the time, Sacramento’s decision-makers were split on whether to draft Fredette. Most people in the front office felt that he was overrated and that his game wouldn’t translate to the NBA, which was hard to disagree with since he isn’t very athletic, struggles mightily on the defensive end and needed the ball in his hands to thrive at BYU. However, at the time, the Kings were desperate to sell tickets and excite fans, so they selected Fredette. The Kings got what they wanted, parading Jimmer out in front of fans as much as possible. He made appearances across the city, from the Kings’ facility to packed shopping malls.

However, once Fredette took the court, there wasn’t much for the fans to be excited about.

Fredette’s first three seasons in the NBA have been disappointing, to say the least. He has started just seven games. As a rookie, he averaged 7.6 points, 1.8 assists, 1.2 rebounds and .5 steals, all of which remain career-highs since his stats have dropped each year he has been in the league. This year, prior to the buyout, Fredette was averaging 5.9 points, 1.5 assists, 1.1 rebounds and .3 steals through 41 games.

Fredette played for three different head coaches – Paul Westphal, Keith Smart and Mike Malone – in three seasons and he wasn’t able to contribute in a significant way under any of them.

With that said, executives believe that Fredette still has plenty of time to prove himself. After all, he just turned 25 years old. Even if he doesn’t become a starter in the NBA, it’s possible that he could carve out a sixth man role that allows him to create instant offense off of the bench. Also, it is worth noting that this is actually Fredette’s best season by per 36 standards, averaging 18.7 points, 4.7 assists, 3.5 rebounds and 1.1 steals when adjusted. One executive commented that Fredette has played relatively well when given playing time and said that he could see him becoming more of an impact player if given the minutes.

It also helps that Fredette has shown flashes throughout his career, most recently two weeks ago against the New York Knicks when he had 24 points in 27 minutes on 9-14 shooting from the field and 6-8 from three-point range. It was a career-high for Fredette and it came at a good time.

So why are the Kings buying him out now? Well, the team tried to trade him before the Feb. 20 deadline, engaging in serious talks with the Denver Nuggets and preliminary talks with others. But at the end of the day, the Kings weren’t able to land an asset for Fredette. Had the Kings held onto Fredette for the remainder of the year, he’d likely walk as an unrestricted free agent this summer. Rather than forcing him to wait out the rest of the season in a limited role on a losing team, the Kings decided to let him go now so that he has an opportunity to prove himself before hitting the market. Agents really appreciate – and remember – that kind of gesture and it only helps create a player-friendly reputation for the front office.

This also allows the Kings to add a player with that open roster spot. They can sign a free agent or they can audition a number of D-League players to try to find someone who can help them down the road. It’s not uncommon for a team to offer a D-League player a guaranteed contract for the remainder of the season, along with one or two team option years. Both sides are happy because the player gets a chance to show what he can do in the NBA and the team gets to lock up the player’s rights for multiple years.

It remains to be seen where Fredette will land next. The Nuggets may have some interest after trying to trade for him, and the New York Knicks have been mentioned as a potential landing spot since they have two open roster spots. The Utah Jazz are an obvious fit since he was a fan favorite at BYU and he would fit in with the Jazz’s young team (while generating some fan interest). However, Utah has 15 players on their roster and reportedly haven’t discussed bringing in Fredette.

Some team will sign the guard, and he’ll have a shot at salvaging his career. He may never be as productive and famous as he was during his final season at BYU, but it’s still possible for him to have long career in the NBA if he works hard and finds his niche.

Understanding What Happened to Raymond Felton

There are a lot of questions surrounding the future of New York Knicks guard Raymond Felton in light of his recent legal trouble. Michael McCann, a Massachusetts attorney and the founding director of the Sports and Entertainment Law Institute at the University of New Hampshire School of Law, mapped out the situation for Sports Illustrated and addressed some of the key concepts.

What did Felton do wrong?

“Raymond Felton has been charged with three offenses under New York law for unlawful possession of a firearm. The most serious is second-degree criminal possession, a felony charge that carries a minimum sentence of three and a half years behind bars. Felton’s charges stem from his estranged wife, Ariane Raymondo-Felton, reportedly handing over a Belgian pistol (FNH 5.7×28 mm) to New York police and claiming it belonged to Felton. Raymondo-Felton’s decision to turn over the gun appears connected to a heated argument Felton may have had with his girlfriend, whose name has not been released by law enforcement.”

Will he go to jail?

“Unfortunately for Felton, New York is probably the worst state to be charged with illegal possession of guns. Prosecutors do not need to establish how Felton obtained the gun or why he possessed the gun, only that he possessed the gun. Felton has thus been charged with a strict liability offense: if he possessed the gun, he’s guilty and a judge would sentence him to at least three and a half years behind bars. Felton could seek a plea deal in hopes of a lesser sentence. Former NFL star Plaxico Burress, who faced similar charges in New York, ultimately pleaded guilty to lesser charges, but it was far from a legal win for Burress. Burress spent nearly two years behind bars.”

Can he say the gun wasn’t his?

“A legal defense that could work for Felton is that he did not possess this gun. In order to gain a conviction, prosecutors must establish, beyond a reasonable doubt, that Felton actually possessed the Belgian pistol. This point reveals a crucial difference in evidence between the incidents involving Burress and Felton. While Burress had no logical way of arguing he didn’t possess a gun used to shoot himself, Felton’s connections to the Belgian pistol are less obvious. As of now, the only reported link between Felton and this pistol is that his estranged wife handed the pistol over to law enforcement and claimed it belonged to Felton. If that remains the only link, watch for Felton to portray his estranged wife as unreliable and, given their pending divorced, biased. He may raise similar themes about his alleged girlfriend if she testifies against him.”

Can he still play for the Knicks?

“An immediate challenge for Felton is whether he can travel with the Knicks and leave the state of New York while facing the charges. As part of the bail process, Felton will have to convince a judge that he is not a flight risk or a danger to the public, and that he needs to travel with the Knicks in order to fulfill his employment contract.

Of even greater concern to Felton is whether he will face an NBA suspension. … New commissioner Adam Silver will face his first major disciplinary decision with Felton. Like Stern, Silver is an attorney and he will likely scrutinize the charges and available evidence before making a decision. Silver will also rely on the counsel of Rick Buchanan, the league’s general counsel and executive vice president. Silver and Buchanan undoubtedly know that the league’s image is tarnished with fans, media and lawmakers when players are connected to guns. On the other hand, they do not want to punish a player who may ultimately be cleared of any wrongdoing. This is a crucial point for Felton as he considers his legal options: if he pleads guilty to any crime, the NBA would be clearly justified in suspending him.”

Can the Knicks void his contract?

“Felton’s greatest worry may be whether the Knicks will use these charges as grounds to void his contract. Felton’s contract calls for him to earn $3.6 million this season, $3.7 million next season and a player option for $4.0 million in 2015-16. Felton is averaging a career-low 10.3 points and his play has drawn much criticism this season, with the gun charges only further hurting his standing with Knicks officials. It stands to reason the Knicks may be interested in severing ties with their point guard all together.

The Knicks could try to terminate Felton’s contract under Clause 16 of the NBA’s Uniform Player Contract. In theory, this clause allows NBA teams to void a contract if a player, “fails, refuses, or neglects to conform his personal conduct to standards of good citizenship, good moral character (defined here to mean not engaging in acts of moral turpitude, whether or not such acts would constitute a crime), and good sportsmanship…” The Knicks would have to first place Felton on waivers. Assuming he clears waivers — a safe bet — the Knicks would then notify Felton that his contract has been voided. To be sure, the Knicks’ legal argument for terminating Felton’s contract would be strengthened if Felton is convicted or if he pleads guilty.

In reality, the Knicks would be inviting a legal fight if they tried to void Felton’s contract. Any attempt would be met with a grievance filed by the players’ association to a neutral arbitrator.”

Be sure to read the entire article on Sports Illustrated by clicking here.