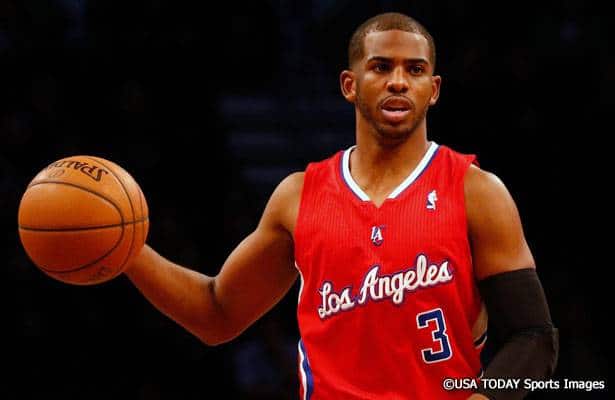 Chris Paul’s return to the lineup may be imminent.

After missing the past 18 games, Paul is expected to play Sunday against the Philadelphia 76ers, according to Head Coach Doc Rivers.

Prior to the Clippers practice Saturday, Rivers said there was a “50-50” chance Paul would suit up against Philadelphia, but following the workout he re-assessed the situation.

“He looked great [in practice],” Rivers said. “We plan on playing him.”

The Clippers (35-18) have two more games before the All-Star break and Rivers preferred to have Paul available for both of them.

via Eric Patten of Clippers.com

The Clippers play the Philadelphia 76ers on Sunday and it’s sounding like Paul is going to play.

L.A. was 12-6 in the games without Paul. Darren Collison stepped in as the team’s starting point guard and played very well, but it was Blake Griffin and Jamal Crawford that carried the team over the 18 games.

The Clippers will have to make some adjustments, but they’re obviously a much better team when Paul is on the floor.

Chris Kaman Fine With Being Traded?

After receiving consistent playing time in all three games of the Los Angeles Lakers’ 2-1 trip, Chris Kaman admitted that it was the first time he had fun playing basketball in a long time.

But he also admitted that if he doesn’t make it past the upcoming Feb. 20 trade deadline and finish out the season as a Laker, it won’t faze him.

“I don’t care, I honestly don’t care,” Kaman said when asked if he has thought about the possibility of the Lakers trading him. “It’s not something that I want to do, but it’s not going to make me go to sleep at night and have to stay awake all night tossing and turning thinking about it. I don’t care. If they want to trade somebody, trade me, trade the next guy, it don’t bother me. It’s part of the business. The sooner that you realize it’s a part of the business, the better off you’re going to be. Just let it roll and let it happen. I’m not going to try to stop anything.”

via Dave McMenamin of ESPNLosAngeles.com

Kaman made similar comments to Basketball Insiders during an in-depth interview for our Trade Deadline Guide, which will be on sale soon (Apple users, Android users).

Early in his career, he was affected by trade rumors and took them personally, but over the years he has learned that trades are out of his control and that the NBA is a business.

He actually might welcome a trade from the Lakers, considering the team has struggled all season and he has fallen out of Mike D’Antoni’s rotation at times. The Lakers are currently 18-32, and could decide to part ways with Kaman’s $3,183,000 expiring contract.

This season, the veteran center has averaged 8.7 points, 5.3 rebounds and a block while playing 17 minutes a night.

“I wouldn’t say it was a mistake [in 2011] because it was a great experience, but it’s something I would never do again,” said Griffin, who won the dunk contest that year. “For me, All-Star Weekend is about getting a chance to rest as much as anything. With the All-Star Game alone you still have obligations almost all day Friday and you have some kind of an event Friday night and Saturday’s practice and appearances. Saturday night for me now has become the time where I hang out with my family and hang out with my friends and take it easy.”

via Arash Markazi of ESPNLosAngeles.com

This isn’t that surprising. Many other players who have competed in the dunk contest and went onto make the All-Star Game have said the same thing.

Fans don’t realize how crazy that weekend is for players. There are so many appearances that All-Stars have to make, that it becomes very difficult for a player to add in all of the obligations that come with doing the dunk contest as well.

Also, at this point, what does Griffin have to gain from doing the dunk contest since he has already won it before?

This year, the dunk contest will feature three All-Stars for the first time since 1988, since Paul George, John Wall and Damian Lillard have decided to compete.