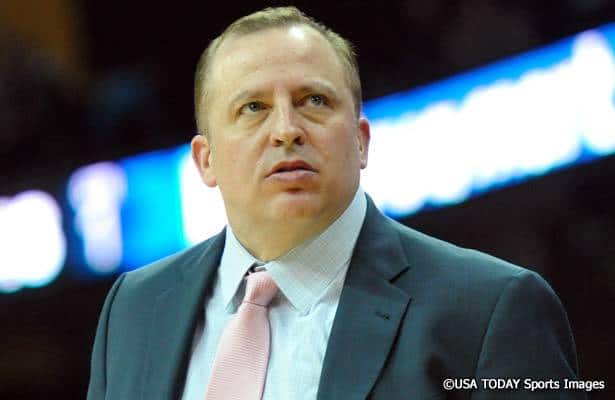 The Bulls were certainly newsworthy in the first half of the season, losing a former MVP to a second major knee injury in two years and trading the other team captain away to a division rival, but there’s still plenty of Bulls news to be divulged before the end of the year.

Here are six news nuggets to consider as we enter the second half of the 2013-14 campaign:

#1 – Tom Thibodeau’s issues with the Chicago front office are real.

While the Tom Thibodeau has personally denied Mitch Lawrence’s report for the New York Times that Thibs was almost certainly headed to the New York Knicks at season’s end, it wasn’t a rumor grounded completely in fiction. Despite the fact that Thibodeau isn’t even halfway through the first year of a four-year extension, the rumblings about beef between him and the team’s front office aren’t unfounded. He certainly wasn’t happy when the decision was made to let assistant coach Ron Adams walk this past summer, and his disappointment over losing Luol Deng hasn’t been a very well-kept secret, either.

On the other end of things, John Paxson and Gar Forman have to be tired of seeing their best players toward the top of the minutes-per-game leaderboard every year. Also, despite the fact that everyone within the organization has said they aren’t tanking in the wake of the Deng deal, Thibodeau really isn’t giving them any opportunities to sniff at this lauded 2014 draft class. No matter who’s playing for him, he wins games, which is why he should be someone the higher-ups within the organization should value more than they apparently do.

Whatever the real story is here, there is some discord between Thibs and the Bulls. Hopefully a successful season next year can help everyone bury the hatchet and get on with moving in the right direction.

#2 – Even without Luol Deng, this team is still too good to miss the playoffs.

Since Deng was traded, Chicago is 4-1 and just barely under .500, which at press time makes them the sixth best team in the dismal Eastern Conference, only 1.5 games back of the three-seed. As mentioned above, Thibodeau refuses to back down no matter his clientele, and the Bulls are still one of the conference’s better defensive teams despite their subtractions. There are some Chicago fans that would rather see these guys get a lottery pick in this lost season than make the playoffs, but that’s not going to happen. With Joakim Noah, Carlos Boozer, Taj Gibson and Jimmy Butler, these guys are still better than the swill in the bottom half of the conference.

#3 – Derrick Rose is off crutches, but still out for the season (as far as we know).

Rose traveled with the team to Orlando for Wednesday night’s game, which was something he hadn’t done since injuring his knee only 10 games into the season, and he did so off crutches and walking on his own for the first time since the surgery. It’s a good sign with still plenty of season left to go, but it doesn’t necessarily mean he’ll be back before year’s end.

The team announced that he’d be out all season (including playoffs) to rehab from his surgery, but there really wasn’t any other way to phrase it after the PR nightmare they and Rose experienced last year with the constant will-he-or-won’t-he stuff that played in the media from March through the Eastern Conference Semis. Perhaps this “out all year” diagnosis will work the way pizza delivery does; they tell you it’ll be there in 45 minutes so you’re pleasantly surprised when it shows up in 30. Rose himself won’t rule out a postseason return. That’s going to be a wait-and-see kind of thing, though, and for now, it’s best just to assume that the next time we see Rose play will be the 2014-15 season. If that changes, we can all be pleasantly surprised together.

#4 – Enjoy your last few months of the Carlos Boozer Show in Chicago.

All the animosity over Carlos Boozer really is unfair. The guy has, more or less, put up the sorts of numbers that were expected of him when he signed his contract back in 2010, but he gets flak for not being a true second star alongside Rose during his tenure here. He’s a great guy and a beloved member of the Chicago locker room, however—someone who has been much more a vocal leader than people realize.

Despite all of that, it finally makes financial sense for the Bulls to use the amnesty provision on him this summer. Trading away Luol Deng signals the harsh reality that the Bulls are moving on from the core they started building in that summer of 2010. The Bench Mob is long gone, Luol is now gone, too, and Boozer is really the only older veteran on the roster still making loads of money. It’s time to free up that money and that roster spot.

#5 – Nikola Mirotic is no sure thing for the Bulls next season.

…And why not use some of that money and that roster spot to bring in Spanish League MVP Nikola Mirotic, a second-round draft steal from a few years ago that Chicago has long considered one of their strongest future assets? The problem, however, is that Forman and Paxson might not be able to get him over here this summer, as fans have long assumed they would be able to do.

The biggest issue here is that Chicago can only pay $600,000 of Mirotic’s $3.4 million buyout, and if all Chicago gives him is their mid-level exception, Mirotic would actually be taking a pay cut to come play in the States. Paying him more than the MLE eats into the cap space Chicago would hope to have should they actually follow through with the Boozer cut, and while a player of Mirotic’s talent is probably worth it, the questions is will the Bulls gamble and pay him whatever they have to pay him to move him to Illinois?

#6 – Chicago does not have enough cap space to sign a max free agent this summer.

If the Bulls do decide to wait on bringing over Mirotic, and if they do use the amnesty provision on Boozer, they’ll have somewhere between $13 million and $14 million to spend on free agents this summer. A lot has been made about Chicago pursuing someone like Carmelo Anthony, who could opt for testing free agency, but unless he’s willing to take about half of what he’s actually worth, that isn’t going to happen with the Bulls. Chicago with money to spend is a good thing because they will clearly need some fresh faces next year, but a max or near-max player simply is not going to be the answer when free agency gets under way in July. The money isn’t there.

A lot of this will have to wait until the offseason to see what comes to fruition, but one thing’s for sure: there’s no shortage of newsworthy things going on in the Windy City right now.