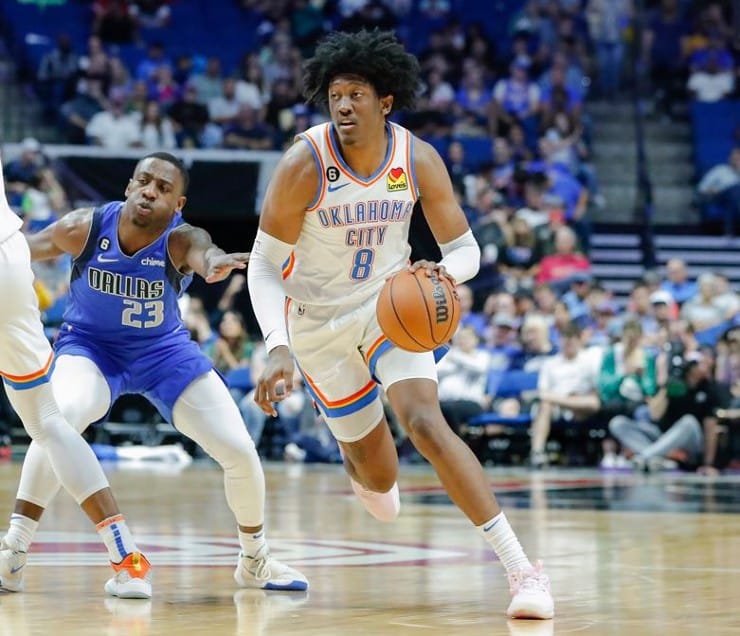 Oklahoma City Thunder rookie guard Jalen Williams has undergone surgery to repair an orbital bone fracture he sustained in the opening-night matchup against the Minnesota Timberwolves.

During the second quarter of the Thunder’s 115-108 road loss, the rookie was elbowed in the face while attempting to defend a dunk attempt by Jaden McDaniels. Williams was helped off the court by the medical staff.

A few NBA betting sites are giving the Thunder the fourth-lowest odds to win the championship in 2023. However, some sportsbooks are not ruling out a playoff appearance this season.

The Santa Clara University product did not return. In six minutes played, the guard ended his NBA debut with 5 points and 1 assist. He shot 2-of-2 (100%) from the floor and made a basket from 3-point range.

Williams was selected 12th overall by the Thunder in this year’s draft. His orbital bone fracture will be re-evaluated in 7-10 days. For the next few months, Williams will probably wear a face mask once he receives clearance to play.

According to Oklahoma City’s injury report, Williams is listed out indefinitely. The guard could return on Tuesday, Nov. 1, when the Thunder play the Orlando Magic.

In the meantime, Williams will miss road matchups against the Denver Nuggets and Dallas Mavericks. Plus, he will miss upcoming home games versus the Timberwolves and Los Angeles Clippers.

Of course, during the preseason, the Thunder guard averaged 14.4 points, 3 rebounds, 5.2 assists, and 1.8 steals in five games. He led the rookie class in assists.

Through 84 career appearances in the NCAA, the Arizona native logged 12.6 points, 3.7 boards, 2.9 assists, and 1.2 steals per game with Santa Clara.

The guard was then named to the All-WCC First Team.

When he can return to the court, Jalen Williams will help bolster the Thunder’s backcourt. Evident by his NCAA statistics, the guard is more than capable of playing at a high level when healthy.