Fights in basketball are a common occurrence in the NBA today. However, when they are between players on the same team, that becomes more of a rare sight. They usually take place behind closed doors, away from the eye of the common fan, but they can get rough.

Just recently, the fight between Draymond Green and Jordan Poole of the Golden State Warriors has dominated NBA headlines. And with Green taking a leave of absence from the team, the fight has left his future with the team up in the air. But there’s more to revisit in NBA history. 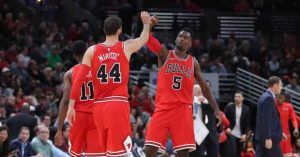 Going into the 2017-18 season, Portis and Mirotic were competing for the Chicago Bulls’ starting power forward spot. The competition had been getting heated throughout camp, as the two forwards have been competing for playing time for years. Things reached a boiling point on October 17th, when Mirotic charged at Portis twice before Portis punched him in the face. Mirotic was left with facial fractures and a concussion, leaving him out for the first 23 games of the season, and Portis getting suspended for the first 8.

As a result of the fight, Mirotic was traded to New Orleans less than a year later. While Portis apologized publicly and privately, their relationship off the court never recovered.

Portis looking back on Mirotic altercation: “I’m sorry for what happened. We tried to be professional, make things work on the court. We did that. Off the court, we never talked. We played cards (on the plane) one time. It was kind of awkward. So we didn’t play anymore.” Widely considered one of the greatest duos of all time, the issues between Kobe and Shaq are well-documented. While they won multiple championships together with the Lakers, they were also in the middle of a years-long feud. Ultimately, the feud led to O’Neal wanting a trade, when he was traded to Miami.

Years after their retirements, the two recounted an instance where punches were thrown during their 1-on-1 interview in 2018.

“We were playing a pickup game during the lockout season,” Bryant recalled. “It was trash talking and I look around and I realized ‘he talking to me.’ I say, ‘there’s not going to be any more of that, and then the next thing I know, a big hand goes one way and I go the other way. I throw a [little punch] and then it was broken up.”

Bryant also spoke about the fight during his appearance on Jimmy Kimmel Live. I couldn’t reach him,” he said jokingly. “I might lose this fight, but you’ll know that I’m not going to back down.” Bryant also added that he and O’Neal continued their scrimmage after.

There was a lot of behind-the-scenes information given in the Last Dance documentary. One of them is a retelling of a fight between Michael Jordan and Steve Kerr in practice.

“I just haul off and hit him right in the f—ing eye. And Phil just throws me out of practice.”

“Phil [Jackson] senses my aggression, but he’s trying to tone me down by calling these ticky-tack fouls,” Jordan said. “Next time he does it, I haul off on Steve Kerr. When I foul him, I say ‘now that’s a f—–g foul.'”

In the segment, Kerr mentions that while he has a lot of patience, he has moments where he snaps. Jordan adds that Kerr punched him in the chest before he retaliated with a punch to the eye before being thrown out of practice by head coach Phil Jackson. Tensions can arise very easily during the postseason. The 2014 Indiana Pacers were preparing for their first-round series against Atlanta when Evan Turner was separated from Lance Stephenson after a fistfight.

Then-Yahoo Sports reporter Adrian Wojnarowski reported that the altercation was a buildup of weeks of frustration leading up to the playoffs, along with players being frustrated with Stephenson’s temper. The Pacers squeezed by the Hawks in 7 games before being eliminated in the Eastern Conference Finals.

The 2022 season was a very frustrating one for Laker fans and players alike. Early in the season, there was a scuffle on the bench between star forward Anthony Davis and center Dwight Howard. Both players brushed it off in the postgame as not being a real problem.

“We squashed it right then and there,” Howard said. “We had a disagreement about something that was on the floor. We’re both very passionate about winning. We didn’t want to lose this game. … We’re grown men. Things happen, but we’ve already squashed it. There’s no issues.”

The most recent fight, and the inspiration for this article. The preseason has been eventful for the defending champion Golden State Warriors. The leaked video shows Green getting in Poole’s face and then throwing a punch when he gets pushed. Green has taken a leave of absence from the team and his future with the team has been a hot topic in NBA circles.

Green has added that his personal issues and mental state contributed to his actions and the reason for taking his leave of absence.

The Warriors are planning to discipline Green internally but no news of a suspension or fine has been reported.