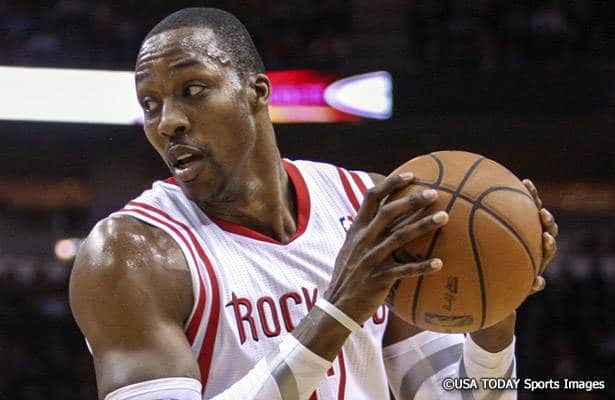 When the Houston Rockets won the Dwight Howard sweepstakes over the summer, the Rockets and their fans celebrated like they had just won a championship. Howard was heralded as the resurrected Hakeem Olajuwon, and the city practically began mapping out parade routes for the championships that Howard and fellow superstar James Harden were destined to bring to town.

Now, with the 2013-14 NBA season near its midpoint, there is one inescapable conclusion to be drawn about the Houston Rockets:

They are not contenders.

To start with, Rockets fans are starting to realize what long-time observers of the NBA already knew, that Dwight Howard is no Hakeem Olajuwon. For those too young to remember, Olajuwon was second only in NBA domination to Michael Jordan when they were both in their primes. Houston’s game plan was to bring the ball up the court, feed it to Olajuwon, and allow him to create the offense. He would either create points by eluding double- and triple-teams with his plethora of moves in the post, or he would suck those defenders away from the perimeter and then hand pick which lights-out three-point shooter he wanted to hit with a pass. Kenny Smith, Vernon Maxwell, Matt Bullard, Clyde Drexler, Sam Cassell and Mario Elie are just a few of the old school Rockets who owe their ring-bearer status to the brilliance of Olajuwon.

Howard is a completely different player. Rather than creating offense, Howard basically needs to have his offense created for him. He is one of the best finishers in the game, but only if he is put into a situation where finishing is all he has to do. He can rock the rim on a fast break, make the highlight reel with an alley-oop dunk and intimidate even the most confident penetrating guards on the defensive end, but creating his own offense is simply not Howard’s game. And of course, there’s the free throw dilemma. Howard is below his unimpressive career mark of 57.5 percent, shooting just 54.3 percent from the charity stripe. Olajuwon was consistently above 70 percent from the line, and even better in crunch time.

The second glaring issue derailing Houston’s championship aspirations is their lack of assists. On the season they manage just under 20 assists per game, ranking them in the bottom five across the NBA. Part of that has to do with ongoing injuries in the back court, where Jeremy Lin and Patrick Beverley have missed significant time, but part of it also has to do with the fact that they are allowing their shooting guard to handle the playmaking. Harden does put up impressive assist numbers on occasion, to be sure. The problem is that his assist-to-turnover ratio is among the worst in the league for players who start and handle the ball, and he’s well on his way to a career-worst year in turnovers at just under four per contest. The Rockets can win a lot of games with the shoot-first Harden running the offense, but they can’t win on an elite level.

Next, there’s the defensive end of the floor. Despite the addition of Howard, one of the league’s best shot-blockers and low-post defenders, the Rockets are sitting in the bottom third of the NBA in points allowed, consistently giving up in the neighborhood of 102 points per game. Part of that, too, is due to injury, as Omer Asik would be helping Howard patrol the paint is he weren’t slowed by a swelling knee. But since the Rockets are looking to deal Asik anyway, he’s not the long-term solution. The Rockets need better defense on the wings, and that’s only going to come with a personnel move. There are no great wing defenders on the roster.

Finally, there’s the question of the power forward position. At times Terrence Jones has looked like the answer for Houston, but at others he looks like he really needs to be the backup power forward. He’s shown moments of brilliance, and his leadership at summer league was impressive, but for him to be a championship-caliber player, he’s going to need time and development, two things the win-now Rockets are not in a position to wait for. Of course, if the Rockets had an elite playmaker setting the stage for Jones it might greatly accelerate his growth process, but unless one becomes available and can be had for what Houston’s offering, that’s an unlikely scenario.

On paper, the Houston Rockets look like a team that could compete for the top spot in the Western Conference, and indeed, at times they have held their own with the West’s elite. That said, over the course of the first half of the season we have seen some glaring weaknesses, and if those weaknesses go unaddressed between now and the trade deadline it could be another long offseason for Dwight Howard and his new team.