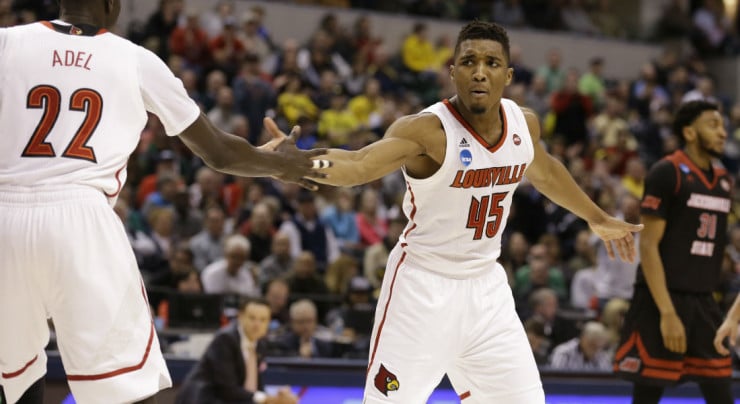 For the second consecutive year, a smart trade from GM Dennis Lindsey during the draft changed opinions for the Utah Jazz on the fly. After nabbing George Hill by giving up the 12th pick last year, Lindsey packaged 2015 draftee Trey Lyles and the 24th pick this season to Denver for the 13th pick (per The Vertical’s Adrian Wojnarowski), selecting Lousiville’s Donovan Mitchell.

Mitchell, a standout sophomore, is a prototypical Jazz pick who was likely targeted throughout the process. He’s only 6-foot-3, but boasts a gigantic 6-foot-10 wingspan and will fit perfectly in a system that prefers guards who can defend both the one and two spots. He’s a high-character player who showed a ton of enthusiasm about the culture the Jazz have cultivated during his pre-draft interview process, a template that fits right into Lindsey’s desire as a GM. He’s ultra-strong and athletic, and if Utah’s vaunted development staff can groom his decision-making and feel for the game in the right ways, he could be a two-way stud.

For the Nuggets, moving back 11 spots in the draft netted them Lyles, the 12th overall pick from 2015. Lyles disappointed in his second season in Utah, falling out of the rotation for long stretches and failing to develop in several key areas. He’s struggled both as a shooter and defensively, with little feel for the game. A fresh look in Denver could offer him a chance to reclaim a lot of his stretch potential as a four. The Nuggets, already a very deep and young squad, can afford that sort of gamble and will still get a strong pick at 24 in a deep class.