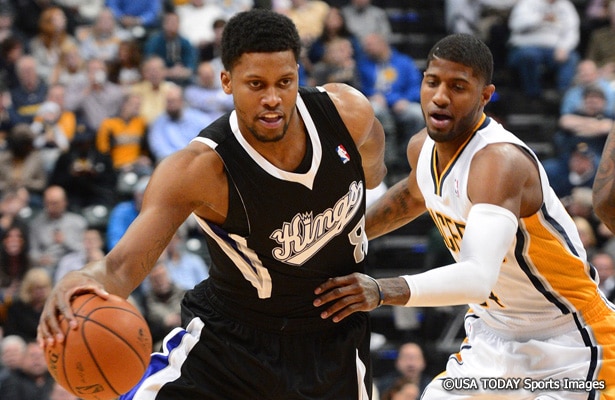 Gay Finds A Home with Kings?

Sometimes what seems like the most unlikely of pairings winds up working better than anyone could have imagined. The Sacramento Kings made an aggressive move midseason when they acquired Rudy Gay from the Toronto Raptors, and while the trade has not resulted in a ton of wins in the short-term, there are indications that Gay might be a big part of the Kings’ rebuilding plan going forward.

Are The Wolves Keeping Kevin Love?

With a small handful of games remaining for most of the NBA, several teams are heading into the offseason with looming doubts and daunting questions; none may be bigger than the Minnesota Timberwolves’ and their future with star forward Kevin Love.

Love’s name has been kicked around in trade rumors for most of the season and it’s expected that Love-mania will resume in full force this summer.

Time For Pacers’ Frank Vogel To Feel The Heat?

If you haven’t been following the league closely over the past two months and just decided to pick up the morning paper and look at the standings, you might be fooled when evaluating the Indiana Pacers.

On paper, the Pacers have the league’s fifth-best record, have already clinched the Central Division crown and own one of the best home records (34-6) in the NBA this season. Dig even deeper and you’ll  notice the team’s 53 wins this season is the franchise’s most since 2000 when they lost in the NBA Finals.

So things are trending up for the emerging Pacers heading into the playoffs, right? Unfortunately the situation in Indiana has gotten progressively worse as the season trudges along.

Charlotte Bobcats center Al Jefferson deserves to be in the Most Valuable Player discussion. This sentence would’ve seemed like a joke before the start of the 2013-14 NBA season, but that was before Jefferson had the best season of his career and transformed the Bobcats from the laughingstock of the league into a playoff team.

Jefferson won’t finish ahead of Oklahoma City Thunder forward Kevin Durant or Miami HEAT forward LeBron James in MVP voting, but he certainly belongs in the conversation and deserves credit for his remarkable season. He also has a strong All-NBA argument.

With the NBA going dark on Monday night in order to give the NCAA national championship all of the basketball-loving eyes that this country has to offer, there are only nine days remaining in the NBA’s regular season. That means this is the final full week of the regular season and these are the penultimate Power Rankings from Basketball Insiders.

Over the course of the season, we have seen the Houston Rockets, Portland Trail Blazers, Los Angeles Clippers, San Antonio Spurs, Indiana Pacers and Miami HEAT all possess the top rank for multiple weeks, but as we said in our Sunday dialogue with Bill Ingram and Joel Brigham, it’s not who you are at the beginning of the season that matters, it is who you are at the end.

There are only eight days left in the NBA’s regular season. Once April 16 rolls around, the offseason will begin for 14 teams. The Los Angeles Lakers are going to be one of those teams for just the third time since 1994. It’s not something they’re accustomed to as an organization and as a result, talk about potential changes they could make have surfaced left and right.

Last night was supposed to be about UConn and Kentucky, two teams who persevered through tough seasons (two in UConn’s case), facing off for a national championship. Instead, with one tweet from Rex Chapman, a former NBA player and a member of the Kentucky broadcast team, the biggest story prior to the tip was that Kentucky head coach John Calipari was set to become the next head coach of the Los Angeles Lakers regardless of the outcome. Calipari’s Wildcats went on to lose the game to the Huskies, although it’d be unfair to blame the loss on anything other than their poor free throw shooting and just how good the Huskies are. Still, it was an unnecessary distraction that really became amplified due to the followings that the Lakers and Kentucky have and the way that rumors can now spread like wildfires with today’s technology.

“KD [Kevin Durant] is a special player,” head coach Scott Brooks said when asked about Durant earlier this season. “Some nights he’s going to have a high-scoring game, but I just like the way he thinks. He thinks about the team. He [takes] great shots and everybody else gets involved.”

That’s particularly what’s so “special” about Durant, as even though he is the most lethal scoring force in the NBA, he still maintains the team’s best interest in mind while out there dominating on most nights. It just so happens that on many nights, his scoring prowess is precisely what the team needs; whether pacing the offense over the course of the action or picking moments to assert himself for a lightning-quick 15-point personal blitz Durant is prone to do at the drop of a hat.

The New Orleans Pelicans were very aggressive last offseason in an attempt to upgrade their talent and make their squad more competitive immediately. The team traded the sixth overall draft pick in the 2013 draft, which became Nerlens Noel, and a top-five protected 2014 first-round pick to the Philadelphia 76ers in exchange for Jrue Holiday and the 42nd pick in the 2013 draft, which became Pierre Jackson. Next, the Pelicans acquired former Rookie of the Year Tyreke Evans along with the rights to Jeff Withey in a three-team sign-and-trade deal that Greivis Vasquez to the Sacramento Kings and Robin Lopez and Terrel Harris to the Portland Trail Blazers.

The two trades would be the Pelicans’ most noteworthy moves of the summer, but wouldn’t be their last. The team stayed active in free agency, bringing in a number of under the radar players such as Greg Stiemsma, Anthony Morrow and Alexis Ajinca as well as re-signing Al-Farouq Aminu to fill out the team’s roster.

Twelve teams have officially clinched playoff berths as the 2013-14 regular season heads into its final week.

Looking ahead to the 2014 offseason, a number of teams in the Southeast, Southwest, Atlantic, Pacific and Central divisions could have significant cap room this summer.

In the final entry of a six-part of a series, where do the five teams in the Northwest Division stand this offseason?

Life After Basketball: The Next Chapter for Powe

He sat courtside, legs barely fitting within the boundaries of the baseline and eyes glued to the game being played on the parquet where he helped win a championship. The banner hanging in the rafters above served as a reminder.

The visions of falling confetti flashed into his mind. He imagined the sights and sounds of triumph, the loud bellows of celebration from his teammates and the raw emotions of attaining the ultimate goal. It happened six seasons ago, but it might as well have been yesterday.

Leon Powe returned to TD Garden last weekend for the first time in three years. He had taken on many roles there since 2007, first as a Boston Celtic, then a member of the opposing team, and this time – most dramatically different – a former NBA player.

During this past offseason, the Nuggets fired long-time head coach George Karl even though Karl had just won Coach of the Year. Then, the Toronto Raptors managed to pluck away the Nuggets’ general manager, Masai Ujiri, who had just won Executive of the Year. The Nuggets hired Brian Shaw, who had no prior head coaching experience, to replace Karl. Shaw had long been considered an up-and-coming assistant coach who would inevitably be hired as a head coach. Tim Connelly was then named the new general manager to replace Ujiri.

When he accepted Jim Dolan’s incredibly lucrative offer, Phil Jackson was well aware he’d have to wait roughly 16 months before he could begin re-shaping and upgrading the New York Knicks’ roster. Jackson’s hands are essentially tied until July of 2015 because, regardless of any moves he may make this offseason, New York will be well over the salary cap during the 2014-15 campaign.

The triumvirate of Amar’e Stoudemire, Andrea Bargnani and Tyson Chandler will account for $50 million in salary next season, which means it is essentially impossible for Jackson to get under the cap prior to these contracts coming off the books. However, that doesn’t mean Jackson won’t have the opportunity to make an immediate imprint on his new franchise.