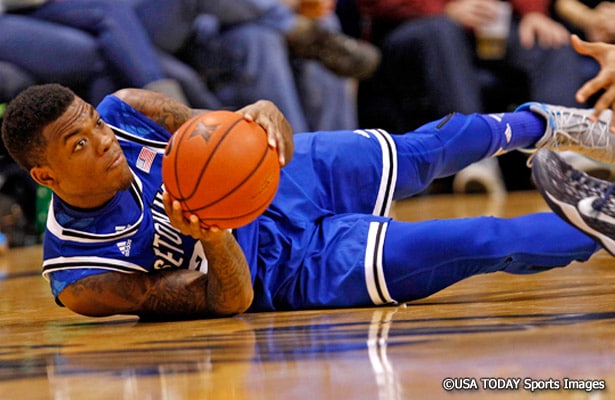 Barring a surprise run to a Big East Tournament championship, senior guard/forward Fuquan Edwin’s career is going to come to an end without ever playing in the NCAA Tournament.

That alone would cause a lot of people to write him off as a NBA Draft prospect.

Edwin isn’t the first NBA hopeful to come along who hasn’t been able to guide his team to prominent, national success. There have been plenty prior, and many of them go on tangents about what was done wrong by their head coach, how they were misused and that there’s far more to their game than we’ve seen so far. That’s not Edwin, though. In fact, as he gets set to play potentially the final game of his career, he has nothing but positives to say about his time at Seton Hall.

“It’s definitely been a pleasure playing at the university with the great coaching staff that we have,” Edwin said to Basketball Insiders. “I think coach helped me tremendously in developing my game. We haven’t really won games or got far in my career, but it has definitely been a blast overall playing these last four years.

“The most difficult part is that not too many people want someone who is not a winner or who doesn’t win games. Just not being able to play postseason has been tough, being at home and watching on TV as guys boost their own stock, it’s really tough.”

Whether it’s right or not, winning does go a long way in terms of the NBA Draft. Adam Morrison’s dominant career at Gonzaga led to him being the third overall pick in the 2006 NBA Draft over the likes of Rudy Gay, Brandon Roy and Rajon Rondo most notably. After a remarkable tenure at BYU, Jimmer Fredette was chosen 10th overall, ahead of Klay Thompson, Kawhi Leonard and Nikola Vucevic among many others who should have gone ahead of him.

Edwin won’t have a winning background to lean on and get overrated by as he auditions for NBA teams in the coming months leading up to draft night in July. The top team achievement throughout his time as a Pirate was an NIT appearance during his sophomore season, but the chances of any team using that as a reason to justify giving him a shot are slim to none.

What does stand to work in Edwin’s favor is the way he’s handled the struggles. When you’re winning at a high level and everything is going your way, life is easy. Putting in the time in practice to work on your weaknesses is a lot more difficult when the fruits of your labor aren’t producing wins. The trials and tribulations that Edwin has endured over the last four years could potentially make him a fine pro down the line.

Possessing an unfaltering work ethic will go a long way in helping Edwin shake the stigma that stems from playing for a middle-of-the-road program like Seton Hall over the last couple of years. The NBA season is a grind with highs and lows. It’s the guys who are results driven, rather than process driven like Edwin, who quickly get weeded out.

What will also help a great deal is that Edwin is a rare breed as a basketball player. He takes pride in his defense like few others in the country do. His 2.9 steals ranks per game ranks him third in the country. While there may be prospects with better all-around games, or far more wins on their resume, if an NBA team is looking for someone who can defend their own position there may not be a better option than Edwin.

Coming in at 6’6 with long arms, great quickness, natural defensive instincts and a real dedication to defending his man, Edwin has all the tools necessary to be a factor on that end at the next level. He doesn’t have any misconceptions about who he is, either. He’s not hoping to become a 20-point-per-game scorer at the next level, instead he hopes to be like former San Antonio Spurs forward Bruce Bowen.

“He likes to get in people’s mind, get in their head,” Edwin said. “On defense I’d do anything, if I have to talk, or be all up in my opponent.

“I like to gamble, sometimes it doesn’t work in my favor but most of the time it does because of how much I understand the game and knowing when they’re going to pass the ball. I’ll make it seem like I’m not looking, but I really am.”

Edwin did state that he would like to become a better ball handler, as he’s primarily projected as a catch-and-shoot threat on offense at the next level. The ability to create off the dribble and better utilize his impressive first step would be necessary additions to help him stick in the league.

Bowen got his shot because of his defense, but it was when he became a serviceable player offensively that he finally started to get an opportunity.

The same could be the case for Edwin, who is already a much improved player offensively. He’s scoring 15.2 points a contest on 46 percent shooting from the field and 35 percent from deep. And, after being a perennial 60 percent shooter from the free throw line in the first three years of his career, he’s now hitting at an 80 percent clip.

True to his approach on the floor, Edwin isn’t giving up hope on this season. He had very little interest in talking about the draft process because there’s still a chance that Seton Hall’s season could be extended. And, until that possibility is out the window, that’s where his focus is.

“I still have unfinished business,” Edwin said. “Every game counts for me, it’s not like I’m a lottery pick or anything like that. I need all these games.”