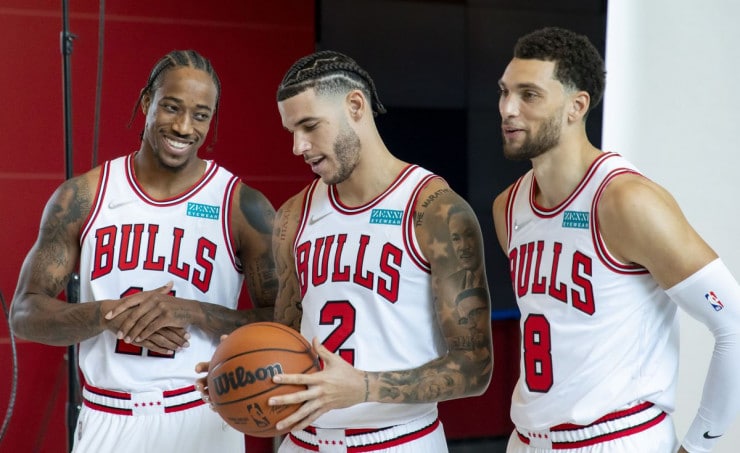 The regular season is less than three weeks away and for the first time in three years, teams are preparing for a rigorous 82-game schedule. Rosters have been retooled, coaches have been replaced and every organization is full of hope and optimism. The season will begin to take shape over the next few months, as teams try to gauge where they stand in terms of the big picture.

The Eastern Conference is widely considered to be the superior conference this season. The talent at the top is quite impressive, but it is really the depth of the East that makes it truly fascinating. The middle of the conference is especially juicy, with ten teams likely battling for four playoff spots. The Magic, Pistons and Cavaliers are all rebuilding but everyone else is of the belief that this is their year.

The Celtics have gone through several key changes in the offseason but they still have their dynamic duo of Jayson Tatum and Jalen Brown. The Pacers are finally (sort of) healthy and have completely remedied their coaching situation. The Hawks, Knicks and Hornets are all on the rise but are they ready to take that next step?

On top of all of this are the defending champions, ready to begin their quest to repeat. Giannis Antetokounmpo and the Bucks aren’t going anywhere, and are ready to take on all challengers. With all of that being said, here are the five burning questions that will determine how the regular season shapes up for the loaded East.

How does the Ben Simmons saga end?

The ongoing standoff between Simmons and Philadelphia continues, with no resolution in sight. The All-Star forward is adamant that he will never play another game for the franchise, and it appears as though his teammates are ready to move on as well. The worst part for Philadelphia is that with all of this information going public, it makes finding a deal for him much more difficult. There is no leverage, and with his meltdown in the playoffs, his trade value feels incredibly low right now.

Joel Embiid, Tobias Harris, Matisse Thybulle & Sixers players were going to fly to LA this week to meet with Ben Simmons to convince him to stay with Sixers, but Ben told them not to come because he is not changing his mind on wanting a trade, according to @ShamsCharania pic.twitter.com/Tnvwcw7sfa

A handful of teams have been rumored to be in play, including the Trail Blazers, Warriors, Timberwolves, Cavaliers and Spurs. Several of these teams have already cooled on the idea of making a move for Simmons, and this strange situation continues to become even more bizarre. Depending on what type of return the Sixers end up getting, they could continue as title contenders or they could get swallowed up in the quicksand that is the loaded Eastern Conference. The latter is almost a certainty, should they not be able to move him at all.

As deep as the Eastern Conference is this year, there is a clear team at the top. Although the Bucks return most of their same roster, the defending champions are still pegged behind Brooklyn heading into the season. The Nets nearly knocked off the Bucks in the postseason behind a masterful performance by Kevin Durant. With both Kyrie Irving and James Harden sidelined, Brooklyn was still that good.

Brooklyn’s “big three” will always get the spotlight, and for good reason. These are some of the greatest offensive talents the league has ever seen. Durant is widely regarded as the best player in the world right now and should all three remain healthy over the course of the season, there is no reason why they should not be the favorites to make it to the Finals.

That being said, the Nets are much more than just their three stars. Joe Harris and Blake Griffin are essential to their success. Bruce Brown, Paul Millsap and LaMarcus Aldridge will all play vital roles this season. The addition of Patty Mills may prove to be the most impactful move of the offseason. They still have the likes of James Johnson, Sekou Doumbouya, Jevon Carter, Nicolas Claxton and Cam Thomas as well. Brooklyn is oozing with star power but they are also incredibly deep.

After reaching the NBA Finals two years ago, the HEAT regressed and had a disappointing season last year. They used the offseason to reload and are expected to be title contenders this season. Despite their struggles, they still managed to have the seventh-best defensive rating last season. That will only improve with their recent additions of Kyle Lowry, PJ Tucker and Markieff Morris. Add to that the possibility of getting a healthy Victor Oladipo back on the floor, and that is a nightmare for any offense.

"I'm coming in here and just being me."

Kyle Lowry talks with @realStanVG on his new role as a leader in the @MiamiHEAT locker room. pic.twitter.com/hMDjkCiFpZ

Jimmy Butler and Bam Adebayo are still the backbone of this team and will anchor the defense. Lowry has a knack for drawing charges, and finished second in the league last year in that category. His leadership and high IQ will also help the younger player’s development, and help hold others accountable on the floor. Defense is the name of the game when the playoffs begin, and if Miami can keep these guys healthy, they just might be able to stop anyone.

Can the revamped Bulls elevate to become title contenders?

If Miami didn’t win the offseason, it was definitely Chicago. After making the move at the trade deadline to acquire Nikola Vucevic, the Bulls had a disappointing end to the season. Much of that was due to the time that Zach LaVine missed as he dealt with COVID. Once the two were able to establish some chemistry late in the season, they were already out of the playoff picture.

Chicago swung for the fences this summer, essentially throwing away their future draft picks and cap room in order to bring in DeMar DeRozan and Lonzo Ball. These are two massive upgrades to the roster, and give the Bulls one of the most intriguing starting lineups in the league, when you factor in second-year player Patrick Williams. He should be a much better fit alongside Vucevic than Lauri Markkanen was. The Bulls will need as much defense as they can get, and that is his specialty.

Williams recently suffered a severe left ankle sprain and will miss the next 4-6 weeks of action. Coby White is also out after having shoulder surgery but should be able to return in November. With the additions of Ball, DeRozan and Alex Caruso, White will see his role reduced. He and rookie Ayo Dosunmu will be battling for minutes this season. Chicago’s depth has improved with these moves, as well as the additions of Derrick Jones Jr, Alize Johnson, Stanley Johnson and Tony Bradley. How it all fits together is the million-dollar question for this franchise.

Will the Raptors return to reality?

Last season was difficult for everyone, but especially the Raptors. The entire franchise operated thousands of miles from home and was not able to see their families. Now that they are free from Florida and can get back to playing their home games at Scotiabank Arena in Jurassic Park, Toronto his hoping that everything else returns to normal as well. To say that last season was a disappointment would be a massive understatement.

The organization has moved on from Lowry, found a gem in Chris Boucher and put a lot of faith in Pascal Siakam. With Fred VanVleet, Gary Trent Jr and Goran Dragic handling the backcourt, the focus will be on their frontcourt play. OG Anunoby seems primed to break out this season and Boucher, Precious Achiuwa and rookie Scottie Barnes are budding young talents ready to blossom. If Siakam can return to form, the Raptors just might be the sleeper team that no one wants to face when the playoffs roll around.