Was Portland’s Loss to Philadelphia Beneficial?

On Saturday, the Portland Trail Blazers were destroyed by the Philadelphia 76ers, 114-89. For the 76ers, who have an NBA-high 38 losses, it was just their fifth win of the season and by far their best game. In fact, the 25-point win was the Sixers’ largest margin of victory since the 2013-14 season. Five Sixers players scored in double figures and rookie Jahlil Okafor led the way by dominating Portland’s frontcourt with 25 points (on 12-16 shooting from the field) and 10 rebounds. 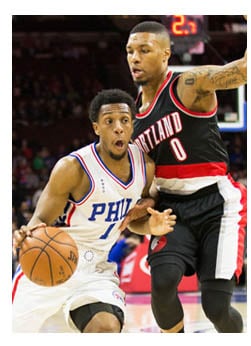 A blowout loss to the worst team in the NBA can destroy a team’s confidence, kill all of their momentum and lead to finger-pointing. But rather than fracturing the team, the loss to Philadelphia had the opposite effect on the Blazers. The group took the loss as a wake-up call, coming together as a group, acknowledging that they weren’t doing the things that led to their earlier success and responding well to constructive criticism from their coaches.

In the following game, the team was refocused and locked in against the Washington Wizards. They were determined to get a big bounce-back win on the road to rid the horrible taste of defeat to the NBA’s worst team from their mouths. They executed on Monday and got the much-needed victory over the Wizards, 108-98.

After the win, Blazers head coach Terry Stotts expressed how proud he was of his young team.

“They are high character guys, they are very competitive, they bounce back, they are pretty resilient,” Coach Stotts said. “I have always been pretty proud of how we compete.”

Several Portland players admitted that the Philadelphia loss caused them to take a step back and accept some harsh truths about how they had been playing and approaching games.

“[We were] pretty frustrated with how we played,” Meyers Leonard said of the loss to Philadelphia. “We just really thought about it more, not from a basketball side, but just how you approach the game and how you have to respect each team.”

After the loss to the Sixers, the coaching staff told the players that they had been looking like a completely different team and getting away from the things that made them so successful this season. After the Philly loss, the players were extremely receptive, acknowledged their mistakes and vowed to turn things around.

“[They told us] that we weren’t ourselves,” Damian Lillard said of the coaches’ message. “Everything that we had been doing up to that point, we stopped doing. They weren’t sure why. It wasn’t just one thing or two things. It was so many things. It was just like, ‘We know better and there is no excuse for it.’”

The Blazers’ offense (which is currently ranked eighth in the NBA, scoring 103.3 points per 100 possessions) had been struggling; their 89 points against a dreadful Philadelphia defense made that clear. The team’s defensive intensity was lacking as well, which had been a problem for quite some time but was discussed after Saturday’s loss.

“I thought the staff handled it very well,” Mason Plumlee said. “It wasn’t a situation where they said, ‘Flush it, forget about it.’ We addressed some things and then guys were really locked in coming into this game [against Washington]. We played with energy from the jump and we competed. … Coach made some good points. I thought guys came back really well.”

When asked what changed from the Philadelphia game to the Washington game, Plumlee didn’t hesitate: “The energy. It was just a [different] mindset defensively.”

By putting the Philadelphia loss behind them quickly, Portland can get back to focusing on trying to make the playoffs. They have exceeded all expectations this year and are currently 19-25, which puts them just a half game out of the eighth seed in the Western Conference. Lillard was happy to see the Blazers move past the previous loss and get an important win over a talented Wizards team.

“It was huge,” Lillard said. “We were playing well. Then we come out against Philadelphia and we stink it up. [Against the Wizards], we had our minds right, guys came in prepared and we locked in on the scouting report.”

No team wants to lose to the tanking Sixers, especially in embarrassing fashion. Some teams faced with Portland’s scenario may have imploded, with blame getting tossed around and tension developing between players. That can be the start of a downward spiral.

Instead, for the Blazers, it seems this particular loss was beneficial and may actually help them in the long run. The embarrassing beat-down at the hands of the league’s worst team snapped them out of a lull they had been in and the coaching staff – realizing that the players were receptive – used it as an opportunity to confront the team about some of the issues that plagued them.

Now, if all goes as planned, the Blazers can return to playing to their full potential.

Orlando Magic guard Victor Oladipo recently sprained his knee and missed Monday’s game against the Atlanta Hawks. But prior to the injury, the 23-year-old was putting up some his best stats of the season. 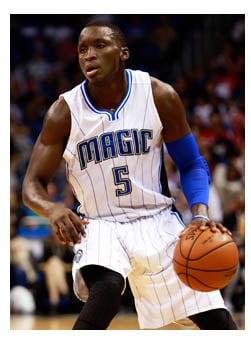 Over the last five games, he averaged 20.4 points, 6.0 rebounds, 4.2 assists and 1.8 steals. After struggling with his shot for some time, he had finally found his stroke – shooting an impressive 53.7 percent from the field and 66.7 percent from three-point range.

The problem is that Oladipo’s impressive numbers haven’t translated to wins for Orlando. During that five-game stretch in which he posted those solid numbers, the Magic were 1-4. This season, Orlando is 6-11 with Oladipo in the starting lineup compared to 13-7 when he comes off of the bench.

The offense doesn’t seem to flow as well when Oladipo is on the floor and while his shooting has been better lately, he is still hitting just 40.5 percent of his field goals on the season. Those struggles are part of the reason why head coach Scott Skiles adjusted the starting lineup to include Evan Fournier and Channing Frye, both of whom can spread the floor for fellow starters Elfrid Payton, Tobias Harris and Nikola Vucevic.

While Oladipo has said all of the right things on the record since being moved to the bench, his body language has been poor and it’s pretty clear he’s upset with the demotion.

He had viewed himself as the Magic’s star player, which was understandable since he was the No. 2 pick in the 2013 NBA Draft and arguably the best player in the top 10 of that class. After his early success in the NBA, he was anointed by the team as the face and future of the Magic franchise.

The move to the second unit had to come as a surprise to him. He entered this season with All-Star aspirations and now finds himself not even starting, which has to be a humbling experience for him.

It’s also worth noting that this is Oladipo’s first time playing for an NBA coach who doesn’t mince words and isn’t afraid to call out players publicly. Former head coach Jacque Vaughn was very much a players’ coach and would rarely speak negatively about his team. Skiles, on the other hand, has been very critical of his players at times and benched entire lineups if he doesn’t like their effort or level of production. Skiles, a former point guard, demands a lot from his guards and Oladipo is still adjusting to his new coach’s system.

Oladipo has now come off the bench for 20 games and he is averaging 13.5 points, 4.9 rebounds, 4.0 assists and 1.3 steals on the season. He also continues to provide solid perimeter defense for Orlando, which has really helped the Magic. Oladipo’s effort on that end of the floor coupled with Skiles’ defensive schemes have the team playing much better defense this season.

Recent injuries to Payton and Fournier forced Oladipo back into the starting lineup, but it seems like he’ll return to the bench once the team is at full strength. He needs to completely buy in to his new role rather than worrying about starting.

If Oladipo embraces being a reserve and continues to put up solid numbers, he could very well be in the mix for the Sixth Man of the Year award. He has the talent and will get enough touches to be a legitimate candidate for the award. However, he must help Orlando win games and let the game come to him a bit more. Critics point out that he isn’t producing within the flow of the offense and, at times, tries to do too much. But this is likely because he’s trying to win his starting job back, which is understandable for a young player who has never been benched in his career.

At the end of the day, Oladipo needs to do what’s best for the team and accept his role as team’s sixth man as long as Skiles plays him there. Until he fully embraces it, the Magic will likely continue to struggle. They have currently lost three straight games and dropped seven of their last 10 contests. This has caused them to fall out of the playoff picture – to the ninth seed – in the highly competitive Eastern Conference.