In the National Basketball Association, experience is not only the best teacher, it is the only teacher, and in both Game 2 and Game 3, the Golden State Warriors have looked more like remedial students than Mensa material.

Fortunately for them, a win in Game 4 will put them right back on track. With home court advantage, the Warriors would certainly like their chances if the 2015 NBA Finals became a best-of-three series. 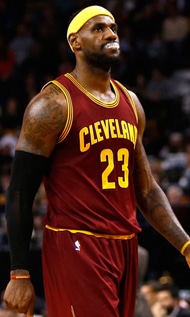 But the last time a LeBron James-led team held a 2-1 series lead in the NBA Finals, they prevailed in five games. It was back in 2012.

What I will always remember about the 2012 NBA Finals is Kevin Durant. I observed his pain, first-hand.

I trailed Durant in the moments immediately following the buzzer of Game 5. I vividly remember his tears. I remember him sitting in his locker stall in the visitor’s locker room for upwards of 10 minutes, not looking up and not saying a word to anyone. His iPhone was his refuge and he sat staring at it, his long slender fingers moving a mile per minute.

Durant, no doubt, was responding to the hundreds of text messages he had received.

“The future is bright.”

“Next year will be different.”

I imagine those were among the messages Durant received, although I obviously hadn’t read them.

I remember his long, slow walk from the visitor’s locker room at the American Airlines Arena to the podium. Normally standing tall and proud, Durant would gracefully glide. But at this moment, he was physically broken. His shoulders were slouched and his head hung, the most appropriate comparison was a wilting rose.

Here, Durant was a student who had just been schooled. The bell had rung, so class, and the series, was over.

The Thunder went out with a whimper, and as Durant finished addressing the media—after he had dried his tears and composed himself—he ran into Dwyane Wade. Wade, with the Larry O’Brien trophy in his left hand, extended his right hand to Durant.

“I know we gonna see y’all again,” Wade said to him. “Just keep your head up.”

Durant nodded and said nothing. He found Russell Westbrook and together, the two slowly walked out of the arena.

I now wonder if the same fate awaits Stephen Curry.

Behind the greatness of Stephen Curry, these Golden State Warriors have taught us a thing or two about what it means to win big in the NBA. At the very least, they have proven to us that small ball and a reliance on three-point shooting can bring a team to the cusp of a championship under the right circumstances.

The Warriors have spent the better part of 100 basketball games busting up adages and defeating a lot of the preconceived notions we have long held about what it takes to win at the highest level.

But if there is one thing that they have yet to disprove, it is that a team needs its heart broken before it can emerge as a champion.

While Durant sat in his locker and during his encounter with Wade, he felt something he had never felt before—the pain of seeing one’s lifelong dream snatched up from under their nose.

It is a pain that the great majority of his predecessors had felt before him. Dirk Nowitzki, Kobe Bryant, Tim Duncan, his challenger LeBron James and even Michael Jordan.

In those moments, a player finds himself. His pain consumes him and he resolves to do everything in his power to pursue winning.

The question we must then ask ourselves is not whether the Warriors are good enough to become champions, because they are. But so were Durant’s Thunder.

The real question is whether these Warriors are good enough to defy history, because the great weight of evidence has taught us that on the continuum of greatness, there are no shortcuts. Epic, flaming failure, it seems, has historically been a prerequisite for success.

Heartbreak, despair and darkness—in this league, that is what forges a champion. And to this point, the Warriors simply have no pain reservoirs from which to pull. For every player on their roster, this is their first NBA Finals appearance.

For all 46 of minutes in Game 3, James pushed. He gave his all because he has resolved to do everything in his power to ensure that his teammates, his fans and his city do not endure the pain of 2007 again.

Curry could not match that urgency and everyone wants to know why.

Make no mistake, Steve Kerr is the coach of the more talented team, especially as the Cleveland Cavaliers do battle without three-fifths of their starting lineup.

But as the Warriors face a must-win Game 4 on the road, these young, inexperienced and perhaps innocent Warriors find themselves in a precarious position, needing a win in the worst way.

On this stage, with these stakes, the Warriors are eerily reminiscent of Durant’s 2012 team.

It was so much and it happened so soon. En route to winning the Western Conference in 2012, Durant led his team to series victories over each of the immediately preceding three Western Conference teams that had won an NBA championship. Dirk Nowitzki’s Dallas Mavericks, Kobe Bryant’s Los Angeles Lakers and Tim Duncan’s San Antonio Spurs were all written off in four, five and six games, respectively.

The Thunder arrived at the 2012 NBA Finals having experienced a meteoric ascent. They had paid no dues, built no equity and were the equivalent of basketball champion trust fund babies.

The same could not have been said for James. Before he opted to join Wade in Miami to attempt to build a dynasty, James had experienced monumental disappointment, and by the time he arrived at the 2012 Finals, he was still in search of the elusive championship that he failed, twice over, to corral. Sure, in 2007, his Cavaliers, to an extent, were simply happy to be there, but that didn’t make their being swept by the Spurs any easier for James to swallow.

When James arrived at the 2012 Finals, now, in his third attempt to live championship glory, he had a hardened heart. In the preceding round, he had exorcised his demons.

On June 7, 2012, for James, the road diverged. Before that day, his shortcomings had defined him, but on this day, he would be anointed and put on a performance for the ages that signified his true rise as king.

With the wound from his HEAT’s 2011 NBA Finals loss to the Mavericks still fresh, James and his team had to travel to Boston for Game 6 of the Eastern Conference Finals. Thanks in large part to Kevin Garnett’s 26-point, 11-rebound effort in Game 5, James saw his team heading back to Boston, trailing 3-2 and on the brink of elimination.

In Game 6 against those pesky Celtics, James emerged as the dark knight, beating, battering and bruising the Celtics for 45 points, 15 rebounds and five assists. The Celtics expected a fierce battle. Instead, they were ambushed by a blitzkrieg, and James was the general. What stands out more than the performance itself, was James’ demeanor. Throughout the contest, he was stoic. He smiled not once. He barely acknowledged anyone on the court. He was on a mission; he was possessed.

Since then, we have seen a lot from James. Successes, failures, squandered opportunities and seized moments. Never before that point, however, had we seen his desperation truly overcome him.

Now, heading into Game 4, we await that type of performance from the league’s reigning Most Valuable Player.

Must a team truly have its heart broken before they can collectively become champions?

Can a 40-year drought, a brilliant head coach and perhaps the greatest shooter this league has ever seen overcome that? 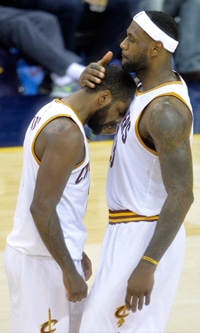 But the great weight of evidence suggests that there is no shortcut as it relates to the rights of passage. James knows that quite well.

As he continues out in search of fulfilling what many in Cleveland feel is their destiny—to finally become champions—we must continue to watch.

James, the unquestioned trans-generational player, his risen majestically and ascended to his throne as king. In his fifth straight NBA Finals appearance, James has no Kyrie Irving, no Kevin Love and no Anderson Varejao.

He also has no excuses.

His unprecedented performance and leadership and his mission to single-handedly topple the inexperienced juggernauts and the reigning MVP—that is why we watch.

Whether or not the Cavaliers will succeed, we do not know. But what we do know, right now and at this moment, is that Curry needs to prove something.

As Game 4 of the 2015 NBA Finals awaits, I recall Durant’s long, slow walk to the team bus as he made his only appearance in the NBA Finals. And as I look back on it, I realize, it was too much, too soon.

Quietly, after Game 2 and Game 3, I wonder if the same fate awaits Stephen Curry.