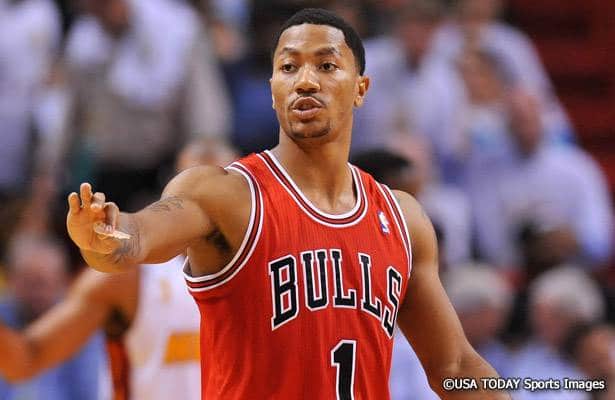 Thibs says Rose is out for the year. Again.

Over the weekend, Mitch Lawrence of the New York Daily News reported that “the Bulls really are expecting Derrick Rose to make it back from his latest knee injury in time for the playoffs.”

Considering that the playoffs are just a few weeks away and, as far as we know, Rose hasn’t returned to practice yet, this would be a huge surprise. Especially considering the Bulls have maintained that Rose is going to miss the remainder of the 2013-14 season as he recovers from torn medial meniscus in his right knee. General manager Gar Forman and head coach Tom Thibodeau have gone on the record to say this.

Well, in response to Lawrence’s report, Thibodeau did it again on Monday evening. Thibodeau told Friedell that Rose will be out for the year, refuting the rumor that the Bulls are expecting Rose back for the postseason.

If Rose were to return, it would make things much more interesting in the Eastern Conference, where the Indiana Pacers and Miami HEAT are clearly a notch or two above every other team, even with their recent struggles. The former MVP, who missed all of last season with a torn ACL, would certainly make the Bulls a scarier team.

It’s worth pointing out that the recovery time for a repaired meniscus can range from three to six months, so it’s not like a return for the postseason would be too far ahead of schedule since the injury occurred on Nov. 22. However, it doesn’t sound like the Bulls are even considering a Rose return at this point.

Duncan May Retire After Season?

When asked if he’d honor his contract through next season, Tim Duncan said he’s taking it “game by game.”

Earlier this season, former NBA head coach and current ESPN analyst George Karl made headlines when he said that he’s heard “whispers” that Tim Duncan would retire after the 2013-14 season.

“I got a couple of phone calls, one from San Antonio, that said that Tim Duncan’s thinking this is going to be his last year,” Karl said on the air.

Shortly after, Duncan told reporters that he didn’t know who George was talking to and that he hadn’t made a decision one way or the other about next season.

Now, Duncan retirement rumors have surfaced once again. In Yahoo! Sports’ latest NBA power rankings, Spears includes the above note. It sounds like Duncan is still undecided about his future, but that means there’s a possibility that this could be his last season.

The four-time champion isn’t the type to make a big deal out of his retirement or arrange for a farewell tour during his final season, so it’s possible that he’ll just go out quietly this summer. If that is the case, one of the greatest players in NBA history will be calling it a career after an incredible run.

Moon says he thinks he could help a playoff club in this final month push (especially on D). Says he still runs/jumps the same as ever.

Jamario Moon played five seasons in the NBA, suiting up for the Toronto Raptors, Miami HEAT, Cleveland Cavaliers, Los Angeles Clippers and Charlotte Bobcats. His most recent stint in the NBA came with the Bobcats in the 2011-12 season, when he played eight games with the team and averaged 2.3 points in 15.4 minutes.

After leaving the Bobcats, Moon tried to catch on with an NBA team, but didn’t get signed. From November 2012 to January 2014, he played for the Los Angeles D-Fenders of the D-League. This season, in 15 games with the D-Fenders, he averaged 14.3 points, 6.9 rebounds, 3.5 assists, 2.7 blocks and 2.1 steals. In January, he left the D-League to sign with Olympiacos of the Greek League.

As Smith notes, he’s back in the United States after being released by Olympiacos and he’s looking to resume his NBA career. While the 33-year-old is hoping to sign with a team and contribute down the stretch, it remains to be seen if there’s any interest. The fact that he hasn’t played in the league since 2012 suggests that teams just haven’t called.

Over the course of his NBA career, Moon averaged 6.3 points and 4.3 rebounds.