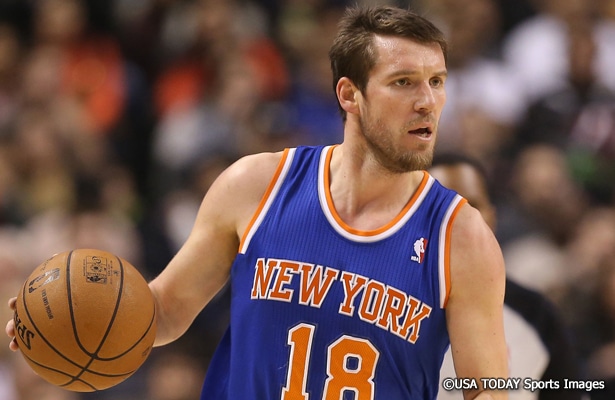 The long rumored divorce featuring Metta World Peace, Beno Udrih and the Knicks was close to being finalized on Saturday with the club agreeing to negotiate buyouts with both disgruntled veterans after just 55 games.

A source familiar with the talks said that even if the buyouts were not approved by the NBA prior to Saturday’s game against Atlanta it was unlikely that Metta and Udrih would be available to play.
If fact, Metta took to Twitter to thank Knick fans and break the news that he was close to being waived by the team he grew up supporting.

via Frank Isola of The New York Daily News

World Peace and Udrih’s buyouts have not been completed yet. Once they are completed, it will take them a couple of days to clear waivers. If you include them in the crop of Shannon Brown, Glen Davis, Jared Cunningham, Antawn Jamison and potentially Danny Granger, who underwent a physical with the Philadelphia 76ers on Friday morning but could end up being bought out as well. The Charlotte Bobcats are always progressing towards a buyout with Ben Gordon according to ESPN Los Angeles’ Ramona Shelburne. It looked like Jason Terry was going to be a part of that group after being traded to the Sacramento Kings, but instead he’s going to spend the rest of the season away from the team as he rehabilitates his injured knee.

Nonetheless, that’s a quality group of proven, experienced players, outside of Cunningham who is more attractive for a young team with available playing time to help him develop as he’s yet to truly arrive as a pro, for contending teams to pursue.

Typically free agency is only a big deal in July, but depending on who lands where, the balance of power in both conferences could be affected. Role players are critical in the playoffs and all of those veterans are capable of making a significant impact.

The market for Luol Deng

We’re surprised the Cavs did not move Luol Deng. He’ll be gone on July 1, no later than a minute past midnight, and despite an Achilles injury that prevents him from practicing on most days, he’ll be high on everyone’s free-agent list. The Mavs, Lakers, Celtics, Magic and Charlotte are all interested. Why not stay in Cleveland? Kyrie Irving doesn’t make players around him better and Dion Waiters is a me-first player

Via Mitch Lawrence of the New York Daily News

The Cavaliers were limited in their attempts to trade Deng because they could not package him with anyone else on their team, otherwise the chances of him being moved would have been a lot higher.

Deng undoubtedly heard the rumors about being shopped, and those too could work against him staying in Cleveland, but there’s one equalizer that Lawrence doesn’t mention: money.

As much as Deng may hate being in Cleveland and not believe in their potential, he’s not in the business of walking away from money. If the Cavaliers lose him, it’s either going to be because he was willing to take less from one of the teams Lawrence listed or because Cleveland simply opted to not commit the kind of money they needed to in order to keep him. Just like with Kyrie Irving, the Cavaliers hold far more leverage than most realize.

The Cavaliers could work out a sign-and-trade with Deng to ensure that they get some kind of value in return for him. Either way, it’s not all doom and gloom for them regarding Deng. If they’re willing to pay the price they can re-sign him; if they aren’t, it’s in his best interest to have them work out a sign-and-trade so that he can get a five-year deal, given that one of those potential suitors is willing to give him that.

The Atlanta Hawks signed Dexter Pittman to a 10-day contract.

The Cleveland Cavaliers signed Arinze Onuaku to a 10-day contract.

Pittman is a true center who will give the Hawks some much needed size and strength at the center position. The Miami HEAT invested a lot of time in developing him and he’s still young and talented enough to believe he can be an impact player. However, the game has somewhat shifted away from traditional centers like himself. If he can’t keep up with the pace of the game and utilize his incredible physical gifts, he won’t be with the Hawks past this contract.

Armstrong has also spent a couple of seasons in the NBA, but never really capitalized on his opportunity. He’s known for his defense and rebounding, two things that he’ll have to excel at in order to stick with the Warriors. The Warriors are really thin up front, but they’re running out of time to audition guys so Armstrong is going to have to prove himself immediately.

The same is the case for Onuaku, who played a short stint with the New Orleans Pelicans at the beginning of the season. He’s getting his shot because of what he can do on the defensive end, which bodes well for him on a Mike Brown coached team.